My wife was there on Saturday and, yes, still cash only.

Ok, so what is the deep dish vs tavern style vs pequods(! ?) thing?

Deep dish is what most non-Chicagoans picture when they hear “Chicago-style pizza.” It has a thick crust, as well as a very thick layer of toppings. Pizzeria Uno was the originator of the style, and Lou Malnati’s (started by a guy who originally worked at Uno, and whose father was instrumental in orginating the style) is another big local chain for deep dish. This is a Pizzeria Uno pizza:

“Stuffed” is a variation on deep-dish, and is what Giordano’s (another local chain) offers:

Pequod’s is a local place with their own variation on deep dish (I’ve not eaten there, but it’s well-regarded). Their pizza:

“Tavern style” is the kind of pizza that is actually more commonly eaten in Chicago, and more commonly made by the local pizza places. Very thin (and usually crisp) crust (the term “cracker crust” is often used), and usually cut into squares, like so:

Gosh, what you’re showing there bears no resemblance to the garbage they were passing off as “deep dish” pizza on Navy Pier when we were there in 1998. Huge crust with some meaty goo in the centre. Yuk!

And here’s a Lou Malnati’s deep dish which is not as doughy as the deep dish in the first photo (which reverse search tells me is an Uno’s pizza. Which is weird, as I don’t remember it being anywhere near that doughy):

Here’s another image of Uno’s pizza which looks more like I remember: 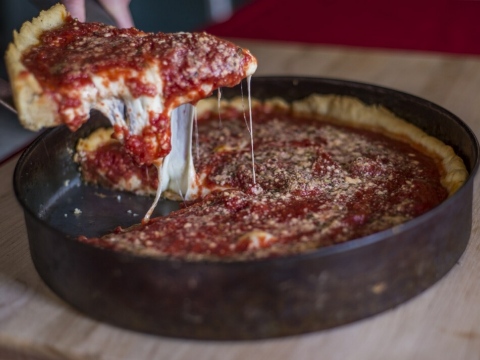 Those pizza images should be spoilered. Now I want Chicago pizza RIGHT NOW !!! and I live 600 miles away.

I have been thinking about pizza for dinner ever since I posted those. Thankfully, I can get Chicago pizza.

From Wisconsin, I used to drive down to Harvard, IL then take the Metra train downtown. Since Covid, I haven’t wanted to get in an enclosed tin can with strangers, so I haven’t been to The City in over a year.

But those pizza pics…! Ahhhhh…
I’ve never had Lou Malnati’s or Pequad’s. That cannot continue.

I think I may just have to drive down to the Loop and pay to park (I’ll try SpotHero). But now I’m tempted to start early and have a “What Would NAF1138 Do?” day…

I know your daughter is in to astronomy, but is she also into dolls? If so, and she has an American Girl doll, I know more than one girl who insisted on a visit to American Girl Place.

Regardless, dollhouses can be fun for anyone. I recommend the Thorne Miniature Rooms at the Art Institute, and Colleen Moore’s Fairy Castle at the Museum of Science and Industry. I don’t think I’ve ever gone to MSI without stopping to see that dollhouse – it’s incredible.

In college, when I changed buses in Chicago, I always went to a Cubs game.

Years ago Gino’s East (? I think it was “East”) opened a restaurant in Manhattan Beach (CA). I worked with some people from Chicago who raved all the time about Chicago style pizza, so we went. Once.

Did NOT like. The crust was too hard and tasted like corn meal. The “filling” was too soupy, and the veggies were so finely chopped, it was hard to distinguish among them. Is Gino’s not considered representative?

That just sounds like the kitchen made a bad pizza. Remains to be seen whether they were better on other nights…

But that sounds like poorly-cooked “Stuffed Pizza”, like Giardano’s… did it have a ton of cheese, too?

Or my guess would be that it was just cooked too hot, too quick. The crust was overdone, the filling underdone. I’ve never had pizza like that in Chicago.

Gino’s East does a deep dish (as opposed to stuffed). It’s been ages since I’ve eaten their pizza – probably around 25 years, but they’re a reasonable representation of the style. I have not idea what a location out in California was like.

The crust of deep dish can have a cornmeal taste (and a lot of online Chicago deep dish pizza recipes list is as an ingredient), but a lot of time that just comes from using corn oil as an ingredient. I note that the frozen version does not list corn meal but does list corn oil in its ingredients, and a trusted pizza website says Gino’s is 95% corn oil, 5% olive oil for the oil in their crust (though their frozen lists olive oil before corn oil), and no cornmeal. But it definitely has that corn-mealy taste.

As for texture, it does have a stiffer texture than something like a focaccia or a normal pan pizza. It shouldn’t be “hard,” but it’s not like a soft breadstick, either.

The pizza shouldn’t be soupy.

Years ago Gino’s East (? I think it was “East”) opened a restaurant in Manhattan Beach (CA). I worked with some people from Chicago who raved all the time about Chicago style pizza, so we went. Once.

Did NOT like. The crust was too hard and tasted like corn meal. The “filling” was too soupy, and the veggies were so finely chopped, it was hard to distinguish among them. Is Gino’s not considered representative?

You sure it wasn’t Uno’s, also a Chicago deep dish maker who also had an ill-advised franchise operation that spread to California that totally sucked? There was one in San Jose and I ate there exactly once. It was terrible.

Cooking deep dish is SLOW. Anyone trying to increase throughput in the kitchen will be sorely tempted to deliver undercooked soupy glop. I’d expect that from corporate management and uncaring franchisees.

The Skydeck of Willis Tower is worth considering. If you like looking out from 1353’ up.

I think this is kind of a ripoff. It costs anywhere from $28/person to $55/person. Really not worth it IMHO. Go to the John Hancock building and have an overpriced drink instead on the 95th floor. Not quite as tall but much better views and at least you get a drink out of it.

Also IMHO the best pizza in Chicago is a pan pizza and not deep dish (which is what Chicago is known for). Check out Pequod’s Pizza. Just stupidly yummy. Barring that go to Pizzeria Uno or Pizzeria Due for Chicago deep dish done well (my BiL lives and dies for Lou Malnati’s but I have never figured out why). Giordano’s is way over rated. Gino’s is pretty good.

As others have mentioned, the river boat architecture tour is totally worthwhile.

And the city’s museums are world-class. If your daughter wants to go to the planetarium you are on the museum campus and can walk to the Shedd Aquarium (penguin encounter is not cheap but is great) and the Field Museum (natural history…think dinosaurs). The Art Institute is also easily a walk from there and has a great collection. The Museum of Science and Industry is great too (my favorite) but it is a 10 minute cab ride from the other museums.

Brookfield Zoo is fun. In Lincoln Park, by the lake. Small zoo but cool and you have the park/lake nearby to walk around and the Peggy Notebaert Nature Museum is nearby (although it may be closed for COVID…be sure to check).

You sure it wasn’t Uno’s, also a Chicago deep dish maker who also had an ill-advised franchise operation that spread to California that totally sucked? There was one in San Jose and I ate there exactly once. It was terrible.

Nah, it was definitely Gino’s. I googled yesterday, and they still have one SoCal location in Sherman Oaks. I’m not gonna trek to the Valley to confirm that I didn’t like it.

I’ll add, for the wife, the Magnificent Mile (aka Mag Mile) has some great shopping. I think it is better than 5th Avenue in New York or Rodeo Drive in LA.

The nearby neighborhood, River North, is just west of that and has loads and loads of good restaurants (easy walk from the Mag Mile).

Also, renting bikes and riding along the lake is great fun (there are Divvy Bikes all over the city).

Brookfield Zoo is fun. In Lincoln Park, by the lake. Small zoo but cool and you have the park/lake nearby to walk around

Maybe your post got cut off, but to be clear, these are 2 different zoos. Brookfield Zoo in the south end and Lincoln Park Zoo in the north.

Brookfield Zoo in the south

In the western suburbs, actually. It’s four blocks from my house.

Brookfield Zoo is good too but kinda out there on its own.

This. Ordering deep dish in a restaurant means waiting 40-60 minutes for your meal. I’ve done it, but wouldn’t again.