Am I a hard-core lefty, like I tell people?

I’m just going to say that I earnestly believe that simplistic, basic bins are abhorrent. A person should be a creature of nuance. It is possible to be a lefty in some regards, and conservative in others. It is the specifics that matter more than the generalities.

So you’re a fiscal leftist, is what I’d say. The rest is up to you.

Along those lines, my advice would be:

A corollary would be to listen to others’ views and don’t tout your own.

Of course. America is most certainly not 100% capitalist. There are plenty of people who think we should have more capitalism; for instance, the dismantling of Social Security. And others who go even beyond that, who think the government shouldn’t play a part even in setting the basic rules of the free market (i.e., even things like contract enforcement would be privatized).

Capitalism is a spectrum, and the “social democracies” of Europe are really only slightly to the left of “American-style capitalism” once you include the extremes. I doubt that anyone thinks we’re really at the exact optimal point right now. Everyone thinks we could be more equitable by moving in one direction or another.

Love it… I’ll second that!

Well, here’s what the other Kropotkin said about equitable distribution, and he was a communist anarchist, so pretty hard-core:
“The means of production being the collective work of humanity, the product should be the collective property of the race. Individual appropriation is neither just nor serviceable. All belongs to all. All things are for all men, since all men have need of them, since all men have worked in the measure of their strength to produce them, and since it is not possible to evaluate every one’s part in the production of the world’s wealth.
All is for all! If the man and the woman bear their fair share of work, they have a right to their fair share of all that is produced by all, and that share is enough to secure them well-being. No more of such vague formulas as “The Right to work,” or “To each the whole result of his labour.” What we proclaim is The Right to Well-Being: Well-Being for All!”

As for hard-core, we might distinguish between “radical,” that is, whether your critique goes to the root of the problem and suggests the entire system needs jettisoning, and “militant,” that is, the means you might consider to do that. You can be one or both. Either or both might be part of the definition of hard-core.

Answer on the left side of every single question on that test and if that’s actually how you feel about things then I would consider you a totally wishy washy centrist who barely leans left. So, does that help you any to figure out where you stand OP?

Your best fit is…

All the questions were slam dunks, didn’t have to think about it a tiny bit.

OK. I was thinking “equitable” meant “more equally distributed”, and of course not everyone agrees that we should be redistributing income from the rich to the poor. Lots of people argue in favor of free-market economics, but AFAIK none of them are claiming that more capitalism is good because it would reduce income inequality.

But you are defining it more as “fair”, in which case one could argue that capitalism is fair and rich people simply deserve to have more because they are smarter or harder-working or whatever. Do I have it right?

I think of a leftist as someone who wants to dismantle the current system, especially capitalism, and replace it with some form of anarchy, socialism, communism, or some anarcho-syndicalism/communism/socialism/whatever government. If you have left wing ideas that include things like stronger safety mechanisms to help those in need, workers rights, etc., etc. but you don’t actually want to destroy capitalism then I don’t really think of you as a leftist let alone a hard core lefty.

But you are defining it more as “fair”, in which case one could argue that capitalism is fair and rich people simply deserve to have more because they are smarter or harder-working or whatever. Do I have it right?

Someone else might think that only true equality is fair, and that hard work or whatever shouldn’t enter into the calculation. That’s their right, but it’s a definition that’s incompatible with the first type of person, requiring exactly the type of detailed and nuanced discussion that the OP doesn’t seem to like.

I’m fine with destroying the state if it gets us closer to equitable distribution of resources. I’m not sure that’s necessary to achieve my ends, but give me a choice between Bolshevism and Republicanism (or centrism) and I’m there.

Man, I hate tests like that. I scored ‘core conservative’, but just barely. Just to the right of center. But I hated almost every question and didn’t think it came close to capturing the real differences between at least certain types of ‘conservatives’ and others.

Another question asked whether I thought military strength or diplomacy will better protect American interests. I had to choose military strength, but the real answer is that they are inextricably linked. Military strength without diplomacy just gets you hated and loses alloes, while diplomacy wothout military strength isma recipe for having your opponents walk all over you. This is the position Democrats had in the Clinton era and before, but now apparently it’s ‘right wing’

On the social safety net I answered “Poor people have hard lives because government benefits don’t go far enough to help them live decently”. This apparently makes me ‘left’, but the alternative answer was that poor people have it easy because they get something for nothing, which I don’t know that anyone on the right except for knuckledraggers believes. The true ‘conservative’ opinion is that poor people have it hard, but if you make their lives too easy with handouts you create permanent dependency and misery. Much better to correct the conditions that made them poor in the first place. Incentives matter.

I could go on. And in the end, it asks you if you lean Republican or Democrat, which feels like cheating.

I’m fine with destroying the state if it gets us closer to equitable distribution of resources. I’m not sure that’s necessary to achieve my ends, but give me a choice between Bolshevism and Republicanism (or centrism) and I’m there.

That begs the question of what you consider ‘equitable’. Also, on the right there is a general belief that ‘a rising tide lifts all boats’, and that even if the disparity in wealth is increasing, it’s only because the rich are getting richer faster, not that the poor are suffering at the hands of the rich.

Or asked another way, would you say it would be an improvement if impoverishing the rich meant also lowering the living standards of the poor, so long as the rich lost more so that society was more ‘equitable’?

Huh. Doesn’t match my conception at all. To me that’s a radical or far-leftist, i.e. a small subgroup. A leftist to me is just someone who is ideologically firmly left of center on all or almost all issues. But to me for instance it doesn’t necessarily imply rejection of capitalism. Though it certainly does imply a more interventionist approach to it than a libertarian would take.

But these kind of semantics are probably of little use as everyone and their cousin has a different definition. We can roughly nail down certain things - “Obama/Clinton/Biden is a communist!” is an idiotic statement. So to, I’d argue, is “Trump is a fascist*!” But are the terms left-winger and leftist synonymous? Only the phantom knows

Your core principle makes you a lefty. There’s no doubt that a view that there should some redistribution of resources on an equitable (or similar) basis is the core principle of being left since that’s where it all started.

After that it’s all just quibbling around the edges. There is no agreed definition of hard core lefty, so considering it any further is a waste of time. All you end up in is a “yes it is/no it isn’t” debate with people in which none of the participants have any particular authority to say, one way or the other.

I’m not going to name names or mention specific things because it would only develop into a meta-debate. But there are political stances mentioned in this thread that substantially post-date the entire concept of what it is to be left wing. And actually at least one thing mentioned in this thread is considered a considered left wing positions in some countries because it is a stance associated with the politics of those who advocate equitable redistribution of resources, but considered a right wing position in other countries where it is associated with the opposite.

There are also the ‘asshole’ and ‘saint’ sides of the argument, but I don’t think it’s helpful or informative to call those ‘left’ and ‘right’.

Since the OP seems equally at home with collectivist and distributionist and individualist equalization I wouldn’t describe that position as particularly leftist, and since the OP isn’t radical, obdurate and activist, I wouldn’t use the term ‘hardcore’.

But since the only people who are going to care are hardcore leftists and rightists, I don’t have a particular problem with the description. I think most people will understand the meaning to be “I probably disagree with you, but I’m not going to argue politics.”

Here’s a better political value quiz than the Pew one: 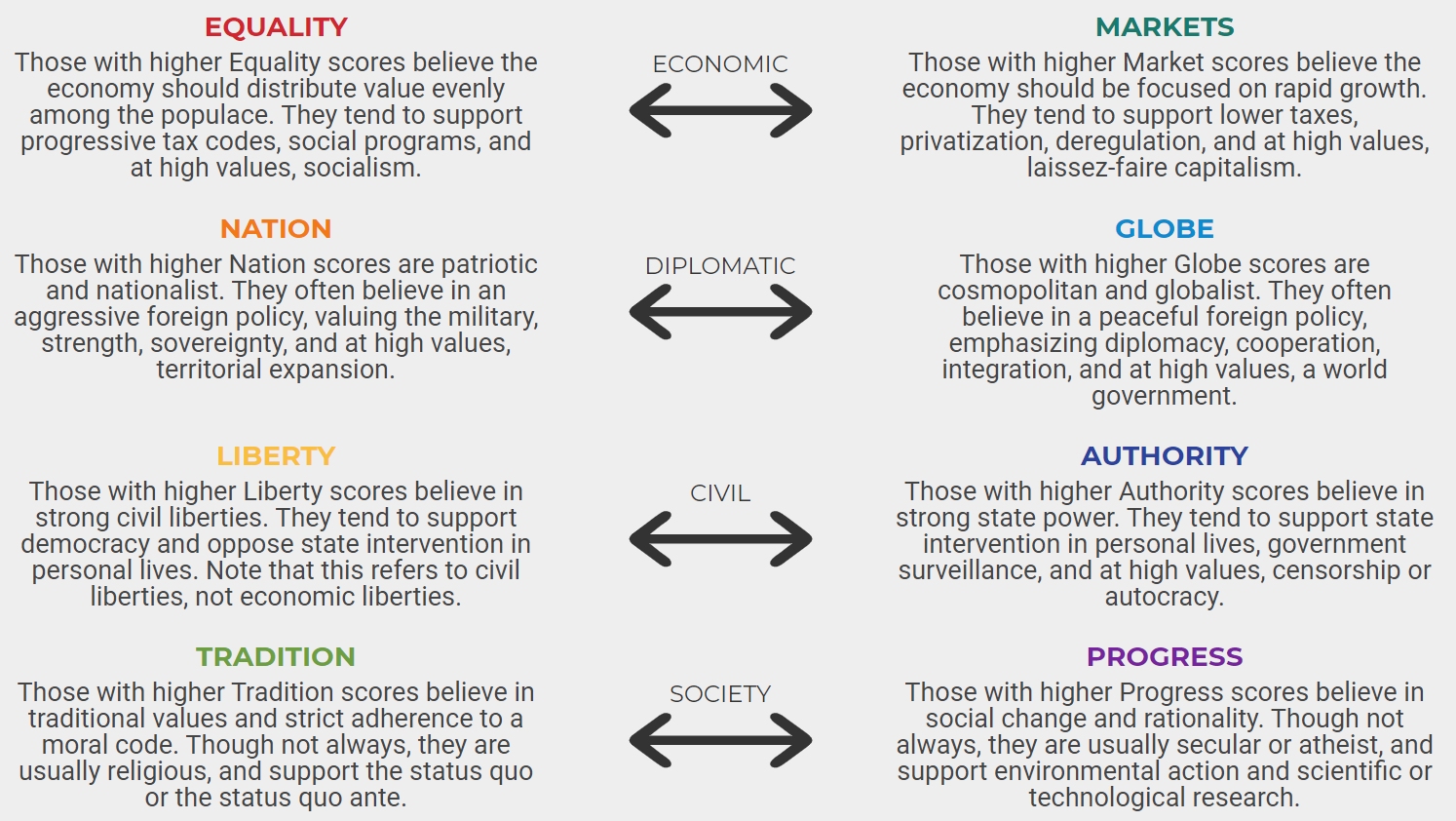 The Pew quiz rates me as a Solid Liberal.

The 8values quiz calls it Libertarian Socialism - which I’m not sure I agree with. 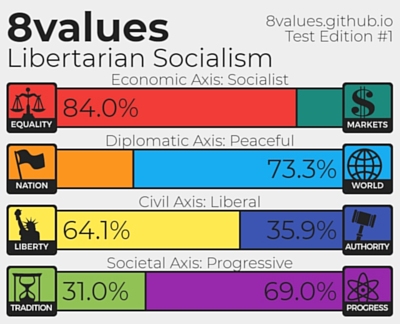