Apropos of nothing: I’m watching the Shawn Michaels/Steve Austin WWF Title match at WrestleMania XIV, in which Mike Tyson fast-counted Michaels and then knocked him out. Did they ever explain why Tyson turned on Michaels?

CHIKARA is now shutting down after Mike Quackenbush has been hit with multiple allegations and much of the roster has quit in protest.

They probably won’t be the only small promotion to go under because of all this.

It was probably a way to have Austin win without Michaels looking like a chump. Plus, it would be “just desserts” for Michaels winning in a fast count over Bret Hart for the world title, even though it was Vince’s call.

Renee Young has covid, and PWInsider is reporting that at least two dozen WWE personnel, including in-ring talent and production, have tested positive.

It’s worth noting that Jon Moxley missed this week’s episode of Dynamite because of a potential covid contact - which, now that we know it was his wife, means he’ll probably be missing his title match at Fyter Fest next week.

Moxley isn’t until Fyter Fest Night 2, July 8, so if he quarantines away from Young, shows no symptoms, and passes the test, he might be available. Probably find out definitively by next episode, at the latest.

According to what I’ve read they were planning to tape both nights of Fyter Fest on Wednesday, so that could be a problem for Mox. Time will tell.

Looks like masks are back in the WWE. I wonder why.

Both WWE and AEW have flaunted social distancing and facial covering safety precautions, with WWE being much more egregious about it (probably prompted by VKM’s admiration of something that thinks the pandemic is just a tactic to keep it from being re-elected coupled with VKM’s own, numerous personality ‘quirks’). On-air talent is being told not to disclose the results of their tests publicly, though it wasn’t made clear if this was after the confirmed cases (Young, Braxton, Pearce, and Noble - all of whom are arguably not ‘talent’ from a very specific definition of the word in regards to wresting) went public with their diagnoses.

I have been a fan of wrestling for nearly 5 decades; I grew up watching WWWF TV on TV long before I knew there was anything other than WWWF. But every year, VKM makes it harder and harder to support something I have enjoyed for so long. I don’t know what proverbial straw will finally break the camel’s back, but that damn camel is carry a greater load than he should right now. I can only hope VKM (and Dunn) removes themselves before I remove myself.

This is both funny and horrifying: PAIGE SEEMINGLY CONFIRMS #SPEAKINGOUT CLAIMS OF ABUSE AGAINST HER FAMILY IN RESURFACED INTERVIEW

Paige said that Daniel Bryan was booked for her family’s wrestling company in 2003. This was a show where he was slated to wrestle three times in a night. Nobody picked Bryan up from the airport so he had to show up on his own. Then Paige admitted that a story which appeared in Daniel Bryan’s autobiography is about her famous family.

“This story is in his book and it’s definitely about my dad and brother. [Bryan] walked into the locker room and he had to find his own way there and he says ‘I just see these two guys and one guy’s holding the other behind the back like this and the other one’s punching him in the stomach like this.’ He says ‘hey guys, I’m Bryan da da da da,’ and my dad says, ‘Oh hey I’m Ricky Knight’ and then he turns and continues punching this guy in the stomach. Then [Bryan] leaves and he comes back and he sees my dad and brother dangling this guy out the window by his feet they were like four stories in the air.”

Later on, people started apologizing to Daniel Bryan and he didn’t understand why they were saying they were sorry. Bryan thought it was because he needed to wrestle three times in a row.

It was finally explained to Daniel Bryan that he witnessed something brutal, and he didn’t realize what it was at the time. The guy being roughed up apparently said something about the Knight Family, so Paige’s dad and brother were giving him a proper beating for it. Paige explained that they are very protective.

I would perversely like to see this animated in WWE Story Time style, especially the part where DBD walks in on the beatdown and absurdly maintains his composure — ‘hey guys, I’m Bryan da da da da,’ and Paige’s dad stops punching the guy long enough to properly introduce himself.

Edge is in a straight-to-VOD movie called “The Money Plane” and apparently it’s a “so bad it’s good” experience. Here’s a hilarious review from Uproxx.

An Important Discussion About ’Money Plane,’ The Summer’s Hidden Gem

It’s been a weird summer for the movies. Luckily, now we have "Money Plane," a low-budget VOD heist movie that stars... Kelsey Grammer?

Hilarious episode of Up Up Down Down — Miz gets yelled at by his wife, Samoa Joe, Cesaro and Adam Cole talk smack, Woods faints from the harsh language, and Prince Pretty gets off some epic gloating. 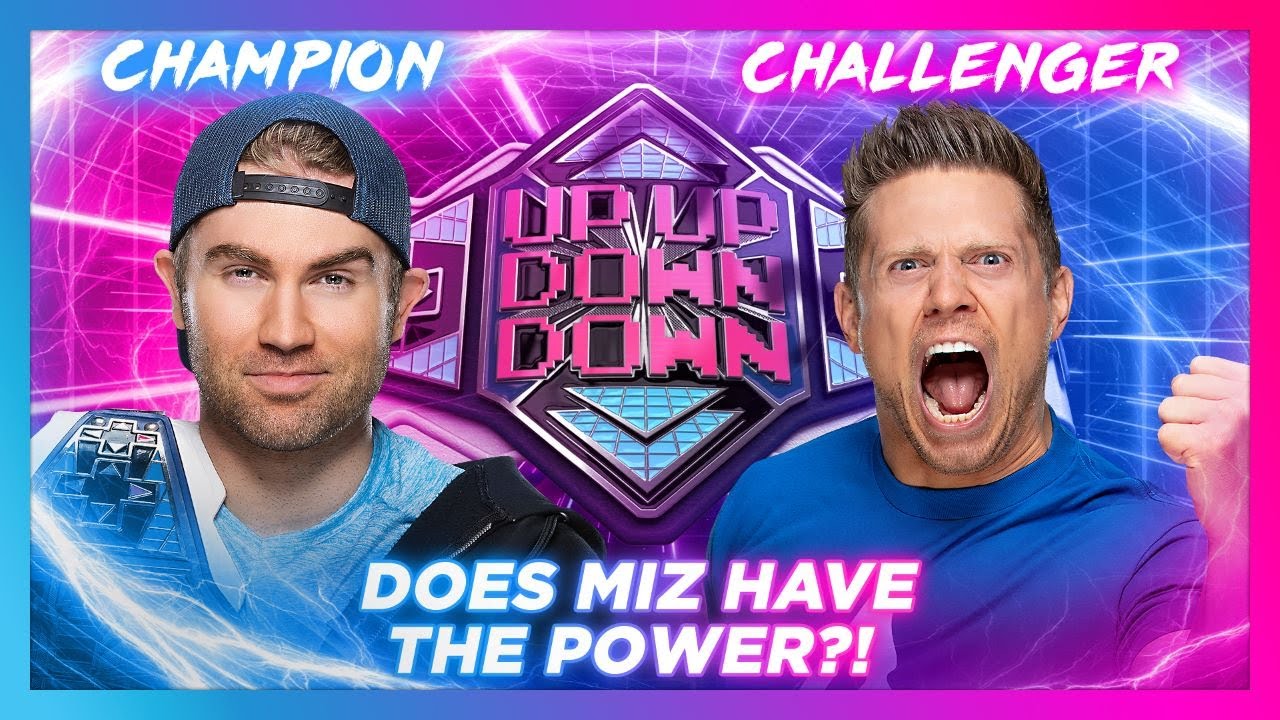 I’m not really in the mood to type a whole thing about yesterday’s Extreme Rules. Overall it was a perfectly fine show with generally bad endings. The women’s match ending was terrible, I’m kinda pissed I didn’t see a horrible-looking rubber eyeball (although the throwing up was a fun touch), Ziggler losing was terrible in every sense of the word and the Swamp Match ended with a meh.

I was not a fan of the throwing up, but at least one dirt sheet has that as a Vince special. The women’s matches were both a schmoz ending, with the Bailey/Nikki working and the Asuka/Sasha not. Ziggs was never going to win, but he always puts on a good show. The tag title match was top-notch and a great finish. Agree on the Swamp Match. The cinematic style that worked with Taker/AJ failed here. I saw what they were trying to achieve, but it never connected with me.

I was going to post a review yesterday, but I realized I could have summed it up in one word: “Meh.”

In retrospect, I would have to say Dolph Ziggler was the VIP. He excelled in his weaselness, but his match finishes are never in doubt. He folds up in a boneless pile and looks at the lights.

In the words of Krusty the Clown, “What the hell was that?!”

Fight Club called. They want their set design back.

WWE is too sanitized and polished to pull this off. They put in dancing girls for that extra oh-so-bad feel, but they were just another trope prop. Lucha Underground did it way better. Shane McMahon is no Dario Cueto.

Later, some guys set off fireworks on a set build. whuuuuut? Was that supposed to threaten the venue somehow? Did they think they could capitalize on the George Floyd riots to get ratings?

Fucking awful. Allegedly VKM was in a shitty mood and everything was running way behind because of it. He’s fucking up the product and then complaining that the wrestlers can’t seem to get over. It really isn’t that hard to put a plan in place, and put in some contingencies for injuries and whatnot. Give the workers time to learn their lines, even if poorly written, so they can give a reasonable reading rather than having to worry about getting yelled at for flubbing. This is just fucking amateur hour with high production values.

For some reason Marty Jennetty was trending on Twitter this morning so I had to see why. Yow.

Update: Jannetty received a ton of attention on social media for this post. He also followed it up by saying that he got "satisfaction" from it. Original:

I was absolutely livid with NXT. IDGAF if you want to make Pat McAfee and Adam Cole (Bay Bay) a thing, that’s fine. But when you spend the entirely of AN ACTUAL WRESTLING MATCH just talking amongst yourself to get the storyline over, I see red. I hate, hate, hate, WWE commentary so much and this was the worst it’s been in forever. What a way to tell the audience “Who gives a shit about the tag champs and UE, just listen to us talk”. What’s even the point? Just do a GD interview segment and call it a day.

Don’t forget McAfee/Cole commentary also overshadowed the Teagan Nox match too. Thought that might make you feel a little better…

if you want to compete with AEW, don’t do this:

DID VINCE WRITE THIS DREK???

Somewhere in Atlanta, Cody strokes the head of Pharaoh and grins at the TV. “Go ahead, keep my last name. I’ll just get it back when the Khans buy you out.”