I guess Dark Order will do an appropriate tribute to him in the next BTE video. It should be weird and tasteless.

In addition to losing Danny Hodge, who was well before my time (and I’m an old-timer),

Very sad about Huber, he was far too young. RIP Jon.

This is the first I heard about Danny Hodge. I watched him wrestle a few times on CWF with Gordon Solie back in the 70s. His boxing background was played up. He would come out wearing a boxer’s robe, towel around his neck, and his hands were usually taped, He wasn’t a big guy, working as a face there, but quickly did a huge turn to a sadistic heel wearing black leather gloves. His name would pop up from time to time in wrestling but it’s probably been 10 years since it’s come up. RIP Danny.

AEW is doing a tribute show to Brodie Lee, and it is kicking ass. Individual wrestlers are relating their personal stories of Lee in pretaped vignettes. Each match includes at least one of the Dark Order members. Lance Archer dressed up in Luke Harper-style wife beater and blue jeans with a kerchief hanging out his back pocket. Everybody’s been using one of Lee’s moves, and Erik Rowan showed up during a match! I marked out big time for that.

Lee’s young son Brodie was at ringside wearing a Dark Order mask. He got to participate in an angle. MJF pulled the mask off his face, and Kid Brodie whacked him with a kendo stick. The kid seemed to be having the time of his life. His dad’s show business family put on a truly heartwarming tribute to him.

Pretty much have to agree with everything you have said.

Jim Cornette answered my question on his podcast! 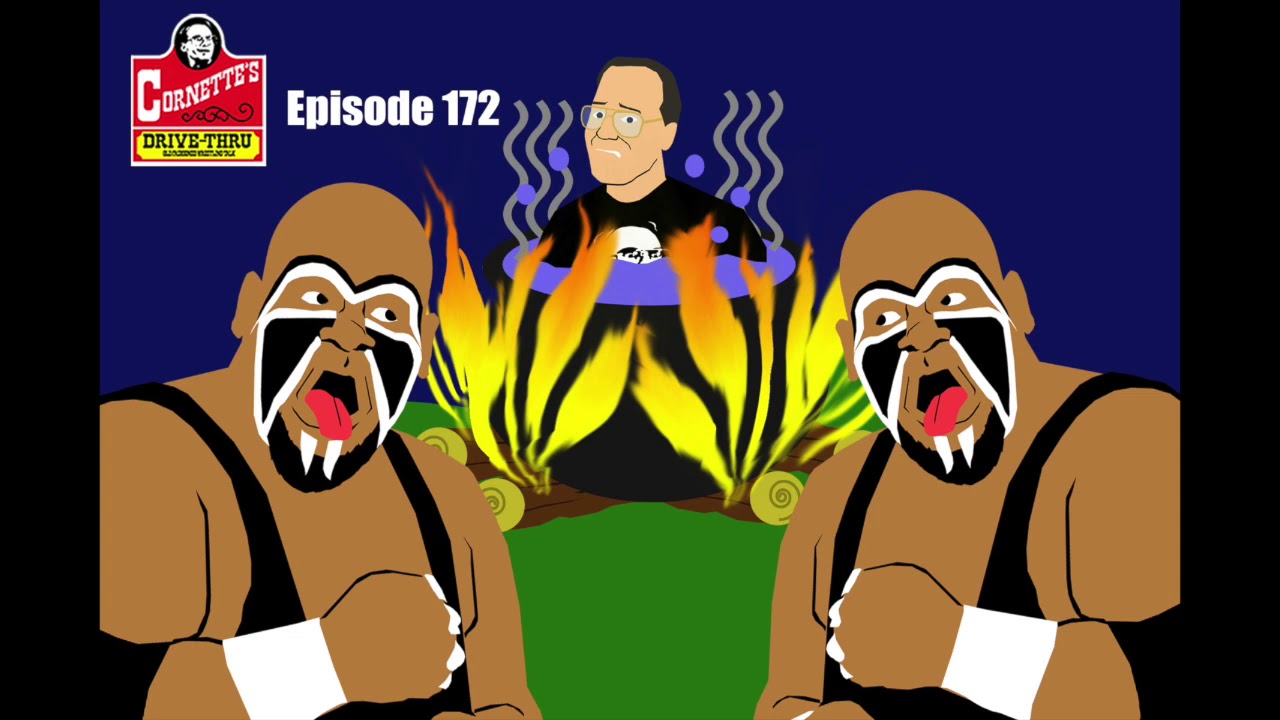 Do you not see the link? Anyway, interesting you ask, because I had a couple of points to clarify anyway.

I asked what went on behind the scenes when Cornette introduced a new tag team to challenge Owen Hart and Davey Boy Smith, and these two twin 400+ pounders came stumbling to the ring. Hart and Smith fought them off with little effort, and then the Headbangers ran in to take their place and get the beatdown meant for them. They appeared in the Royal Rumble that year and were never seen again. It just seemed so random and pointless.

Cohost Brian Last assumed I was a new listener, since he said that question was asked before. I’d actually been listening to the podcast for years via the excerpts on YouTube, so there’s bound to be some content I missed. He also read my question as “You were involved in an interesting angle…” when I actually wrote “You were involved in a clusterfuck of an angle…” Cornette curses frequently on his show, so I don’t see why Last felt he had to clean that part up.

Turns out I was wrong in assuming they were the twin sons of Abdullah the Butcher, but it was a similar situation in that they were being promoted by a booker for a Puerto Rican fed for their ability to do Moonsaults off the top rope, and he was close friends with Gorilla Monsoon. That’s why they got their spot, but apparently it failed to generate interest.

I saw the link, but it has been up for a few days but I hadn’t listened and wasn’t planning to listen.

The first time I saw that team was on a videotape called Stranglemania hosted by the Insane Clown Posse. The ICP dubbed over matches from Japan, renaming the wrestlers along the way (Cactus Jack was called Cactus Sack for copywrite reasons, I assume). All of the matches were pretty brutal and hardcore featuring barbed wire, broken glass, fire, and whatever else. Those two, christened the “Mushroom Brothers” if I remember correctly, had a match against each other and it was bloody for sure. So when I saw them going into the WWF I thought it would be great to see. They seemed like decent workers in the match I saw, they had an interesting look, and they had experience. Then they jobbed and disappeared.

Also, you can find Stranglemania with a quick search - looks like the whole thing is on a well known video hosting site.

It’s Wrestle Kingdom time again! Like last year, it’s going to be a two-night event again, airing live on NJPWWorld - night one is 2 AM Eastern/11 PM Pacific on Sunday night, Night Two at 3 AM Eastern/midnight Pacific on Monday night, with live English commentary.

Since Japan has done a much better job of managing covid than we have, there’s going to be a live audience of 50% capacity (about 20,000) for both nights. There are some newcomers on the undercard this year that I’m not yet familiar with, but it sounds like a good show, and I have a feeling this is gonna be Kota’s year.

Night 2 of Wrestle Kingdom is getting underway, so I’d better tap out my thoughts on Night 1 before it goes live;

Good show, and well worth catching the replay if you care to pick up NJPWWorld (only 999 Yen per month!) I’ll post a recap of Night 2 sometime tomorrow.

Meanwhile, Goldberg is back in ZZZZZZZZ

I hope Drew kicks Goldberg’s ass, but let’s face it, they’re going to turn McIntyre heel; Goldberg will beat him at the Royal Rumble, lose at WrestleMania, and fuck off until January '22.

Lucha Underground might be dead, but Mil Muertes lives on - the character will be debuting in MLW this week.

I haven’t watched any MLW thus far, but this may just get me to check out this week’s show.

Cage is built like the Hulk and can do Lucha moves. On the first tie-up, he picked up Allin and threw him out of the ring onto a ringside table. Dobby (as Taz calls him) got sliced on the table shards and his face became a crimson mask. Allin went on to take more sick bumps, but he refused to be cowed by Cage’s massive advantages and kicked out on 1 frequently. He eventually won the match by outsmarting and outspeeding Cage. Darby may 170 lbs soaking wet, but he’s quicker than a minnow swimming out of a dipper.

The old school fans (well, middle school, the ones who grew up on WCW during the 90s) generally hate him, saying he has 1/3 the talent of Sting. My response was “Maybe, but to this generation of kids, he’s their Sting.”

Can’t say I’ll watch MLW, but the fact that LU isn’t keeping him from using the name and likeness is hopefully a good sign going forward.

And by that I mean I want to see Son of Havoc in AEW.

I watched MLW and give it an -eh-. Mil Muertes fits in better with the dark temple setting of LU. MLW’s environment looked like somebody’s basement. The wrestlers looked like they were afraid the ring would collapse if they stepped too hard.

I did like seeing the new generation of Von Erichs in action, but it wasn’t much action. They jobbed their belts to father and son team La Park. The Elder Park had a massive gut that would have hung down to his knees if not for his belt. They had a crooked referee and a double take place of the Elder Park during the match. It’s like they really wanted to be cutting edge but kept recycling old tired cliché angles in slow motion.

Maybe the Von Erichs are moving to better pastures.