Some other Full Gear tidbits:

Baron Von Raschke was in the front row for the Minneapolis Street Fight, and got to put a claw hold on Ethan Page. I didn’t see the Baron in his AWA heyday. He was midcard and past his prime in NWA, then was phased out when they became WCW. Still, me and my friend Pat would stand up and do the claw hold whenever he came out.

Santana & Ortiz and Jericho all did tributes to Eddie Guerrero, using the Three Amigos move set and the Frog Splash.

Jay Lethal made an appearance and challenged Sammy Guevara for the TNT Title. It looks like he’s reviving the Macho Man gimmick he did in TNA. I’m hoping other RoH talents like Dalton Castle and Danhausen follow, even though the AEW roster is seriously getting too big.

Ex: Minneapolis Minnesota is Meat Man country!
Taz: They love their meats here, in the great state of Minnesota. So John Silver, even though he’s from Long Island, he fits in right here with all these meat lovers, in the state of Minnesota. They love their meat.
Ex: People love meat all over the world.
Taz: Not like here, not like Minnesota my friend. I had Brazilian BBQ here the other day, forget about it. My blood pressure was like 600 over 39.
Ex: I believe you.
Taz: Bottoms number’s low. That’s all that matters. cackles
Ex: Web MD Jones over here.

Yeah. Stable of heels out of that UFC gym are feuding with the Inner Circle.

is it me or is Cornette starting to soften just a bit on aew? I haven’t heard his thoughts on aew because he was having internet problems which are the same problem I have with a certain provider that we share snd I don’t think he covered it on this week’s experience …

Another day, another round of “budget cuts” - John Morrison, Tegan Nox, and the entirety of Hit Row are out among others. The latter is especially baffling - they called them up last month, fired B-Fab the next week, and now they’ve cut the rest of them. I swear they only called them up to extend their non-compete from 30 days to 90 before they dropped them. They’ve now fired 80 wrestlers this year alone on top of the 50-ish they cut last year.

The former Franky Monet is not taking it well.

@FrankyMonetWWE
Stop supporting a company that has ZERO respect for their talent. You love pro wrestling, spend your money on the hundreds of other alternatives. This is wrong. Ethically, as employers they don’t care about us. Talent or fans.
Knowed_Out November 19, 2021, 12:17pm #9676

I watched the beginning of NXT 2.0, the match between Dexter Loomis and Italian Stereotype Guy. Loomis has been in the business for 15 or so years and ISG had been training for a few months under Vince’s factory model. It was a dull, plodding match that resulted in a win for ISG, and I couldn’t take it any more. NXT used to be the hallmark of wrestling programming, and now it’s completely defanged, neutered, and lobotomized. I’ll be one of the reasons its ratings are plummeting.

I know what you’re getting at with this, and I 90% agree, but this also speaks to just how overloaded the WWE roster was and how underused a lot of these people are

I have no desire to, but of the 80 people, I could count the amount of talent I truly think was a loss for the company on my fingers and not even have to go to my toes.

Sir_T-Cups is sadly correct - the roster was overloaded and the talent on there was poorly utilized. There really has to be something going on behind the scenes - perhaps the much-speculated potential sale, perhaps just Vince’s dementia and a bunch of yes-men cashing his paychecks - but the stated directions followed by the actions WWE are taking make no sense at all. It is surprising that such a poorly-run company made it as big as it did and has not just sustained itself but thrived this long.

There really has to be something going on behind the scenes - perhaps the much-speculated potential sale, perhaps just Vince’s dementia and a bunch of yes-men cashing his paychecks - but the stated directions followed by the actions WWE are taking make no sense at all.

Indeed. How much money have they spent training people up for years just to then turn around and fire them due to “budget cuts”? Why sign people like Braun Strowman to a lucrative new contract and then cut them because of “budget cuts” when you’re paying people like Goldberg or Bad Bunny millions of dollars for one-offs? Why call someone up and then cut them the very next week? Why take fan favorites from NXT, call them up, change everything about their character to the point of making them unrecognizable, and then immediately send them to the undercard? Why give Keith Lee, a guy who was popular enough that crowds chanted for him before he even made it to WWE, then give him a ridiculous costume and rename him after a wrestler who died 40 years ago and who most of WWE’s current fans will have never even heard of, let alone seen wrestle? Why let fan favorites like Bryan and Adam Cole (and possibly Gargano, Ciampa, and O’Reilly according to the rumor mill) run out their contracts and sign with the competition rather than paying them what they’re worth and giving them a satisfying spot on the roster?

Vince’s “ONLY I CAN MAKE STARS, HOW DARE YOU LIKE SOMEONE WITHOUT MY APPROVAL, I’LL TELL YOU WHO YOU LIKE” mentality is going unchecked because he’s surrounded himself with people who are unwilling to criticize him, and/or WWE is in a much worse financial state than their filings claim and its record-breaking profits are a lot of hot air being kept aloft by some clever accounting tricks.

If you happened to watch Raw last night (just kidding, nobody actually watches Raw), you may have seen part of this incident where a fan jumped the barricade and speared Seth Rollins before being taken out by security.

Turns out there’s a pretty bizarre backstory to it - the attacker, who has since been arrested, charged, and released, has posted a bunch of private message screenshots from 2019, which can be found on social media. Apparently, he got catfished by a fake Seth Rollins who struck up a friendship with him and then gradually scammed a sum of money out of him with a series of the usual confidence games (E.g. “Becky’s not answering my calls, I need you to send me $300 in gift cards so I can catch a flight to the city Smackdown’s in tonight and talk to her”). The guy eventually figured out he was being scammed after his girlfriend got arrested trying to cash a bad check “Seth” had sent him, but still believed it was the real Seth Rollins who’d ripped him off, had spent the last two years waiting for a chance to get close to Rollins so he could get his revenge, and only realized after he’d committed his special crime and wound up on the Group W Bench that he hadn’t been talking to the real Colby Daniel Lopez. 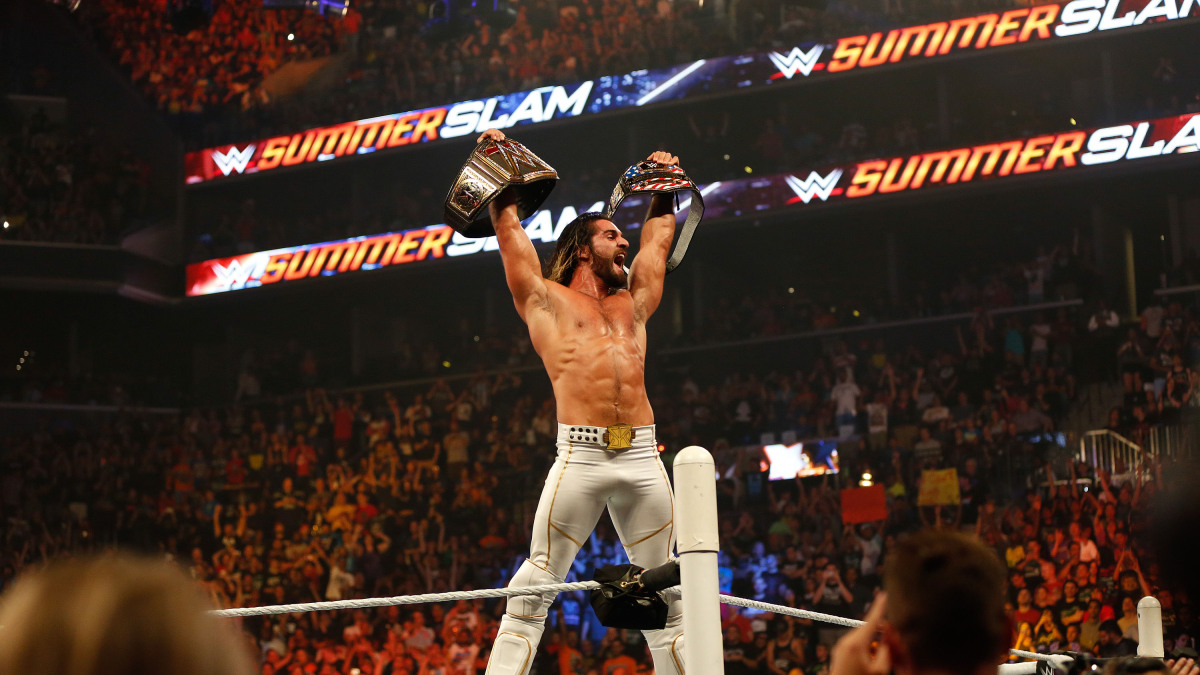 No, Seth Rollins is not asking you to send him money on WhatsApp.

Moral of the story; if you think you’re internet friends with a celebrity, you’re probably not.

This time, it’s not Taz who gaffes.

Taz: Castor’s gotta be aware to keep Team Taz’s name out of his mouth. Otherwise, you’ll get your ass kicked, to be honest.
Ex: Taz, to be honest, Max Castor has to keep a lot of things out of his mouth.
Awkward silence
Taz: Aaaaand side headlock by Castor.
Ex: I meant because he’s a very controversial rapper.

Holy crap that’s insane. I had no idea about the whole catfishing thing. I’ve GOT to tell this to Anna (Kendrick in case you guys want to know) next time I message her. Just need to get some Google Play cards first…

(In all seriousness, that’s seriously messed up. Sure, the dude who was catfished was pretty dumb, but whoever the other guy was really needs to get hit by a car and fast.)

You’re not going to spear her at the next Pitch Perfect debut are you?

So, let me get this straight.

Vince said whoever found out who stole his $100,000 egg would receive a WWE Title match.

Sami Zayn told him it was Austin Theory.

Theory admitted to it.

And Theory gets the title shot, on account of “nobody likes a snitch” and “you remind me a lot of myself” and “it took guts to admit you did that”?

Nice to know that all it requires to get a WWE Title shot is to commit a felony. And he didn’t even win the match. What a stupid, pointless storyline.

Vince said whoever found out who stole his $100,000 egg would receive a WWE Title match.

Actually, it was a $100,000,000 egg, which Vince left unattended and unprotected in his office with an unlocked door and no security cameras.

No wonder he keeps having to make “budget cuts”.

In Vince’s defense, the Cleopatra’s Egg storyline on Survivor Series / Raw was more cohesive than it was in Red Notice.

The promo battle between CM Punk and MJF was so good I must embed it here for posterity: 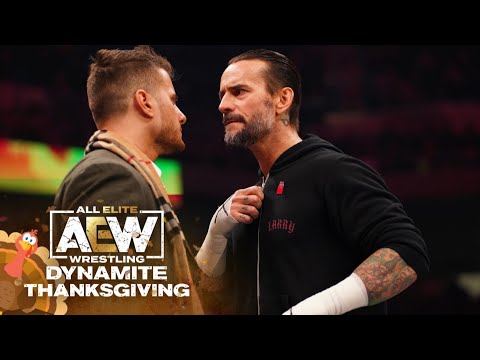