Why did this even go to trial? On what possible basis could anyone have expected an acquittal?? I remember the Twinkie defense, but not the Toenail defense.

Do remember how long it took for them to be charged in the first place? The officials were going to let it slide until there was a public outcry. There are going to be other trials about their actions, too.

Do you remember what he was trying to arrayest people for? IIRC he tried a bunch of Citizen’s Arrayests in that episode, all for trivial diddlecrap. At least Gomer understood that, to make a Citizen’s Arrayest, you have to announce that’s what you’re doing. Apparently the McMs and Bryan didn’t see that episode.

During closing arguments, the lawyers are only allowed to mention facts (or alleged facts) that were brought into evidence, AIUI. (I think it was even mentioned earlier in this thread.)

Was the condition of Arbery’s toenails ever brought into evidence during the trial?

The autopsy report was entered into evidence, I think, because the medical examiner testified that either of the two shotgun blasts would have been fatal.

Apparently it (the video) was released by a Brunswick area attorney named David Alan Tucker. He has never represented any of the defendants and hasn’t revealed how he got hold of the video.

That seems kind of strange. Not sure how a random lawyer would have access to it.

What I think is particularly strange is that Bryant told authorities that he wasn’t familiar with Arbery or the McMichaels but from his porch saw them chasing Arbery and jumped into his truck. WTF?

But in a twist emblematic of the small-town politics that have defined the case, that source turned out to be a criminal defense lawyer in town who had informally consulted with the suspects.

The lawyer, Alan Tucker, said in an interview on Friday that the video had come from the cellphone of a man who had filmed the episode and that he later gave the footage to the radio station. Mr. Tucker’s role was confirmed by Scott Ryfun, who oversees the station’s programming.

Asked why he had leaked the video, Mr. Tucker said he had wanted to dispel rumors that he said had fueled tension in the community. “It wasn’t two men with a Confederate flag in the back of a truck going down the road and shooting a jogger in the back,” Mr. Tucker said.
…
Reports suggest Mr. Tucker had consulted with the McMichael family in some capacity during the investigation, though it is not clear to what extent. Reached by The Washington Post before his arrest on Thursday, Gregory McMichael referred questions to Mr. Tucker.

Mr. Tucker declined to comment on his conversations with the McMichaels on Friday, citing attorney-client privilege.
…
The man, Roddie Bryan, lives in the neighborhood. He had shared the video with the police before sharing it with Mr. Tucker and was cooperating with the authorities, his lawyer, Kevin Gough, said in an interview Friday evening.

“Mr. Bryan has never tried to hide anything from anybody,” Mr. Gough said. “If anybody wanted a copy of the video, he would give it to them.” 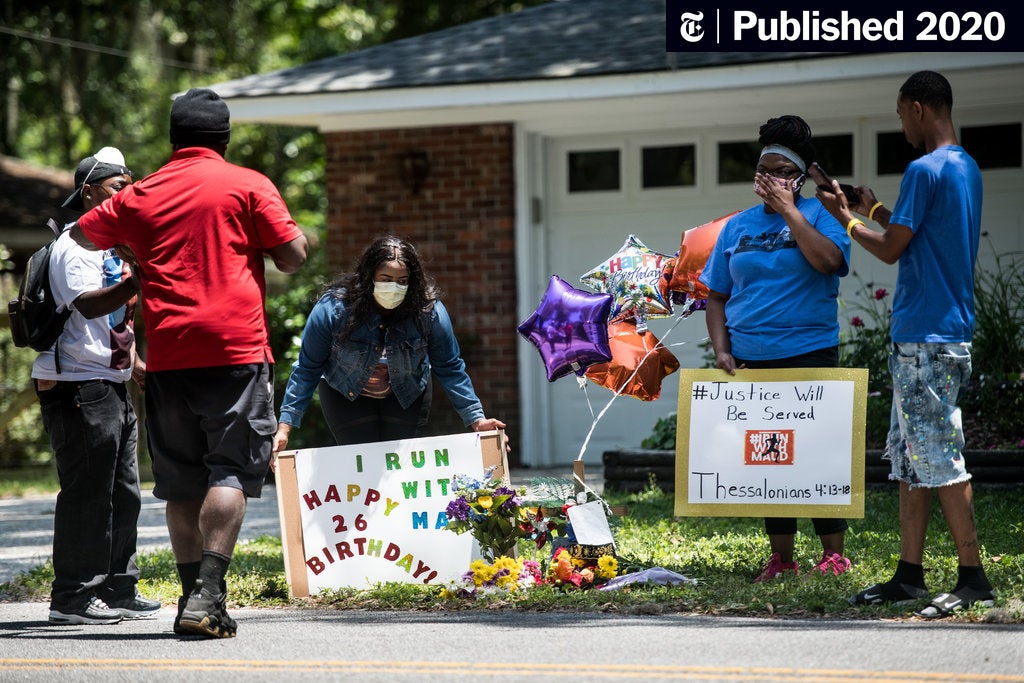 Ahmaud Arbery Video Was Leaked by a Lawyer Who Consulted With Suspects...

The lawyer, Alan Tucker, declined to comment on his conversations with the suspects, citing attorney-client privilege. He later said he would not be representing them.

So it wasn’t two guys in a pickup waving a Confederate flag and shooting a jogger in the back.

It was three guys in two pickups, one with a Confederate licence plate, cornering a jogger with the trucks and then shooting him twice in the chest with a shotgun at pointblank range.

So it wasn’t two guys in a pickup waving a Confederate flag and shooting a jogger in the back.

It was three guys in two pickups, one with a Confederate licence plate, cornering a jogger with the trucks and then shooting him twice with a shotgun at pointblank range.

Exactly right. As MandaJo and others noted they probably really do think they are innocent or at least did and given stubborn human nature probably still do. The fact that they aren’t, not by a long shot, is a hard pill to swallow for a lot of these folks.

oops, I edited my post slightly after Tamerlane quoted the earlier version.

So Bryant would have had to consent to the release of the video? Or it didn’t count as violation of attorney-client privilege if the consultation was “informal”?

Why did this even go to trial? On what possible basis could anyone have expected an acquittal?? I remember the Twinkie defense, but not the Toenail defense.

On the basis of 245 years of American history? you understand it’s surprising that there was a conviction right?

So Bryant would have had to consent to the release of the video? Or it didn’t count as violation of attorney-client privilege if the consultation was “informal”?

No, Tucker was consulted “informally” by the McMichaels. Even though it was informal, that would establish privilege as between Tucker and the McMichaels.

Tucker didn’t consult with Bryant, who was represented by Gough, so no privilege between Tucker and Bryant.

Gough says that Bryan had no problem sharing the video with anyone who asked, including giving it to the police.

If Bryant gave it to Tucker, no privilege issue would arise.

On the basis of 245 years of American history? You understand it’s surprising that there was a conviction right?

Point taken about the history, but I think the U.S. is trickling over the watershed with events like the McMichael-Bryan trial. Society has changed very fast over the past several years … camera phones, social media, awareness of specific issues that were easier to ignore in the recent past, Ferguson, George Floyd, etc. American society is not jogging in place.

I don’t think the McMichaels or Bryan had any real shot of an acquittal … and I don’t think it necessarily required especially fair-minded, non-racist jurors to vote to convict.

It would have taken only one racist to acquit, though. It’s easy to think of this verdict as a foregone conclusion today. A few days ago? Even the defense thought a few days ago that mentioning Arbery’s so called long dirty toenails was important.

No, one dissenter means a hung jury. Convictions and acquittals both have to be unanimous.

OK. My point was that a conviction was in no way a slam dunk.

Oh, I agree. That was apparent from the reaction yesterday from the family and their lawyers. There was a big dose of relief in their comments.

There was, admittedly, no video.

Not nearly comparable, IMHO. Not everything goes like things went in the past in a different case with different specifics.

Just wanted to pipe up for a bit of praise for the lead prosecutor on the case, and for the jury that based their decision on the facts presented and not the dog whistles of the defense.

I was only able to watch bits and pieces of the trial, but everything I saw from Linda Dunikoski was impressive. And the fact that, despite clearly race based striking of potential jurors by defense counsel creating an almost all white jury, she was able to get a conviction was impressive. Kudos.

In other news, the horrible person who tried to cover up this murder, ex-DA Jackie Johnson, was booked by the jail for the charges she’s facing. The verdict clearly emphasizes just how much of a horrible person she is.

I actually think the two cases are quite comparable, and I’m a bit confused about the differing responses.

In the Zimmerman case, like in the Rittenhouse case, we heard so many times, “The only thing that matters is what was going on at the moment the trigger was pulled.” It didn’t matter whether it was smart or prudent or “right” for Zimmerman to get out of his truck and follow Trayvon behind the apartments, we were told. The only thing that mattered was that it was legal for him to do so.

I’m surprised that in this case the focus from the “opposition” was on attacking Ahmad’s character, insinuating that he really was a burglar, etc. Nobody seemed to take the position that it was perfectly legal for the McMichaels to grab their legally acquired guns and jump into their legally acquired truck and legally drive around their neighborhood trying to have a perfectly legal conversation with Arbery.

What, exactly, is the difference then between the Zimmerman case and this one? Was it just they pulled their truck sideways across the road? Legally speaking, that was the felony that fucked them all – it was blocking Ahmad in with their trucks that triggered the “false imprisonment” and created felony murder charges for everyone.

But that seems like such a thin line for their to be any appreciable difference in the response to this case and the Zimmerman case. If we had Zimmerman on video holding his arms out to block the sidewalk, would that have been enough for a false imprisonment charge?