Can we have a dictionary, please? {about sealioning}

Please do.
Urban Dictionary is going on my reference list…

I thought you meant from “guest” to “about sealioning” . . . I are sadderest now…

That would be awesome. Maybe just for a day, OP willing?

It’s named after this comic.

The comic was based on complaints Southern California residents had about sea lions taking over coastal towns. 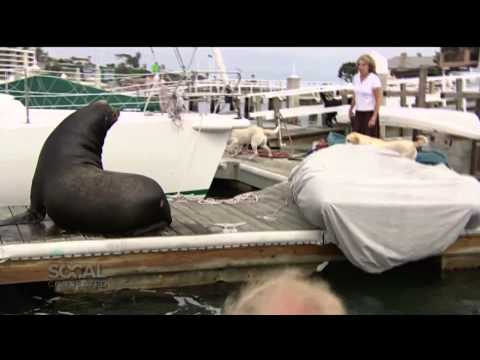 OP, I wouldn’t focus too much on the original comic strip after which the behavior is named - the point it’s trying to make is pretty opaque.

What is Sealioning?: A Type of Trolling | Merriam-Webster

Sealioning refers to the disingenuous action by a commenter of making an ostensible effort to engage in sincere and serious civil debate, usually by asking persistent questions of the other commenter. These questions are phrased in a way that may come off as an effort to learn and engage with the subject at hand, but are really intended to erode the goodwill of the person to whom they are replying, to get them to appear impatient or to lash out, and therefore come off as unreasonable.

And if you’re really interested, there’s a long prior thread here, but in terms of the basic definitions already given here I don’t think it adds much.

I have added the term to the SDMB glossary of terms.

There are a number of terms commonly used on the Straight Dope Message Boards, that are basically “in-jokes” or references. There are several threads listing such, I have tried to compile them all into one post here. If anyone has additions or corrections, please email me – I’m going to keep this locked, so it doesn’t become too long and rambling, but remains fairly focused and easy to use. I have taken these descriptions from various threads and posts by various members. This thread isn’t upda…

For those who may not be aware, there is a link to this glossary in the FAQ section of the Registration Agreement, Rules and FAQ post sticked at the top of this forum.

The Dope is the only place Ive seen the word gormless.

So would you say The Dope is the most gormful place you’ve ever visted?

Here in Oregon, down on the coast, there is a tourist attraction known as the Sea Lion Cave. It’s just that, a huge sea cave that affords a lot of shelter from the weather and the sea lions live there in their multitudes. You pay to go through a turnstile in the gift shop, meander down a scenic paved path and end up ducking through a rock passageway to get to a kind of mezzanine level above the area where the sea lions are going about their sea lion business. You watch them for a while, then you climb back up the path and there you are. Exit through the gift shop, please. Thing is though that once you are hanging above the regular daily life of the sea lion you are struck by two things–the absolutely deafening din of thousands of quarrelsome fat blobs screaming at each other, which they do more or less constantly and also by a nearly physically palpable wave of stench from the thousands of screaming shitting fat blobs below. They’re cute, aside from the humongous bulls, but dayum after a visit to the Sea Lion Cave you have a brand new appreciation for the incredible aptness of the term “sealioning” to describe those who are not arguing in good faith.

{…} the absolutely deafening din of thousands of quarrelsome fat blobs screaming at each other, which they do more or less constantly and also by a nearly physically palpable wave of stench from the thousands of screaming shitting fat blobs below {…}

Pardon me, I couldn’t help but overhear read…
I would like to have a civil conversation about your statement.

Y’know, they brought in a well known animal psychic to decode what the sea lions were screaming and oddly enough that’s EXACTLY what they’re saying. Uncanny!

We had a poster here who shall not be named that was banned several years ago or so. He was well acquainted with the board rules and was an expert at sea-lioning, managing to be both annoying and disruptive while almost always staying on the right side of the rules and always posting with a veneer of affected civility. I believe that the first time the term “sea-lioning” was used here was when an astute mod called him out specifically for this behaviour. It was an inspired judgment call and eventually rid us of a major annoyance.

after a visit to the Sea Lion Cave you have a brand new appreciation for the incredible aptness of the term “sealioning” to describe those who are not arguing in good faith.

On the stench front, you will find the same if you ever visit a penguin colony like the ones in Cape Town.

Yet “penguining” isn’t catching on. I suspect it’s that the tuxedos make them look classier.

OP, I wouldn’t focus too much on the original comic strip after which the behavior is named - the point it’s trying to make is pretty opaque.

Agreed. In the original comic, I always thought the sealion was actually being pretty reasonable at first - the two people are talking shit about him, and instead of justifying their position when called out on it, they refuse to address it as if that gives them the moral high ground.

I mean, obviously the sealion shouldn’t be in their house (but that’s also part of the joke) but it’s hard to see the sealion as unilaterally the bad guy here when the person saying “I don’t like sealions” can’t (or won’t) come up with something as simple as “A sealion bit my sister once” or something as justification for that.

The term the comic spawned ( “Sealioning” to mean "arguing in bad faith while ‘just asking questions’) is quite handy, though.

Although called a sea lion, they are not related to the African lion, Panthera leo!

Well, anything that eats fish for a living is going to have some gross poops happening. I can always tell when the cat food lottery has been heavy on the fish based cans because I’m the one who scoops the litter box. SO nasty!

It is a new one on me too. First time I saw it used was yesterday.

I am old too and behind the times it seems.

I have added the term to the SDMB glossary of terms.

I don’t know what ‘sealioning’ is supposed to be, but in practice the main purpose of such an accusation appears to be to excuse personal attacks on someone you are debating with. Under this framework, attacking the argument rather than the arguer is recast as a bad and sinister move, and cruel personal attacks are justified as the deserved response. Quite impressive that they have managed to turn being polite into a bad thing, but that is a necessity when you can’t win on the merits.

Imagine the sealion in the original comic as a disabled person, and you’ll understand.