In that case there was a visible sign that the structure was actively failing in a potentially catastrophic way. And thus the engineers advised (forced) the residents to evacuate. The city got involved. That situation was clear and steps were taken. As they note, once it was identified it took 3-4 years to correct.

In this case they didn’t have any obviously failing support structures that they saw. Lots of deterioration, but not any clear cracks or breaks. They were in the process of making repairs. It was the engineers duty to assess the safety of the building. Maybe they were negligent in not seeing the imminent risk (remember, we still don’t actually know WHY the building failed yet, just a couple guesses), and if they were it’s their failure for not taking preventative action. The association seems to have responded as you’d hope based on the provided information.

Probably named after the lake rather than the person the lake was named for. A familiar name to most people in the northeast US (i.e., customers).

talking about foreign aid brings international politics into the discussion???

The moderator brought in Politics, not me.

Nothing I said had to do with politics. All of what I said had to do with how the news covers the breaking news story. And mentioning the we give money to Israel is NOT being political as both Political party do it. Maybe the moderators are Jewish and don’t want to allow any discussion that may make Israel look bad? I see nothing wrong with, and don’t threaten me with your " it won’t end well " comment. Go ahead and block me, even better get Israel’s puppet (the US government) to ban me completely from the web like they did to anyone in Iran. Plus if anyone has experience in finding dead kids and grandparents in collapsed building, it would be the Palestinians.

Maybe the moderators are Jewish and don’t want to allow any discussion that may make Israel look bad?

And that will get you a suspension while we review your posting privileges.

I don’t know about other condos but this group was built by a developer who left Canada under interesting circumstances. Champlain Towers South Associates, led by the Canadian property developer Nathan Reiber.

“The developers behind the project had included Nathan Reiber, a Polish-born Canadian who was also once charged with tax evasion and cited for legal misconduct in Canada”

I bet the contractors are thankful they were still giving bids. It saved their workers lives and avoided any finger-pointing that their remedial work triggered the collapse.

Especially since the planned repairs we’ve heard about weren’t structural.

IIRC it took at least 8 years to clear the NY towers. (they were sifting all the rubble for plane parts and remains).

The cleanup of the debris from the Twin Towers took about 8 months, not 8 years.

Thank you for the correction. My memory of the event had distorted the length of time.

And the news should report what floor did the people live on they find the bodies. Like they recovered 10 bodies, well what floor are they from?

That info is being released.
This article lists those identified so far and the apt numbers.

What we know about the victims of the Surfside building collapse

Local police have released the names of all but three of the victims.

Apartments listed are 704, 804, 904, 903, 1002, and 1101. Assuming a logical numbering scheme, sounds like they were close to being right above each other. I wonder if these units were from the part of the building that fell about ten seconds after the center section - possibly in units that were torn open when that first section collapsed? They might have been ejected outwards so that less debris landed on top of them.

I found this layout. I cannot verify it’s accuracy

Eta: it comes from a reddit thread with alot of info. Once again I have not verified any info in that thread!

Parts of Mexico have a lot of experience with this kind of thing, because of earthquakes.

They’re also going to find a lot of pet remains in the rubble, and will need to differentiate those from human remains.

I read a book a while back by a pathologist or anthropologist (can’t remember which) who worked in the coroner’s office, processing specimens. One day, she unzipped a body bag, and started to giggle. Another worker asked her what was so funny, and she replied, “This is a pork chop.” A third worker said, “Last week, the crew lined up and saluted a leg of lamb.”

Their reactions were the only way they could get through a job like that.

There’s an amazing story coming out about a family who lives in apt 111 (which is surely now at the very bottom of the pile) escaping. Apparently, there was a very loud cracking noise and rumbling from beneath their apt and one of them noticed the pool deck starting to cave in and so they ran. Seems there was a 1 to 2 min delay from when the deck started to collapse to the catastrophic failure of the building. Pretty miraculous! 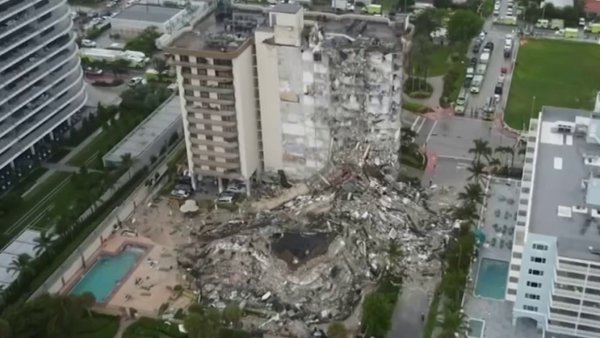 When part of a beachfront condominium building collapsed in Surfside, Gabriel Nir and his family escaped what would have been certain death.

I don’t think many people understand the significance of energy transfer. When you have a large piece of concrete fall it creates a tremendous amount of energy. Force= mass times velocity. Energy is going somewhere. If it becomes focused on a column then it could shatter it or drive it horizontally. There’s no way for someone to know. It could hit a column or wall like a train hitting a car.

I can easily see a water fractured column blown apart or the remaining concrete slabs driven sideways causing a shift in the buildings.