No warm and fuzzies about anything that builder constructed. If I lived there I’d be asking what could be done to reinforce the building.

I would be contacting a realtor.

I would be getting out of the building. Is it currently occupied?

The Developers that build on this property will face a lot of scrutiny. What are they going to do about the high water table that regularly flooded the basement garage?

How will they deal with the soil sinking that the other building experienced?

There should be a lot of oversight before plans are approved.

Is it currently occupied?

Having actually read the linked article (duh): according to that article, apparently so. It says evacuation’s been encouraged but not required and some people are still in there. I can’t find anything else clear on the subject, though, except references to evacuation when the damaged building was taken down that don’t make it clear whether some residents returned afterward. 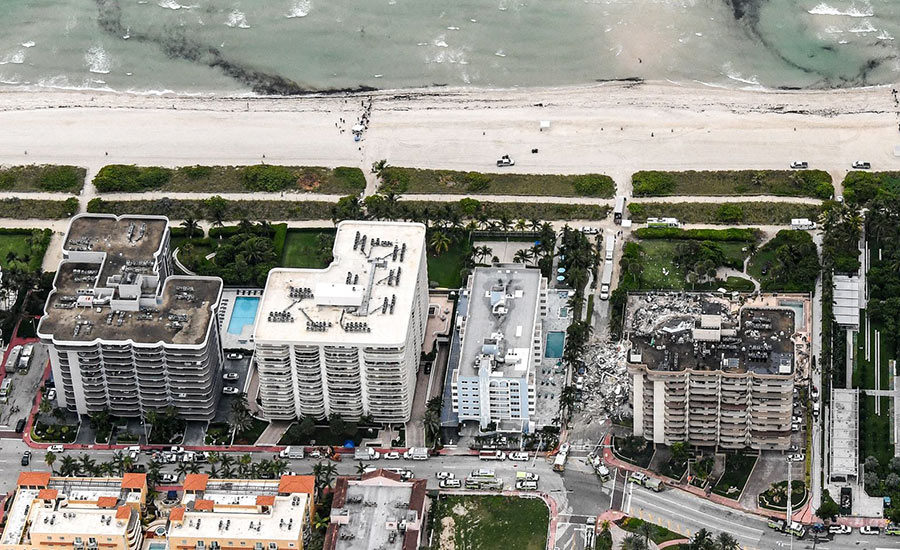 Structural engineer studying the near-twin of the Surfside, Fla., condo that collapsed says there is no indication of the potential for a collapse.

There is good news for the residents of the occupied Champlain Towers North, the 12-story residential condominium in Surfside, Fla., located a short distance up Collins Avenue from its near-twin Champlain Towers South…

“There’s nothing that we’ve seen so far in the north tower that would indicate any potential for a structural collapse,” says Allyn Kilsheimer, founder, president and CEO of KCE Structural Engineers. “Everything I know [so far] about the north building is positive,” he adds.

“We were asked to look at the north building because its occupants had safety concerns,” says Kilsheimer.

Kilsheimer advised owners of Champlain Towers East against any concrete sampling and testing because the building has post-tensioning, which is considered more robust than a flat-plate slab system.

Same designer and same contractor, but one building fell down and the other appears structurally sound.

Inquiring minds (and owners concerned about equity, and insurance companies, and probably a bunch of other people) would like know…

To be clear, I doubt that the owners or even the owners association were asked about the sale: that’s why it had to be approved by a judge. It was railroaded through – by the insurance company, by the government at some level, or by the developer. Probably by all three, and not necessarily that the three parties were actually independent.

There may also be the problem that quite a few residents and people on the condo board died that night. There might be legal issues with even being able to assemble a quorum to vote on issues like sales which required the intervention of a judge. Otherwise it could be years sorting out the legal issues in approving anything to do with the property.

The condo association has been taken into court-ordered receivership. The article also notes that one of the members of the condo board is missing but the remaining members voted to support the receivership.

Same designer and same contractor, but one building fell down and the other appears structurally sound.

possible reason the remaining section survived:
From paywall Washington Post They noted that plans show the surviving structure featured rectangular columns and horizontal concrete beams at the second-story level. It also contained the shear walls around the elevator shaft, the strongest part of the building. The collapsed portion of the building had square columns and lacked the same concrete beams for reinforcement.

Yep, they started with the same “base plan” but several things were done differently once actual construction happened. Then once finished and sold out, each of the three Champlains at some point become independent corporate entities under their respective boards, and not necessarily hire or keep the same management or make the same decisions about maintenance or improvements. In the pre-fall exterior pictures one can see each having had different degrees of renovation (at the least, cosmetically, but suggestive of attention being paid to condition).

If you look at the South building from street view you can look up and see the cement spalling on the balconies.

Does the North towers have similar balcony spalling?

I wonder if there was a difference in the concrete mix used? Or the conditions under which the concrete were poured?

Does the North towers have similar balcony spalling?

In the GStreetview pics as of the date of this post you can see one with visible fresh repair/patch work (i.e. not yet painted over), but otherwise nothing as easy to spot from street level as South (and mind you, those you’d have to be looking for).

From everything I have seen the pool deck collapsed first and likely pulled on and warped the support columns under the building which led to its collapse. I would be surprised if not having the penthouse on would have made a difference.

I think the jury’s still out on that. two witnesses said the building was shaking before the pool deck collapsed. One of them heard sounds described as walls crashing down and later saw the pool deck fall. that person was on the ground floor very near the section that collapsed first. There’s also a video of what appears to be concrete debris in the garage area under that part of the building. It’s very possible the event started under the section that collapsed first.

The people filming the garage entrance said they saw a number of people standing on their balconies wondering what was going on. They were trying to communicate with them but could not get them to understand the seriousness of it.

So the people living there knew something unusual was going on.

You can see from the video of the collapse that the side nearest the pool deck started coming down first and that set-off a chain reaction.

There are five pillars of main interest that supported the building and were also attached to the pool deck support.

It seems most likely that the pool deck came down and yanked on those supports which critically weakened them. The building’s doom was already written but it took some time as it “slowly” (over the course of a few minutes) began to shift which likely caused the collapse we see in the garage.

NOTE: I am no expert. Just distilling things I have read/watched.

But there is a great deal of energy generated from the falling deck so that certainly added to what was going on.

They punched through. It would be hard for the deck to pull the other pillars down if the deck pillars are still standing.

Sure but the pillars were supporting beams that crossed them (like a “T”). When the top part of the T slid down the vertical pillar it pulled on the things connected to it (the pillars supporting the building).

That did not fully yank the supports of the building out but it critically weakened them (hence the time delay from deck and garage collapse to building collapse…only minutes but not immediate).

The developers of Eighty Seven Park, the luxury building next to Champlain Towers South, proposed a payment of $400,000 to the association for the now-collapsed condo in exchange for expanded construction hours, a commitment to never publicly oppose the project or the developer, and an agreement to release the developers from all liability,

The proposal isn’t dated, but according to one of the sources, it was made “about two years ago” at a time when residents were complaining about debris and “shaking” caused by the construction of Eighty Seven Park and raised concerns about its impact on the “structure” of Champlain Towers South.

It’s interesting that the residents thought the shaking was cause for concern.