Both are good questions. Another one: how many people will die from COVID that would have lived if the JJ wasn’t paused? Even if we knew the answers it would still be an ethical quandary.

As far as I can tell, people are going along with it with some grumbling but no question about the necessity of the measures. There do tend to be demos every weekend now, though those started long before the Easter lockdown; the media has been painting these as run and attended mostly by conspiracy theorists, anti-vaxxers, and far-right activists, and from what little I’ve seen of the demos myself, this characterization is probably still largely correct. While there have been occasional skirmishes and arrests at the demos, outside of them people generally seem to be abiding by the rules. For instance, since November I’ve seen someone go maskless on public transport only twice, and never in a shop.

Not so much a breaking news story, more a breaking news/commentary resource: I just came across something called Brief19 - so far as I can tell it hasn’t been posted here before; if it has I apologize. But it looks very useful - here it is:

For example, this brief-and-not-too-technical-summary addresses a current hot topic: 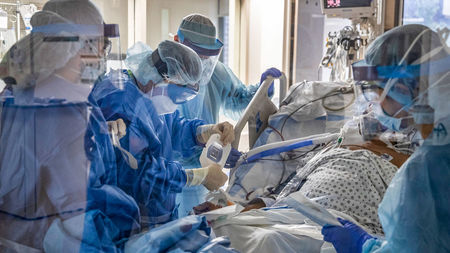 Also... An End To Mask Reuse? CDC And FDA Move Away From Recycling Guidance, As Shortages End · Pfizer Seeks Expansion Of Emergency Use Authorization For Its Vaccine

Not so much a breaking news story, more a breaking news/commentary resource: I just came across something called Brief19 - so far as I can tell it hasn’t been posted here before; if it has I apologize. But it looks very useful - here it is:

Two bits of news, apologies if I missed these being posted before:

I’m increasingly worried about the Indian variant and the possibility of similar variants emerging here. The dominant strain in the US now appears to the the UK strain, which seems to be more potent than the original virus that came from Wuhan but is still controlled by the vaccines. The more recent variants, however, appear to be good at hiding, not only from the vaccines but even from tests that confirm the virus’ presence.

I could be wrong but if I’m interpreting the Israeli data right, it appears that the best vaccines so far (Modern and Pfizer) may only be about 40-50% effective against the SA variant, and I suspect that there are other similar variants out there. It’s not quite the time to take off the mask.

The more recent variants, however, appear to be good at hiding, not only from the vaccines but even from tests that confirm the virus’ presence.

Cite? This is the first I’ve heard of this.

I could be wrong but if I’m interpreting the Israeli data right, it appears that the best vaccines so far (Modern and Pfizer) may only be about 40-50% effective against the SA variant

Are you referring to this study?

Evidence for increased breakthrough rates of SARS-CoV-2 variants of concern...

The SARS-CoV-2 pandemic has been raging for over a year, creating global detrimental impact. The BNT162b2 mRNA vaccine has demonstrated high protection levels, yet apprehension exists that several variants of concerns (VOCs) can surmount the immune...

If so, I’d say you’re interpreting the data extremely pessimistically and giving it too much authority. The number of SA variants (B.1.351) they encountered in fully/partially vaccinated individuals in the study was so small (9 out of 400 if I’m interpreting the data correctly), it should definitely be taken with a grain of salt.

The main caveat of our study was the small sample size of both the WT and B.1.351 variants. These small samples sizes are a product of (a) the dramatic increase in frequency of the B.1.1.7 variant (first detected in Israel in mid-December 2020) (Fig. 1A), and (b) the low frequency of the B.1.351 variant in Israel [14]. In fact, in our latest samples obtained in late February and early March 2021, we noted fixation of the B.1.1.7 variant, but this interpretation requires caution as our sample size was low (Fig. 1A). Furthermore, caution is required from over-interpreting the odds ratios obtained, as the absolute numbers we found, in particular for B.1.351 infections, are very small.

Contrary to click-grabbing headlines, definitively stating the SA variant evades protection or vaccines aren’t effective against it is not justified based on this single, relatively small sample, non-peer reviewed study.

As a counterpoint see this release from Pfizer about a larger study:

In South Africa, where the B.1.351 lineage is prevalent and 800 participants were enrolled, nine cases of COVID-19 were observed, all in the placebo group, indicating vaccine efficacy of 100% (95% CI, [53.5, 100.0]). In an exploratory analysis, the nine strains were sequenced and six of the nine were confirmed to be of the B.1.351 lineage. These data support previous results from immunogenicity studies demonstrating that BNT162b2 induced a robust neutralizing antibody response to the B1.351 variant, and although lower than to the wild-type strain, it does not appear to affect the high observed efficacy against this variant.

Just to be clear, I was hedging a little on the efficacy re: the variants. I also just now read some reports published within the last 12-24 hours indicating that Moderna is doing well against the SA variant, which is indeed good news.

Obviously, the situation is quite fluid at this point. I’m keeping my mask on until I see how the vaccine holds up against other, newer variants.

Here’s the link to the news about the Indian variant. Whether this is a case of just poor testing regime or a stealthy variant, I honestly don’t know.

India News: The novel coronavirus variant that is causing the current wave of Covid-19 is not just highly infectious but also stealthy. City hospitals say they ar

These kinds of posts are why I come back to the Dope. Thanks Trom.

Today was the 2nd largest single-day increase in new cases yet with over 804,000 new cases worldwide.

Not trying to quibble over the numbers, but I wonder how much of the “new cases” increases are due to each of:

There’s no doubt this disease is totally having its way with humanity. But in any large scale distributed reporting scheme there is vast opportunity for noise, and especially noise that changes over time, to largely confound any effort to manage by changes in the signal.

US suicide rates apparently dropped about 6% last year. The attached article has some speculation about why that might be, but increased support during the pandemic is a reasonable guess. (plus see below)
US suicides dropped last year, defying pandemic expectations

I hope you don’t mind. I created another thread on this. This is shocking news to me. I’m interested in learning more about it.

Not trying to quibble over the numbers, but I wonder how much of the “new cases” increases are due to each of:

I can’t speak for the world, but the number of tests in the US has gone down this year, not up. I couldn’t dig up a chart online, so I made one using the Covid Tracking Project data, here. 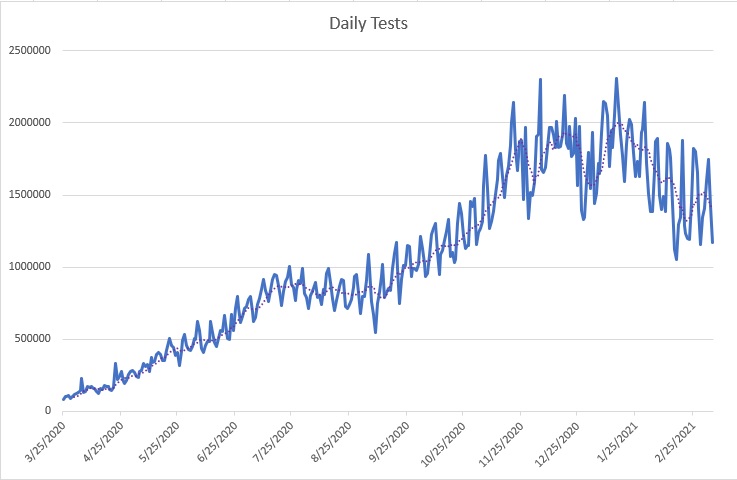 My hunch is that people are more energetic about getting a vaccine than a test, so test demand has fallen.

Also not speaking for the world, but the latest articles I’ve read about India are about them running low on oxygen due to the number of people severely ill with covid. So I’m pretty sure things have gotten worse there recently.

(Also, they’ve stopped exporting vaccine, wanting to use it at home. Which is kind of a world crisis, since India is the world’s largest producer of vaccines.)

“So far, about 5,800 breakthrough cases have been reported to CDC. To date, no unexpected patterns have been identified in case demographics or vaccine characteristics,” the CDC told CNN via email.

Nonetheless, the total represents a very small percentage of those who have been vaccinated.

29% of the 5,800 cases were asymptomatic. 7% required hospitalization. Because of the lag, it’s hard to know what the correct denominator is for the cases vs vaccinated.

About 5,800 people out of tens of millions who have been vaccinated against coronavirus have become infected anyway, the CDC tells CNN.

The Johns Hopkins Coronavirus Map shows the reported daily case numbers about equal to the record high level of last December, and appear poised to continue going up.

The Daily Report Cases in India are shooting up at an incredible rate. Mot only are their levels the highest of any country (almost three times the number in the US, long the world leader in this category), they are on track to exceed the record levels set by the United States in January. Daily Case rates are skyrocketing in Colombia, Argentina, and Germany, as well.

By contrast, the US rates, although up from March, are not increasing rapidly and may even be levelling.
Among individual states and territories, Michigan’s daily reported cases (seven day average) hit a new record high yesterday, April 15. Puerto Rico set a new record high on April 12, which I had missed. Vermont’s rate has gone down since it hit a new record two weeks ago. Maine’s daily case numbers are skyrocketing upwards, buit not yet as high as their January 12 record high. Other states, while some have increasing numbers of daily cases, are not as high or rising rapidly.

I hope it stats that way, but a lot of them have recently opened up venues. New Hampshire just repealed the statewide mask mandate yesterday, which I hope won’t make their cases rise.