Yup, probably have to try a few times. But you’ll find one eventually.

I don’t know how common it was, but lodestone was known in Europe in the 12th century. Vikings were making compasses out of it by the 10th century or so. All throughout Europe, lodestone’s attraction to iron had been noticed, though nobody really understood much about magnetism back then.

There’s a point to be made that the Chinese were making compasses out of it a thousand years before that, but lodestone was around. Even the ancient Greeks knew what it was well into the BC centuries. The ancient Greeks thought that lodestone’s attraction to iron was caused by lodestone actually containing a soul. Europeans in the 12th century wouldn’t have had much of an understanding of magnetism, but lodestone wasn’t a complete unknown to them.

It probably wasn’t sitting around on the shelf of ye olde general store, but if you ask around for that strange rock that is attracted to iron, someone is going to know what you are talking about and will point you to a hunk of it.

Well a long thin piece of metal is a wire. You don’t need any width. What you are basically describing is a dipole antenna. And yes, they are directional. In a perfect world they have a null end on. In an imperfect world they still receive a lot worse end on.

A Yagi is basically an extension of a dipole with additional elements that increase directionality. They have the advantage that they have unidirectional gain, so there isn’t a question of which of two opposite directions the source lies in. They could be trivially made with sticks and wire. The entire contraption could be suspended from a pole to allow it to be swung around. The longest element would only be about 5 metres, aka 16 feet. A multi element yagi of useful directionality could be made easily enough to be portable and set up as needed.

Making a magnet is another thing that given enough time (I’m going say the enterprise to make the whole receiver could be a year or so’s project.) You need some steel. Steel was known in the 12th century. You also need a coil of wire, and lastly a way of sending a large current through the wire. I’ll go out on a limb here, but construction of a suitable static electricity machine may provide a suitable enough peak current to get you a passable magnet. You will need to play with the steel, heat treating it to a significant hardness. Then it will retain magnetism. Wind a coil around it, and finally run as large a current through the wire as you can. Modern magnets are made by using a capacitive discharge into a field coil. The trouble with a static electricity machine is that the circuit may resonate, which would be a very effective way of making a demagnetiser. So a nice pile of home built chemical batteries may be the next best thing. Copper and zinc and sulphuric acid - aka a Daniel Cell, is again within 12th century capabilities. Then the possibilities become much wider.

I’m currently on my phone. So I will just say I love this thread and y’all

You also need a coil of wire, and lastly a way of sending a large current through the wire.

I’ve always wondered if multiple magnets could be used to increase the strength of a single magnet. Suppose you made a bunch of beaten magnets like that. If you made two bundles of these magnets and oriented a piece of steel or iron between them, would that create a new magnet that is weaker or stronger? Do you ever get anywhere or do you just end up making weak magnets?

But it’s in Medieval England, a temperate zone. How are coconuts getting there? Are you suggesting coconuts migrate?

Are you suggesting coconuts migrate?

Regarding building the piezoelectric earpiece for your crystal radio receiver:

If you could get your hands on a piezoelectric crystal (like a small, thin piece of quartz), would you actually need to turn it into an earphone? I’d think it’d be kind of tough to attach the crystal to a diaphragm, and then enclose that diaphragm in a tiny chamber shaped to go into your ear. Could you tell if you were/weren’t getting a signal by just putting your finger against the piezoelectric crystal and FEELING its vibrations?

Or are the vibrations going to be too weak for a normal finger to be able to feel them?

(EDIT: Experimentally, when I put my finger on a speaker, I can feel bass notes but not high treble notes. The signal would have to have components to its waveform that were slow enough that you could feel them as vibrations, which is a much lower “highest pitch” threshold than the human ear has.)

Plus you have to avoid being burned as a witch…

Supposing two swallows carried it together?

My understanding is that it’s a short three hour tour for coconuts.

Oh, and something else to keep in mind:

(And actual solder, for that matter.)

Solder is just lead and a soldering iron is a hunk of metal heated in a fire.

I thought lead wasn’t conductive enough on its own, and you had to add other stuff like tin or zinc to make it work right. Maybe you could use pewter?

Commercial solder used to be 60 percent tin and 40 percent lead. Tin has been around since the bronze age and lead has been around longer than that. Ancient Romans confused the two for some reason and called tin “bright lead” and called lead “dark lead”.

Not that it matters. The first radio that I built didn’t use solder. You can twist the metal connections together. I used a diode instead of a razor blade (because 8 year old kids shouldn’t be playing with razor blades) and the magnet was a commercial round magnet, No solder required.

I wouldn’t say that it worked well, but it worked. The “speaker” was just wire wrapped around the magnet. It was very difficult to hear. Adding a paper cone to the wire probably would have helped tremendously.

Lead is not great but will do the job. If tin is available it would be help a lot. Adding silver would greatly increase electrical conductivity but would also increase melting temperature. A little antimony would help also. But the job can be done with just lead, the conductive surface should be a very thin layer of lead. Any acidic substance could be used as a flux but assuming copper conductors scrubbing down to bare metal should be sufficient by itself. Any kind of flux used might contribute more to corrosion over time.

And as @engineer_comp_geek points out, solder is hardly necessary.

How do you think stained glass windows were made?
How do you think all that lead pipe that drove the Romans crazy was joined?
Hell, the ancient Greeks had soldering irons, based on the kind of solder joints they made. 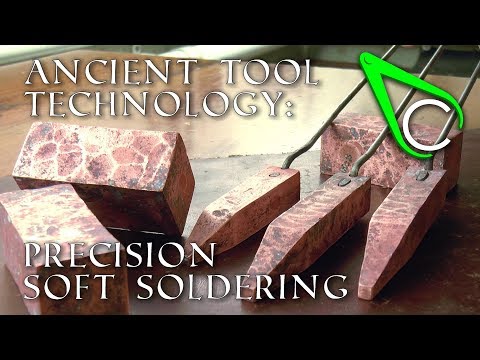