In the US, not the UK, but I’ve always thought it was cool that theoretically I could grab a group of my friends and end up playing the Champions League winner in a competitive match because of how domestic cup tournaments are run.

This seems the right thread to bump. So Manchester United fans managed to postpone the game today with Liverpool by breaking into the stadium and causing various issues inside and outside. I’m a little surprised (but not very surprised) that the game is only postponed and not a forfeit.

It’s an interesting situation. I wonder if there’s anything in English law preventing Parliament from establishing club ownership rules similar to Germany’s?

The only one that springs to mind is when directors of companies are prosecuted or have some close to the line financial dealings that then disqualifies them from directorship.

Those directors can have several company interests and being disqualified as being ‘not a fit and proper person to be a company director’ would mean they have to divest themselves of all controlling stakes in their other companies.

This was a strategy that was attempted during the bitter dispute over control of Harrods where Mohammed Al Fayed had been claimed to have used money that was not directly his to buy the store - which goes against the rules on true company transparency ownership - however that campaign completely failed.

I am not aware of anything that the Glazers have done that might even hint at such an outcome.

As for the protest - that will be a Premier League matter - it amounts to trespassing, which is a civil matter, there are possible criminal charges but this is fraught with unlikelytudiness.

Man United fans have a reputation of being glory chasers and only support Man U because of their success and have no other ties, such as being local and with that in mind I’m surprised they even know where Manchester is - must have found out from google maps.

I have to call a little hypocrisy on the Man U supporters. One of them was interviewed after the break saying “its all bout the money, isn’t it?”

You cannot tell me he wasn’t saying that when Manchester United when they signed Paul Pogba, Anthony Martial or Harry Maguire for record setting fees.

I get what they are protesting, but you can’t protest your team to the point of riot for trying to make more money when you were celebrating when they spent it to make the club better.

Manchester U quit the Super League so the fans got their way. Now I wonder how much of this protest is about that or how much it is about the “heritage” of the owners . . . . . . .

They’re American (a huge no-no in British sporting circles) and they run the club as a profitable business rather than as a vanity project. Meanwhile Man U haven’t won the title since Alex Ferguson retired, while City - backed by Sheikh Mansour’s billions - have won it three times.

When supporters chant against “greed”, at least half what they’re complaining about is the owners spending too little trying to buy success in the transfer market. They’re happy to stump up for season tickets so that players’ agents can trouser millions on eight-digit transfer fees, just don’t try to make a profit out of our club! No-one’s demonstrating in support of a salary-cap/parity system that would make clubs like Leicester, West Ham, Everton or Leeds competitive with the Big Six when it comes to signing top players.

In other news, Bayern Munich have wrapped up their ninth consecutive Bundesliga title and are tipped by the pundits to go on dominating for years to come. Whatever the German model delivers, it isn’t parity.

I think the larger issue with the Glazers is that they’ve spent a vast amount of the club’s revenue to service the debt they created to buy the club in the first place.

As always with these things, the story of football money making is more nuanced - it’s true that the Man U saddled the club with massive debt, and whilst the Glazers have changed the club into a world brand that makes more money, I would not be surprised to find they also make much more money themselves in various deals that use the Man U brand but at arms length so that it does not have to be reported in club accounts.

However, as @Merrick has pointed out - why shouldn’t club owners make money? Why should clubs be run at a loss? and why should success depend upon being able to pay out more money than other clubs where football passion is every bit as strong?

BBC has an article 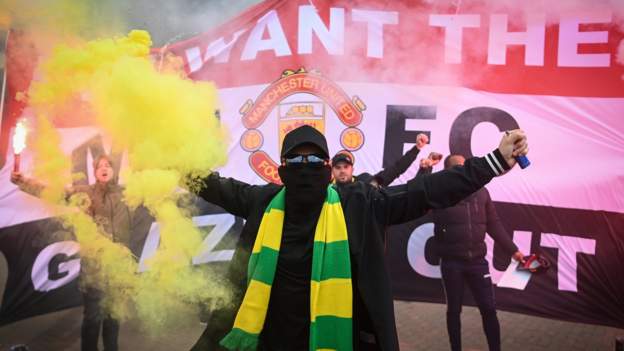 'Emotions have been simmering for 16 years'

You can argue it either way, but football clubs in England especially are often community hubs and part of an area’s identity. Granted, some Premier League clubs have moved away from that (but not totally) and fans feel they are the real soul of each club and so there will always be a friction between them and owners who see the club as a business opportunity. Most clubs are still not run like this - many of the wealthy owners are also fans who want the club to achieve on-field success for the sake of footballing glory.

No football fan wants an owner to be taking money out of their club, especially if they are siphoning it off into a very large foreign bank account which doesn’t do anything to help the local community or the local economy.

Why would anyone want American owners with no passion for the club conducting a hostile takeover and then using it as a means of enriching themselves further? Fuck that. I’d be more than happy if the British government outlawed this sort of thing. Ultimately everyone would benefit from such a law - except for the rich billionaire, and who gives a shit about them?

United fans are angry because the Glazers aren’t spending ALL of the club revenues on players and facilities. If they did, the reasoning goes, the club would assume its place at the top of the global footy pyramid, which the fans believe they deserve because of the breadth and depth of their support.

The casual acceptance by US fans that clubs are businesses and the owners entitled to a fair return on their investments is not generally shared across the pond.

It appears that UEFA are considering Champions League bans on the clubs who have yet to renounce the European Super League.

That amounts to Barca, Real, and Juve.

Sky News reported this morning that such a ban could be devastating to those clubs since they rely so heavily on Champions League cash and could result in them not being able to sign players who would want to play in the top Euro competitions - along with the inferred hint that players who took part in non-UEFA sanctioned events could also be banned from international competition.

Barca in particular, but also Real both need to do a certain amount of rebuilding of their teams due to the ageing of their top players, and if they cannot rebuild pretty swiftly then they may find themselves in a position where the top players are already committed to other teams that can offer the top competitive football, which in turn might lead to longer term decline for the three named clubs.

Not easy to find reliable credible links and nothing seems to be decided, 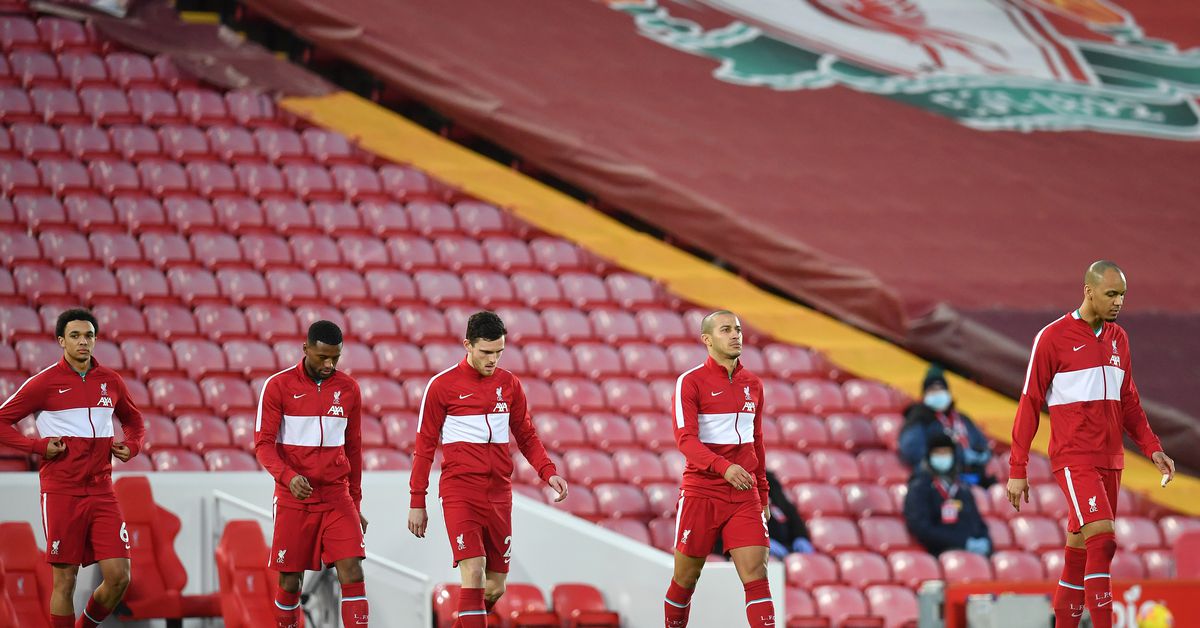 Most clubs are still not run like this - many of the wealthy owners are also fans who want the club to achieve on-field success for the sake of footballing glory.

You mean like the owners of Real Madrid, Barcelona, Juventus, Chelsea, etc? Teams that were also more than happy with the idea of an ESL?

Not to mention that American owners “with no passion for the club” has worked out really well for Liverpool.

Nothing’s black and white. And you’ve named a fraction of 1% of the professional clubs in Europe there. I don’t have a problem with American owners per se. But I don’t have to like and accept what are essentially venture capitalists buying up football clubs - even if some of their clubs achieve success.

I don’t have a problem with American owners per se.

It appears a lot of people do, however, and are blaming this on Americans for getting involved. As if Abramovich or Abu Dhabi or Dubai or Srivaddhanaprabha (Sr. and Jr.) aren’t basically the same venture capitalists. And the Agnellis and Perez are in it to make money just as much as any American owner.

The cat’s been out of the bag for a long while and the big clubs being these community clubs is long past it’s date. The owners of this mega clubs are thinking just as much of the Asian market as they are of Manchester or London or PSG or Barcelona or Madrid or Turin.

Villareal just eliminated Arsenal in the Euro League semi-final. That’s a small club from a town of 50,000 souls. I post this here and not in the omnibus football thread because it exemplifies how underdogs still stand a chance in the UEFA formats as they are currently organized. And that’s a good thing which would never happen in a “Super League” that only consists of the big fish.

I suspect a big factor is that soccer, and all it’s 1-0 scores, is simply a game that’s highly dependent on chance. It’s not parity, it’s randomness. Critics would not call that necessarily a good thing.

That is utterly absurd.

It’s up to you to demonstrate your theory that football is random. Funnily enough I’m not seeing random sides winning trophies too much. It’s an evidently ridiculous claim, but feel free to show me why I’m wrong.

If the World Cup is supposed to be soccer’s ultimate comparison of team skills, why do games keep coming down to “measurement errors,” or luck?

It’s pretty much well established fact, but feel free to continue being provincial about it.