I read in the news a couple months ago about a case of a teacher who removed her mask to read to the kids in her classroom and ended up infecting most of the students in the classroom with Covid. I came across the actual CDC study which is here Outbreak Associated with SARS-CoV-2 B.1.617.2 (Delta) Variant in an Elementary School — Marin County, California, May–June 2021 | MMWR

There are couple things that don’t make sense in this case. In the link it shows a diagram of where the teacher was, where the students were, and which students became infected. It also shows that they had windows open on both sides of the classroom and the door open and had an air purifier at the front of the room. It does not say if the air purifier was a hepa air purifier or not. It also said at some point the teacher developed a cough but it does not say if she was coughing when she was teaching or if you develop after she left the school after testing positive. This is significant also because it determines how much aerosol she is generating as coughing can generate significant aerosol. It also appears to show in the diagram that the desks are 6 feet apart from each other, which I find hard to believe unless the room is huge. When I was in school the rooms were not large enough to have desks 6 feet apart.

Everything I’ve read before about preventing aerosol spread of Covid says that things such as opening windows and using air purifiers are very effective at stopping the spread. In fact the CDC recommends opening windows during large indoor gatherings of people to reduce spread. Having windows open on both sides of the classroom would’ve caused a cross breeze and should have blown any aerosol out of the room quickly.

This is an article written by a Doctor who talks about Covid aerosol spread and prevention. 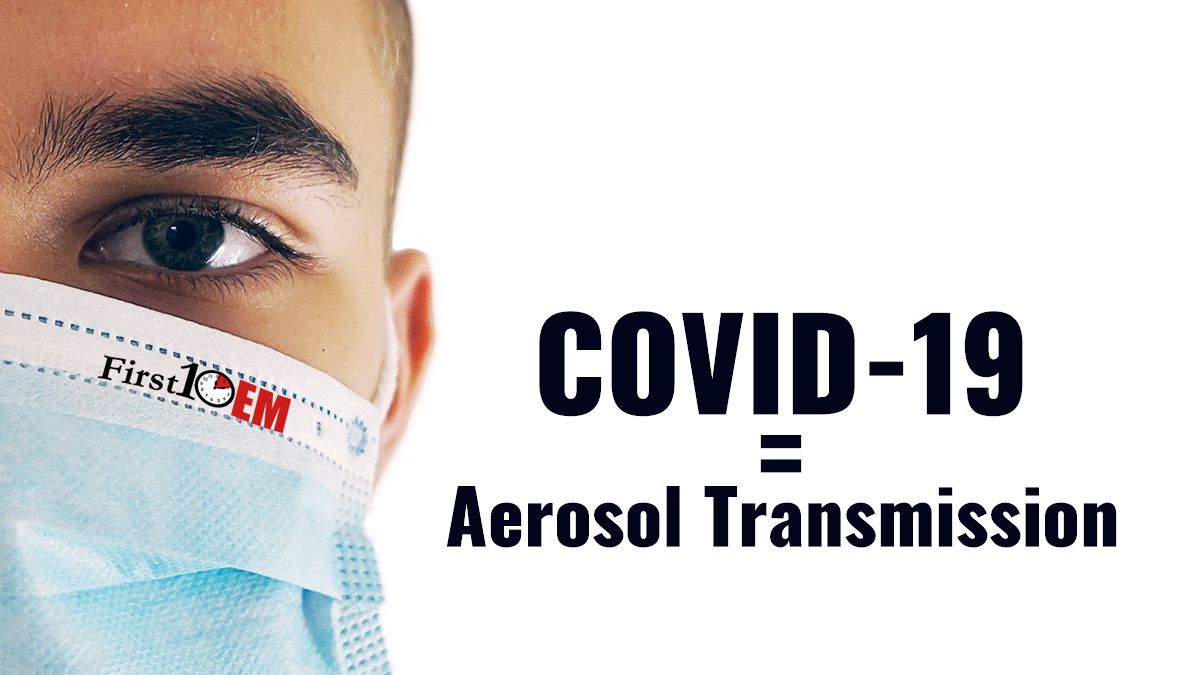 COVID-19 is spread by aerosols: an evidence review - First10EM

COVID-19 is spread by aerosols - a review of the available science.

It is very interesting and in it he says things such as opening windows and using air purifiers are effective at reducing spread and also says that spread through aerosol at distances greater than 6 feet is rare because the aerosol becomes more diluted with distance and you have to inhale a sufficient viral dose in order to become infected. He compares it to cigarette smoke and how it smells much stronger the closer you are to the smoker.

It should be noted that the article on preventing aerosol spread was written before the Delta variant became dominant in the US, and the CDC article show that the strain that caused that infection in the school was the Delta variant. Although the Delta variant is more infectious I don’t think it would make things like air purifiers and opening multiple windows ineffective. The UK strain was also significantly more infectious than the original strain and things like opening windows and using air purifiers were still effective against it. Opening windows and using air purifiers removes particles from the air which are containing the virus, these particles are certain sizes and are removed no matter what the germ or particle is in the air. I wonder if this is a case of mistakes similar to what happened in the New Zealand quarantine hotel case, where a person who was leaving quarantine became infected as they were leaving and they said he became infected through touching an elevator button. It was only much later that they discovered that it was not through touching an elevator button but rather it was due to them testing people in a shared hallway one after the other and he became infected that way.

This is a video that was made at the beginning of the pandemic by Japanese scientists showing aerosol droplets in the air, how long they linger and that opening a window immediately caused the particles to disappear. The link to that is here DIRTY MONEY on Vimeo

Covid is spread primarily through two ways, the first is large droplet spread which is the most common form of spread and is caused by someone speaking, coughing or sneezing and large droplets of saliva will hit people nearby at various distances. It is my understanding that just speaking can cause saliva to travel 6 feet, coughing can travel about 10 feet and sneezing can travel up to 30 feet. Coughs and sneezes also generate aerosol known as small droplets. Small droplets through aerosol is the second way it can spread.

I wonder if in this case the teacher actually had her mask off for much longer than just reading was going up to students and speaking to them hitting them with large particles or if she had the windows closed some of the times or had the air purifier turned off or if it was not a HEPA air purifier. Perhaps she was afraid of getting in trouble for not following policy and claimed all the windows were open all the time and she only removed her mask to read. I also wonder if she got the students that were close to her sick from large droplet spread when she removed her mask and they in turn infected the other classmates through lunch or some other shared activity where they remove their masks and are close to each other. It does not say where they eat their lunch, but that is significant. I am not familiar with Covid restrictions on students for lunch. Do most students that age group eat their lunch in their classroom or in a large shared lunch room?

I would like to know this for a couple reasons. Number one I am curious about it, number two I am due for a dentist appointment. Obviously you can’t wear a mask in the dentist. My dentist does use HEPA air purifiers and I went to the dentist in February and I did not get sick. Although that was before the Delta strain became dominant.
Patients are worked on in separate rooms although the rooms do not have doors and are connected to a shared hallway. This study obviously has significance on the safety of going to the dentist and other activities.

I don’t want to post the same link in a bunch of places, but the link in the below post talks about some of the misconceptions that have been around for a while. Things such as the 5 micron aerosol size and the 6 feet distancing number.

For those who care about the actual science behind the decisions and aren’t just trying to score silly political points (in other words, not Magiver), you might find this article pretty interesting. It’s about the early days and the thought process behind washing your hands versus wearing a mask, etc. It goes into detail about where things like the idea that 6 feet of distancing is ideal (wrong) and that droplets have to be 5 micron to be airborne (also wrong) came from in the first place and wh…

A few things to consider:

My take? Given the information, the result was pretty predictable, and not at all in conflict with what we know about how COVID spreads.

Also, whether or not the kids would normally eat lunch in a communal lunchroom, versus in their classrooms, likely varies widely by school; it would not surprise me to learn that even schools with lunchrooms have had their kids eating in their classrooms during COVID.

Just because the windows are open it doesn’t mean there’s actually an active breeze coming in. And the size and effectiveness of the air filter might have been inadequate for the size of the space, and not necessarily positioned properly. Was it between the teacher and the students?

And, while the report indicates that the teacher (and, I would presume, the students) were masked most of the time, we don’t know how good those masks were. Were they close-fitting N95s or KN95s? Were they single-layer “fashion masks”? Or, something in between?

(I also note, on re-reading the report, that the teacher and the students all had the more-contagious Delta variant.)

Unmasked, symptomatic teacher infects student. It would be a story if she hadn’t.

“on May 23, an unvaccinated teacher had reported receiving a positive test result for SARS-CoV-2, the virus that causes COVID-19. The teacher reported becoming symptomatic on May 19, but continued to work for 2 days before receiving a test on May 21. On occasion during this time, the teacher read aloud unmasked to the class despite school requirements to mask while indoors.”

And, unvaccinated, as well.

California opened up vaccination to all people around March 25th 2021. Just for reference.

California opened up vaccination to all people around March 25th 2021.

Indeed, and as the CDC article linked to by the OP notes (emphasis mine):

Further transmission might have been prevented by high levels of community vaccination; at the time of this outbreak, approximately 72% of eligible persons in the city where the school is located were fully vaccinated.

There also seem to be some people who, due to some quirk of biology, spread the disease to a much greater degree than others. It might be just bad luck that this teacher who made the poor choices to go unmasked, not be vaccinated, and continue working while symptomatic, also happened to be a superspreader.

Just to reiterate what was already said (with 1 and 2 being most important):