Correct. So the best way to keep people from propping open the exit doors is to eliminate them or if you must have them, chain them shut. 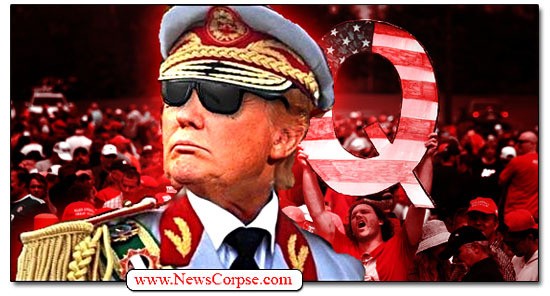 SRSLY? Now Trump is Calling the January 6th Insurrection 'a Hoax...Just Like...

There is a disturbingly impressive capacity for delusion among the the cult followers of Donald Trump, also known as the Republican Party. Like any other cult, they revere Dear Leader unwaveringly, and believe everything he says, no matter how...

On Saturday Trump held another of his traveling salivation shows. …

Trump’s address in Wyoming, like nearly all of his public rants, was a rehashing of the tedious playlist that he regurgitates on auto-spew. …

What was new at this event was that Trump expanded his list of verifiable occurrences that he considers to be a hoax. In addition to his first impeachment, his second impeachment, his extortion of Ukrainian President Zelenskyy, the COVID-19 virus, the Mueller Report, climate change, the 2020 presidential election results, and his well-documented connections to Russia, Trump is now adding the January 6th insurrection. He repeatedly made the claim that it was a hoax in Wyoming saying that…

“[Russia] was a hoax. And now they’re doing it again with the January 6th.”

So now Trump wants his glassy-eyed disciples to believe that the riots on Capitol Hill that everyone saw on live television, never actually happened. He has previously tried to gaslight his gullible groupies by saying that the rioters were merely peaceful protesters, or vacationing tourists, or even clandestine operatives working for Antifa and/or the FBI. But this appears to be the first time he has denied its existence.
…

I guess this could go in that thread that’s about magicians making really big stuff disappear, like the Statue of Liberty.

He didn’t make anything disappear. He just said it wasn’t there. It’s the gaslighting magician!

Fine, lets not mince words. It was treason.

Fine, lets not mince words. It was treason.

It was a seditious conspiracy. But too many people toss around the “treason” term as if they know what it means.

Can we call it “Republican sponsored terrorism”?

Somebody on Twitter I follow mentioned something funny about Trump’s latest JO session on Saturday. Trump did his usual bit of pointing out the press pen and having the rabid mob boo the members of the press. As it is, the mainstream sources of news have all pretty much abandoned covering these cult meetings. The only press in attendance are the likes of Newsmax, OANN, etc. Trump had his lackeys booing his own propaganda outlets.

The only press in attendance are the likes of Newsmax, OANN, etc. Trump had his lackeys booing his own propaganda outlets. -

At least they got something right.

Well I think there are two thoughts to this. Treason was the only crime defined in the constitution.

What I and the entire world saw on 1/6 sure seems to fit number one above. Attempting to overthrow the US government with force and violence, and installing yourself as president sure seems to fit.

Sure does for me.

But I’ll take seditious conspiracy too. I’ll take ANYTHING we can pin on that traitorous orange asshole

There are a lot of actions that most people would consider treasonous that would not fit US code, which defines treason is a very specific, strict way.

But so what? If you want to be pedantic about how it doesn’t fit the legal definition, go nuts, but it was close enough for most reasonable people.

The chief political difficulty in nailing him on “seditious conspiracy” charges seems to be inherent in the nature of those charges. Anyone capable of pulling off even a serious attempt at such a thing would, almost by definition, require that he have a considerable chunk of the populace in support of his attempt, so it’s a given that pursuing such charges would necessarily “tear the whole country apart.” How could it not? Declining to pursue charges would be an admission that you can attempt seditious conspiracy over and over, as long as you have some (20%? 30%?) popular support.

The country is already torn apart, and I do not feel that pandering to those who believe seditious conspiracy isn’t a big deal would help the situation.

Yes, this was the flaw in Gerald Ford’s reasoning. that prosecuting Nixon would tear the country apart and it was time for healing. You hear the same sometimes about Trump. It’s wall-to-wall BS.

At least they got something right.

Even a blind pig finds an acorn once in a while.

The country is already torn apart, and I do not feel that pandering to those who believe seditious conspiracy isn’t a big deal would help the situation.

Explaining seditious conspiracy to those that think it’s OK would be the hardest part.

When they don’t understand it, they will fall back on the old standby - “Fake News!!!111”