in another thread, there was a side discussion of L.beria a communist official that was pretty much Stalin’s right-hand man was a serial rapist well having been interested in soviet history i looked it up
and I clicked on the 2nd link on the search page gave me this doozy of a website’

with such treats as:

““Yes, communism is from other worlds out there – the reptilians and the greys. Lilith told me this. The reptilians use mass slave labor and the slaves are like nameless, faceless, emotionless and only a number. Just stay strong and know you are not working alone. Satan and the Powers of Hell are with you and an important ritual was done to wake up Russia. When you have the time, the meditation books should also be done, as Russia has been without spirituality for a very long time. Then, the xians come right back as soon as communism falls, just like fleas on a dog… Communism must be destroyed in Russia, as the energies for it are still there. There is a war going on in other worlds…communism versus freedom fighters. They really went head to head in WW2”

Xianity and communism are the same. Satan wants us to now focus on destroying communism. People need to know it is the Jews behind both. From what we have been getting in the news here, it appears the Jews are trying to resurrect communism again in Russia. They must be stopped. Several also in the JoS ministry are all getting the same message from Satan and the Powers of Hell – destroy communism. The problem is when communism goes down, then xianity is right back on the people. Most people are fooled into thinking xianity and communism are against each other and do not know that it is the same Jewish agenda designed to deceive the populace."

Since I brought up Beria in the other thread (as a joke), I feel vaguely responsible for your encountering this satanic drool.

So, how do they feel about Covid-19 vaccination?

I still can’t see any link to Santana in the OP.

I’m sorry, but reading the title just makes me think of this - 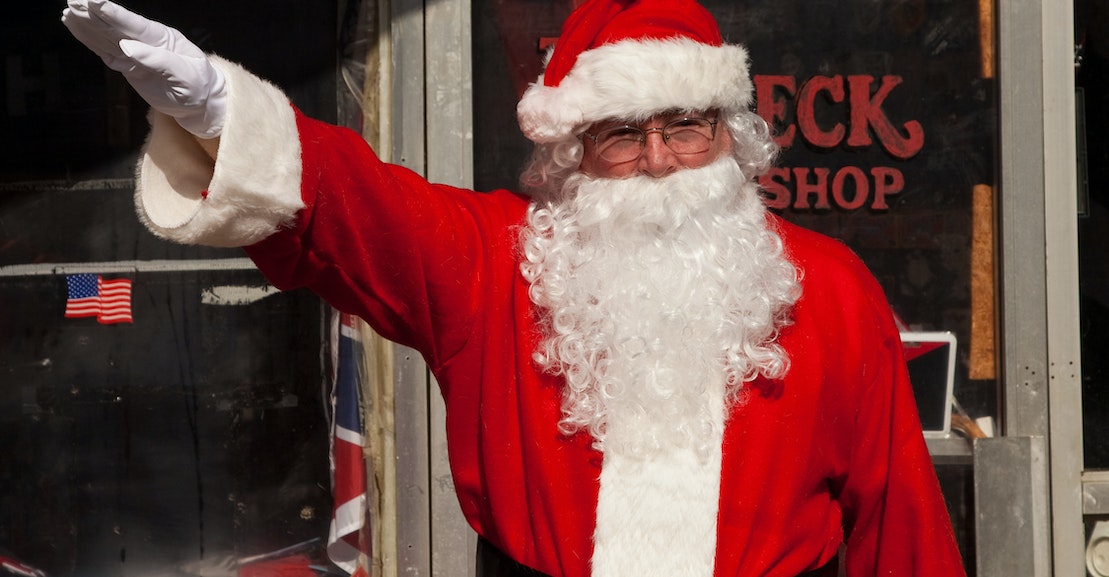 Hatred often hides behind a mask of jokiness.

Damn you, damn you and you santa - nic Nazis.

I think the traditional phrase at this point is, “I’ll see myself out now.”

The words you are looking for are “mental illness”.

“There is a war going on in other worlds…communism versus freedom fighters. They really went head to head in WW2”

But yeah: IANA doctor but I think “mental illness” is a reasonably solid conclusion to draw about that website.

I still can’t see any link to Santana in the OP.

Yeah, the OP has got to change their evil ways…

Edit: At first I thought they thought Nazis were communists, similar to my father, who sees essentially no difference between them because they’re both socialists, see! It’s in both their names, and that can’t be wrong. At least not with them. The same logic is not applied to the names of the DPRK or the PRC, which for some reason, despite having ‘Republic’ in both their names, he doesn’t consider to be republics. Shocking inconsistencies, I tell you!

But then I went and looked at the site.

Wait, I thought that Marxism was supposed to be an atheist philosphy? Was I wrong?

I’m pretty sure atheism hinges on hating humans to destroy all Gentile spiritual knowledge, or at least that’s what I getting from this quite interesting site. Was hoping to see a newsletter subscription link, but all I could come up with was, at end of article, “The New Soviet Psychic Discoveries: A First-Hand Report on the Startling Breakthroughs in Russian Parapsychology” paperback.

I’m a total pushover for this stuff!

Perhaps one of the Greatest SDMB Responses Ever.

Six or seven years ago, I would have agreed. Now unfortunately its hard to tell. You’re still probably right, but given the level of crazy that otherwise fully functional people seem to be accepting and promoting in past few years, it is no longer the only possibility.

The thought processes (if you can call them that) of the person writing that website are so disjointed I suspect actual mental illness.

However, as you say it all gets rather fuzzy when there is pretty clearly mass hysteria going on in broader society.