My understanding is that the Chicago show, on WGN, ran for far longer than the versions in other cities

Growing up in Wisconsin, the Chicago “Bozo’s Circus” was the archetype of clown shows. We often heard whispered rumors of how Mikey McGirkey’s cousin from Skokie got on the show and stepped on a clown’s shoe, no wait he tripped the clown! Yeah, all the cool stuff happens in Chicago…

…and that they still had kids in the studio audience into the late '80s or early '90s.

That might be a real tear-jerker of a nostalgia show. Get a bunch of interested oldsters to attend a careful re-enactment of a Bozo show as it would have been filmed back then. Same cameras, same lighting, same hokey sets, same period skits and lingo. And watch their reactions as the memories or imagined “memories” come flooding back.

And then there was the Red Light Green Light milk drinking game on Engineer Bill. That didn’t interest me, but he di dhave some of the most exquisite cartoons. There were some that were animated silhouettes and others based on Russian folk tales. I have fond memories of those.

I remember Engineer Bill. I had one of his Milk classes, where the more you drank, the higher you train “rank” was, from Gandydancer to Engineer, iirc That mights be the same Red Light Green Light milk glass.

My neighbor (trainman) explained that however, the Conductor was the real boss of the train, altho of course Engineer was considered by kids to be the coolest.

The local Popeye cartoon show in L.A. was hosted by Tom Hatten. He used to do a squiggle contest for his two kid guests.

And then there was the Red Light Green Light milk drinking game on Engineer Bill. That didn’t interest me, but he di dhave some of the most exquisite cartoons.

We must have been neighbors growing up. I grew up on Tom Hatten/Popeye and Engineer Bill too (Bozo never did interest me that much).

Engineer Bill had “Bad Habit Breaking” exercises – Each week, he’d choose a common childhood bad habit to break. A model train had to climb up an inclined ramp, pushing a block representing the bad habit. The train would make a little progress each day, and finally by the end of the week it would (usually) reach the top and push the block off into a wastebasket.

But never mind all that. I just watched Tom Hatten and Bill and Mouseketeers for the cartoons. E-Bill had an odd series of cartoons: Colonel Bleep, unicycle-riding space alien spy from afar, assigned to Earth of gather intelligence on our nascent Nuclear Age, which threatened the safety of the whole Galaxy. 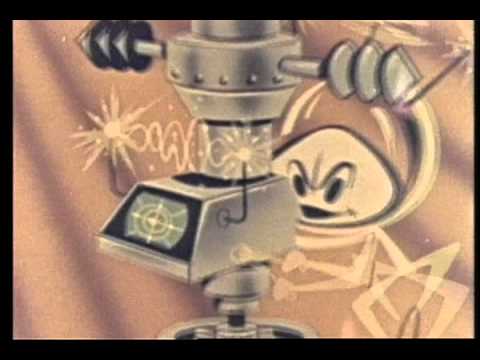 You can still see episodes of Engineer Bill and Colonel Bleep on YouTube. Whoda thunk somebody somewhere recorded those (who had videotape recorders in those days?), kept them all these years, just to post them on YouTube?

Colonel Bleep! I forgot all about him.

Do you remember Webster Webfoot? He was my favorite when I was about 3.

There’s a science fiction story that postulates that the first use of faster than light travel is to carry aging baby boomers far enough out into space to see “Howdy Doody” and other shows that were broadcast live and not preserved: “What Time is It?” by Jack Haldeman II (Joe’s brother).

Here’s another Colonel Bleep cartoon. The point being: These were made in the late 1950s, and some of them had a clear, overt, unmistakeable Cold War propaganda theme to them. Here, Bleep and his sidekicks battle a Sauron-like evil robot who has designs to conquer the galaxy universe with weapons of destruction:

I don’t think I want to see them again. They stay wonderful in my memory, instead of cheesy in the re-viewing.

I don’t think I want to see them again. They stay wonderful in my memory, instead of cheesy in the re-viewing.

Let’s not kid ourselves. They were cheesy the first time. That’s how I remember them. As in: So cheesy they’re funny. ETA: Definitely “dustbin of our cultural history” material.

P.S. Sorry, no, I totally missed Webster Webfoot. Don’t remember that at all. But I remember Calvin And The Colonel. Look that up on YouTube yourself if you dare.

OTOH, Rocky and Bullwinkle was a real winner of a cartoon series. 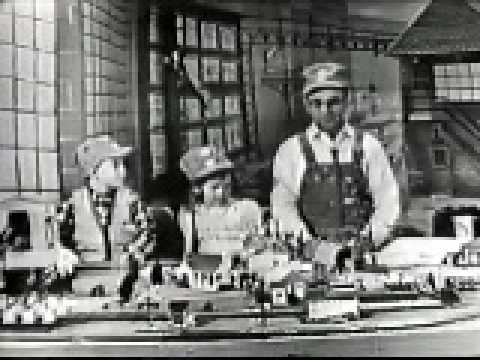 Growing up in Indiana, I watched Chicago’s Bozo Show regularly, and was surprised to see how long it actually lasted–into the 2000s! I even remember that traumatic time when Bozo’s voice mysteriously changed (actually, when Bob Bell retired from playing him, and was replaced by Joey D’Auria). I was a bit past the prime age for watching Bozo by that time, but I was still aware of it happening.

But Bob Bell’s portrayal of Bozo lives on. According to Dan Castellaneta, Krusty the Clown’s voice is based on Bell’s raspy-voiced Bozo.

Google doesn’t care about the alphabet.

Sorry, no, I totally missed Webster Webfoot. Don’t remember that at all.

He was a large puppet duck. Looked enough like Donald Duck that Disney would have probably sued. His birthday was February 31st!

Anyone else here from the Kansas City region, or NE Kansas. Remember Whizzo the Clown? I was on his show once. When Frank Wiziarde died my mom sent me the article out of the paper and I admit I cried a little.

Google doesn’t care about the alphabet.

Oh yeah? Just try getting them to show you some results without using one!

I suspect you’re right about the impending end of AAAAAAA Plumbing trying to be first.

Another item for the dustbin: The loss of “local” newscasts. In those days, long before cable, there were just the three network TV stations (ABC, NBC, CBS) and one or two local stations. The typical half-hour nightly news consisted of a few minutes of network news followed by the local newscast.

The anchors not only read the major news stories, but also commonly gave their own opinion editorials too. Network and local anchors alike did this.

KTLA was the local station in Los Angeles. Channel 5, IIRC. Their local news was decidedly right-wing conservative leaning. (All you who mentioned KTLA – Do you remember anchors name? Was it Putnam?) His editorials were decidedly right-wingish. In those early days of the Viet Nam war and the student protests at universities all over the country, he came down hard right. Bomb those Viet Cong into the Stone Age, and those commie hippy filthy drug-addled students along with them!

I think you mean
https://en.wikipedia.org/wiki/George_Putnam_(newsman)
The wiki claims he was a Democrat but also says that when he left KTLA he went on to found and host a conservative talk radio show.

I recall the name, but not much about him or his politics. We watched KTLA for junk like Bowling for Dollars with Chick Hearn. News came from NBC or ABC.

The wiki claims he was a Democrat but also says that when he left KTLA he went on to found and host a conservative talk radio show.

The parties changed places pretty much entirely during the 20th century; for a significant chunk of time during the century there were simultaneously very conservative people (and also liberal ones) in both parties. Given that Putnam was born in 1914 my guess is that he was one of the conservative Democrats.