Is the 60s "counterculture" responsible for a lot todays "alt right?"

Tom Wolfe was not the “leader” of the 60s generation. Neither was Abby Hoffman, especially. He was a self-appointed court jester.

Really. I mean I have mentioned it in other threads on similar subjects: the people who were sincerely into the counterculture as somethign revolutionary pretty much have stayed in that direction. Some may not seem as progressive because things may have outrun them, but they have not become the ultraright. Meanwhile the people who just adopted the styles and appearances of the counterculture for the sex/drugs/rocknroll, from among them came the ones who later became the Me Generation and then the 30Something Yuppies of the 80s. BUT, again, it was not universal… because, there is how while everyone was paying attention to first beats and folkies and then hippies and flower children, the largest share of Boomers were going to school, getting jobs, wearing pressed shirts though maybe foregoing the tie and getting only slightly more stylish haircuts than dad. These people largely grew to follow in whatever their parens’ social leanings were, though the cohort also split once they were out on their own. And something that has been mentioned but we tend to not really concentrate on, there was already an ultraright going around back when. Birchers and the remainders of the Dixiecrats and other such types in the 60s. These people did not just evaporate.

TL/DR: There was not one “counterculture” of the Boomers, there were always many cultures in the population, and today’s groups picked up people from all of them. The Reaganite and later the Tea Partier and now the MAGA cannot say “look what you made me do, hippie”.

To me the average MAGA foot-soldier is less likely to be the former faux-hippie who hung out around Berkeley just for the Scene, nor the child thereof, but rather more so the guy who was watching his TV in West Virginia or Boisie and was appalled at what it told him the hippies were doing, and his child, who was not going to San Fran with flowers in his hair but expecting to go on living pretty much like Dad, except that by the time he got to grow up the factory was no longer there. But neither maps exactly.

I too am curious how anyone born before the end of WWII could possibly be a boomer.

And when was Abbie Hoffman born?

What I always say is that the baby boom generation was so large that we were effectively two generations at once. We were the Deltas and the Omegas. We were the rebels and the suck ups. We were Bill Clinton and Newt Gingrich. We were machine and being. We tasted great and were less filling. We were a floor wax and a dessert topping. We contained multitudes.

We need to start before the Boomers.

People today are mislead by the fact that the masses turned against the Republicans in 1932, and read into that the assumption that a leftist wave overturned the conservatives. That’s a half-truth at best. The Hoover Republicans were economically conservative and closely tied to business, but still contained many from the Progressive movement, which had merged with the Republicans. Nevertheless, Republicans were the party of small government and fought Roosevelt’s attempts to use government to aid the masses every step of the way. In addition, the Southern “Dixie” Democrats were just as conservative and even more racist. By his second term, Roosevelt was losing as many battles as he won.

World War II proved the necessity of federal control but other attitudes hardened. Asian-Americans, not just those of Japanese heritage, were demonized. African-Americans now could compete for jobs that white workers had left and created tremendous resentment. The majority of America’s most deadly race riots took place during WWII, not the sixties.

Post-war was not peaceful and idyllic. After the vets came home, they threw women and blacks out of the workplace. Socialist and communist-led unions were systematically destroyed and were no longer needed; with the U.S. the sole untouched industrial nation companies could give unions astounding – and as it turned out completely unsustainable – benefits without strife. Unions turned into bastions of the right. The country moved with them. The anti-Communist HUAC that started star chamber hearings before the war blossomed into a national hate group with amazing power and influence. The Cold War induced paranoia everywhere. I believe that created the flying saucer scare and the paranoic themes that pervaded fifties movies. Sputnik exacerbated those feelings, along with the Cuban Missile Crisis.

Sure, a movement called hippies flourished for a couple of years in the late sixties in response. And in response George McGovern lost the 1972 presidential election by 23 points. After the Watergate blip that allowed Carter in, Ronald Reagan, the conservative god, won three terms. (Yep, I credit 1988 to him.) Lowering the voting age to 18 just meant that a larger percentage of potential voters didn’t vote. Older voters have always voted in larger percentages. These older voters are mostly ones who have always been conservative, were brought up by conservative parents, lived in conservative neighborhoods, and maintained conservative prejudices stoked by conservative politicians and pundits. They tend to live in rural areas that are almost completely white, are blue-collar rather than white-collar, and are majority male. They’ve always been angry, always targeted Others, and always used religion as a sword and shield. They’ve never changed: they’ve congealed.

BTW, Thomas Wolfe was a novelist who wrote Look Homeward, Angel. Tom – always Tom – Wolfe was a conservative journalist who also wrote novels. He was famed as a part of New Journalism and very good at it, but never at any time the voice of any generation. If the hippies had a voice, it was during the five minutes Hunter Thompson was sober. The difference between the two should be obvious.

My theory is simpler

Originally (in this wording, anyway) posted by H. L. Mencken:

Explanations exist; they have existed for all time; there is always a well-known solution to every human problem—neat, plausible, and wrong.

Tom who? Hunter S. who? No, in the actual sixties Sixties, the one hailed as the voice of his generation was Bob Dylan. He didn’t like it, but he sure got the acclamation all right. Wolfe spent the '60s writing about New York socialites and cocktail party conversation along with bored teens and car customizers. Hunter S. Thompson did write the classic 1967 essay explaining hippies to everyone else (“the best year to be a hippie was 1966, though the only hippies who count were back in 1965”), but he was an older observer too, born in 1937. He was less a hippie himself than a hip journalist who could translate hippieness to squares. Then he wrote about the Hell’s Angels, and questioning the relationship between Hell’s Angels and hippies would really open a can of worms. But Thompson didn’t become famous until the '70s with Fear and Loathing in Las Vegas, a paranoiac and drug-addled obituary for the counterculture that has more in common with the Easy Rider line “We blew it, Billy.”

Fear and Loathing on the Campaign Trail was a better read IMHO.

But Thompson didn’t become famous until the '70s with Fear and Loathing in Las Vegas, a paranoiac and drug-addled obituary for the counterculture that has more in common with the Easy Rider line “We blew it, Billy.”

With the right kind of eyes, you can see where the wave crested and broke…
…right. By the time this came out, the organically grown, as it were, counterculture had already peaked and the parts outside that hard core had degenerated. Alas to a lot of the public, the degenerate version that made mass media was what they identified as “counterculture”. Which is why to this day there continues an effort to undo everything that was achieved over that time, because it all becomes identified as the work of “dirty hippies” destroying “values”.

This is insightful. The best theories are the ones that make complex things as simple as possible without overdoing it.

However, I don’t think “selfish” is quite the right word. Internally focused? Isolationist? Also, obvious this generalization does not apply to everyone, even most. Interestingly, the greatest support by percentage, for American Conservatives, come from those in the 45-60 age range, where most other age groups are more evenly split. At least according to a recent thing on (538 .com) not worth linking to.

This is not even a little bit insightful. To make the argument work you have to assume that there is exactly one boomer who once smoked pot and protested the war and now votes for Trump instead of there being a minority of boomers who protested in the past and a larger fraction who now vote republican but who, with some exceptions, are not the same people.

That poll shows that Republicans are basically white men without college degrees. Which we’ve known for decades. Why does this bit about boomers keep coming up?

Why does this bit about boomers keep coming up?

Because the post boomer generations need someone to blame for, well, everything and everyone other than their generation make for the perfect villains.
That boomers themselves also had this fault, but hopefully realized it’s folly, just serves to make it all the more amusing.

Here’s a gift link to the story. It’s illuminating on this issue. 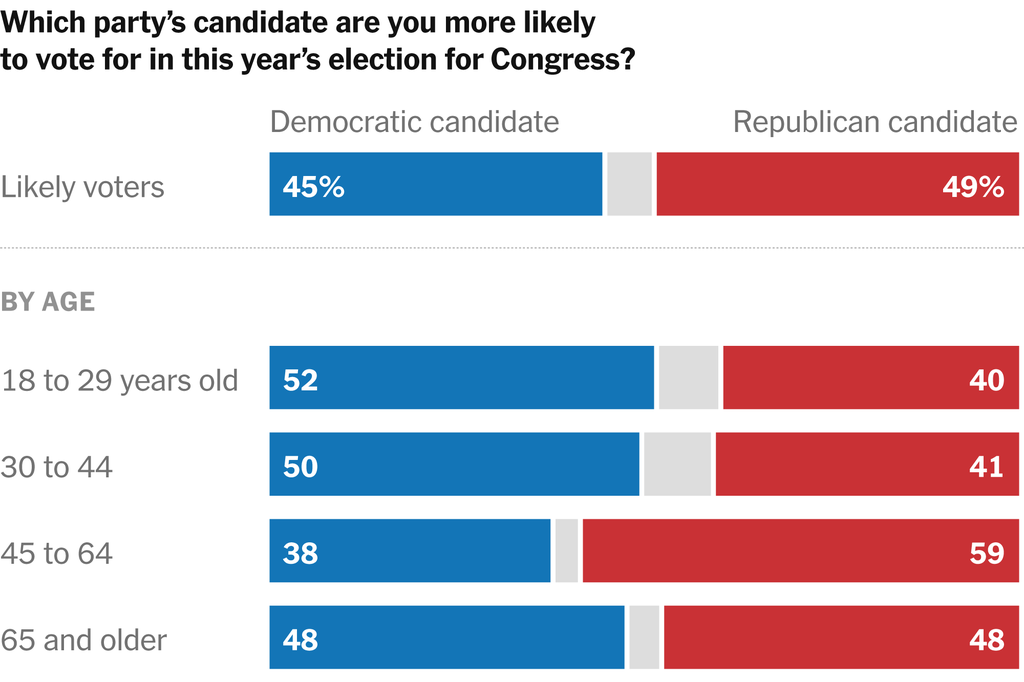 With elections next month, independents, especially women, are swinging to the G.O.P. despite Democrats’ focus on abortion rights. Disapproval of President Biden seems to be hurting his party.

Conservatives have always backlashed against any gesture toward progress. The more abrupt the progress, the more vicious the backlash. So you could say that the MAGAs are a consequence of the 60’s counterculture, but it would be a mistake to say that the coutnerculture is responsible for it. That just feeds into the right-wing trope that conservatives are independent manly men who can’t be pushed around, and yet they cannot possibly be held responsible for bad behavior because whatever it is, the hippies made them do it.

Again, that’s a consequence, but it would be a mistake to call it “responsibility” because regardless of the permission structure, right-wingers were always destined to turn into fascist trolls the moment it became clear they were going to have to share power with women, the poor, and people of color.

Just because it usually doesn’t apply and is perhaps too simple does not mean it lacks insight. Remember most people are apolitical and probably had mixed feelings about the war based on what and who they listened to, and also when.

Yes, unfortunately its us Gen-Xers are probably more to blame for Trumpism than anyone else. I blame Beavis and Butthead.

Because the post boomer generations need someone to blame for, well, everything and everyone other than their generation make for the perfect villains.

The average age of Members of the House at the beginning of the 117th Congress was 58.4 years; of Senators, 64.3 years. SOURCE

In case there is doubt, those are all boomer ages and the 117th congress is our current congress.

Want to bet congress has been boomers for a long time?