I presume Nurse was trying to prioritize defence. The team had many chances and Nurse was not to blame for the late game fouls or partial inability of guys like Siakam and Anunoby to finish. Life in the bubble must have been frustrating. The Celtics are consistently excellent and were the Raptor’s bugbear all season due to similar styles and strategies.

The team has not published the details of Nurse’s “multi year contract extension”. I’m glad to see it. Nurse is clearly a genius with an eye for underappreciated talent and won the Coach of the Year in consecutive seasons. 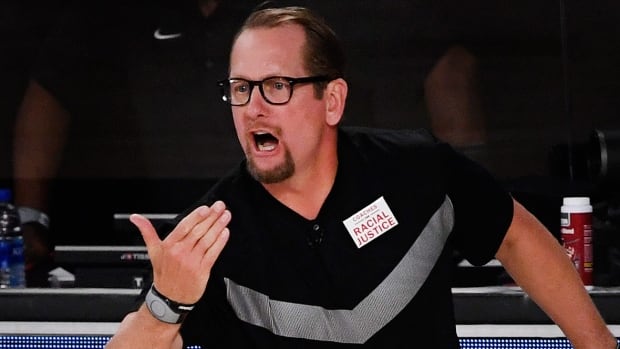 The Toronto Raptors have signed Nick Nurse to a multi-year contract extension after the second-year head coach guided the team to a 53-19 regular-season record before losing to the Boston Celtics in Game 7 of the second round of the playoffs last...

Nurse is clearly a genius with an eye for underappreciated talent and won the Coach of the Year in consecutive seasons.

Nurse has won it in one season, this season. Last year’s winner was Mike Budenholzer.

And the Clippers blew it. They blew it big time, turning in an absolute turkey of a performance in Game 7.

Names on the jerseys are different, but they’re still the Clippers. It’s kind of reassuring, in a way.

I’m willing to say that the psychological effects of the bubble are a significant factor. Still, pretty surprising, though I think both LA teams are slightly overrated.

The Heat-Celtics game was interesting, with Boston playing a great first half. But they were badly outscored 37-17 in the third quarter and it was even with maybe five minutes left. But they ran out of energy as Miami held on for their second win and second double-digit comeback.

I don’t know if Boston can contain Jimmy Buckets (Butler) and Dragic. They have four players who are consistently good but are playing 40+ minutes a game - and looking so by the end. I will call Boston in 7 but they are looking threadbare and will somehow have to turn things around.

Game 1 of the Celtics/Heat series was FANTASTIC and had me on the edge of my seat.

The first game was the best. The next two had their moments. In Canada, they were shown on free TV but hard to find as TSN3 and SN360 are in the mid-hundreds, channel-wise.

Nuggets outstanding against LAL but lost in the last second to go down 2-0.

With the Raptors out of commission, this thread has been quasi dormant. But Game 5 of the Heat-Lakers contest was great. Many of the games have been.

Jimmy Buckets could not be defeated by a head jarring cheap shot and, despite King James and 40 points, held on to force a sixth. Most games have been close, contested and at a level worthy of the championship.

It saddens me because the Raptors have ruled LA for the last two seasons and the five before that. Coulda been a contender, but they couldn’t beat the Boston Green. And they couldn’t keep Danny Green, shooting well for LA. Let’s hope they have better luck with their Prez, Gasol and VanVleet.

And the year of the bubble finally comes to an end, with the Lakers winning their 17th title.

As a long-time Lakers fan, it’s weird seeing a title team without Kobe, Shaq, Magic, or Kareem. But I guess Lebron and Davis will be added to the pantheon of Lakers’ greats.

Last night was really the only playoff game I watched all year. No bars to go to after a late night at work and we cut the cord years ago. And besides that, the playoffs almost always end in late June so I don’t think of basketball at all this time of year.

Back to Lebron James for a moment, I don’t know if any of the great players can say they’ve won three titles with three different teams. I know Shaq won with both LA and Miami, but most of the players that won with multiple teams have been good journeyman types like Robert Horry (or Danny Green). Certainly, if Kawhi Leonard can do it with the Clips, he’d be in that conversation.

But what’s really remarkable about James is that James has won with three teams, with three different coaches, and many different combinations of players, not all of them all that good, either.

Long-time Lakers fan here as well. I wasn’t able to watch any playoff games this year for various reasons, but it’s still awesome that they pulled through when everyone said Milwaukee or the other LA team would win.

I was pleased to see VanVleet staying in the six.

They got him af the number I thought theyd land on all year, so that is good. Gasol wasn’t great this year offensively but he was a big body. They will certainly miss Ibaka though. They picked up a big body in Baynes, but I reckon they need to find another, unless Boucher develops, I guess.

Gasol was hit or miss, but a good defender overall. Losing Ibaka is a blow, but he can be inconsistent too. Since Nurse can spin straw into gold, they must see some potential in 34 year old Baynes. Don’t know much about Bembry, but Boucher is worth holding on to, and only four seasons in. And VanVleet and Lowry are the heart of the team.

Portland needs to shed some dead weight like Anferny Simons, Zach Collins (who seems to be too fragile for the NBA), and Hezonia, who, while quick and agile, can’t seem to make good decisions on the court and can’t finish a layup to save his life.

Well, at least they got rid of Hezonia. Collins is out again with an injury. The guy really needs to find another way to make a living. Looks like Hassan Whiteside has decided not to stick around. Somebody is going to get a killer when they recruit him, as long as they play him as a starter. He was who kept Portland alive into the playoffs last year. Portland has brought back Enes Kanter, who did a good job for them last time he was here, but I still don’t see Portland getting past the first round.

So Giannis signs his extension with the Bucks.

Boy, that sure took a dump in every other teams’ Cheerios that was hoping to lure him away from the Bucks next offseason.

Something refreshing about him wanting to build a winner where he already is rather than running to Brooklyn or Golden State or LA to score an almost automatic ring.

The Raptors hoped to get him. I always felt that was a bit unrealistic. Now it is official.