To me, Lost was worse than a lot of the others, in that it got dragged out over multiple years of introducing additional weird mysterious elements, that even in the planned finale, still were never addressed. (Yes, I am in the “the Lost finale sucked” camp.)

I actually liked the way Lost was ended. The problem with Lost wasn’t the ending, it was the middle. They went from a series about a good mystery and the people involved trying to solve it and turned it into an evil organization using science for evil purposes stories. The finale took it back to the origins, and I liked that.

Writers could also structure such shows so there isn’t an unsolved mystery in the first place. They know generally what the weird thing is that’s going on and the drama of the show comes with trying to figure out how to deal with it.

That was pretty much how Stargate: SG1 worked. They figured out the whole Goa’uld and System Lords setup pretty quickly, and the rest of the series was them gradually expanding their abilities to fight said bad guys. They could have had a satisfactory series finale in almost any season. Even the short-lived Stargate:Universe, which ended on a cliffhanger, ended on a thematically appropriate cliffhanger, that was both a decent end to the series, and good hook for any potential new seasons should someone else pick up the series.

I blame the presence of so many of these shows on the success of Lost.

What I don’t get is none of these other Lost-type shows have been successful, at least on Network TV… They’re pretty much a guaranteed one or two season cancellation. And they got be pretty expensive to make. So why do they keep trying?

I think that’s pretty much the cause of the problem. They cancel these shows too early, before they can really gain a following, and then when they try again even less people start watching live with season 1 because they are waiting to see if it continues, which causes it to be cancelled, and on and on… Last time NBC suckered me was with the one-season summer show Persons Unknown, (from 10 years ago and starring a then newcomer Chadwick Bozeman!) a mystery show with an intriguing premise that promised answers… and ended on a cliffhanger that was never renewed for season 2.

Wasn’t there one about a Dome that was meant just to be a short run?

Under the Dome was originally intended as a limited series, but was popular enough that it wound up running three seasons (39 episodes total).

That second season of UTD, when the writers scrambled to extend a story line they thought was going to be one season and done, and had no clue after that, was delightful insanity. I mean, there are shows that are bad, but they are usually mundanely bad, written-by-committee affairs.

By season 3 they got a new showrunner I heard, and the story line got tightened up and became just mundanely bad.

My prediction is that La Brea, a show about a giant sinkhole in the middle of LA which is really a hole to a primeval world, will join their ranks. Potentially intriguing premise, and we will learn nothing before it is cancelled.

Maybe they can use the sets and dinosaurs from Terra Nova which lasted- you guessed it- one season.

Maybe they can use the sets and dinosaurs from Terra Nova

I haven’t spotted any dinosaurs in the promos. The blurry or partial images of animals that could be Teratornis and Smilodon make me wonder if they will stick with the La Brea Tar Pits theme and use pleistocene critters.

Terra Nova is another of the shows I watched die early. The name didn’t pop up in my head, though. My brain was conflating it with Earth 2.

I haven’t spotted any dinosaurs in the promos.

I haven’t watched any promos, just from the description it sounded like every other “hidden land that time forgot” plot, and those always have dinosaurs in them. I look forward to how they explain people and buildings surviving a sinkhole deep enough to have another world in it.

The bad thing is that I will probably try watching it anyway.

I look forward to how they explain people and buildings surviving a sinkhole deep enough to have another world in it.

The sinkhole isn’t conventionally deep - it is obviously a wormhole or something similar. One wonders how much modern science fantasy you have consumed

One wonders how much modern science fantasy you have consumed

That’s why I will watch this show. I obviously need more experience in the genre!

I saw a promo and I’m in. I love this kind of dipshittery. If they’ve got a good cast, it might last. I notice a lot of these have iffy casting and they go down in flames. I’ll point at “Manifest” as evidence that the right cast will keep a nonsense show afloat.

My prediction is that La Brea, a show about a giant sinkhole in the middle of LA which is really a hole to a primeval world, will join their ranks. Potentially intriguing premise, and we will learn nothing before it is cancelled.

Marshall Willanholly, driving in his Expedition, meets the greatest sinkhole ever known.

Well… that was … something.

Horrible writing. Horrible acting. Name checking “Lost”. The main character seems to think the answer to every problem is “Run!”, and somehow manages to outrun a direwolf(?) and a sabre-toothed tiger.

“I don’t have to outrun the direwolf…” 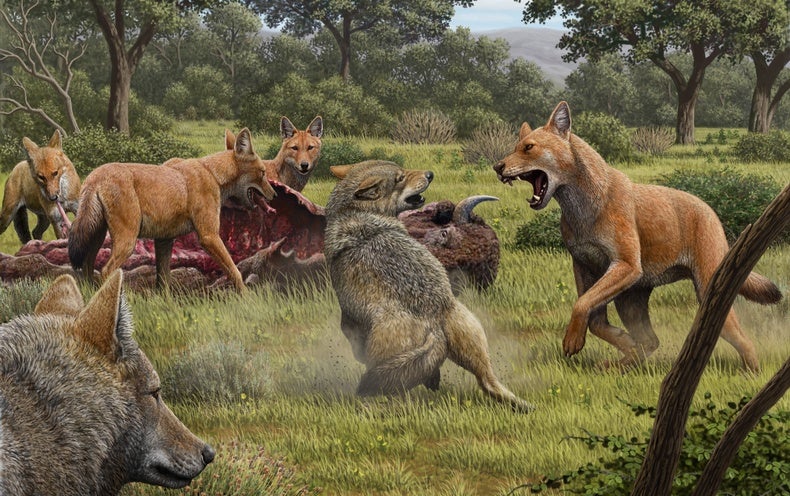 The extinct giant canids were a remarkable example of convergent evolution

Oh, my sweet merciful TV gods. Thank you for blessing us with this cheese-tastic show. Every stereotype you want. Every simpering plotline from every rescue show ever. Dinosaurs. And Psychic Visions.

Please let this show stay on the air so that I may bask in its badful badness.

Edit: The teen characters have TicTok’s. It came up immediately on my FYP. Multi-layered cheese is the best cheese…

To me, Lost was worse than a lot of the others, in that it got dragged out over multiple years of introducing additional weird mysterious elements, that even in the planned finale, still were never addressed.

… with the head writers promising over and over: “We have it all planned out. All mysteries will be solved, with plausible scientific explanations.”

Good reference to The Prisoner upthread. The first show that really grabbed my imagination and, like Lost, was unable to wrap everything up at the end without getting weird.

I have to admit that when I saw ads for this my mind went back to Land of the Lost. Do they run into the Marshalls?

I loved “Manifest”, for the most part, although it was very uneven.

BTW, a 4th season is in the works and will air on Netflix.

I don’t think any of the characters have a name yet for the glowing tear in the sky, so I am going to refer to it as the Rift, or Time Rift.

They need to explain the “psychic visions” really soon and spell out the ground rules, because random unexplained magic powers strain my willing suspension of disbelief when we already have a giant Time Rift to deal with.

It seemed like Dr. Nathan (important scientist lady) and Agent Markman (important government guy)
from Homeland Security (They now have jurisdiction over unregistered time travel) have seen a Rift before. Did they say it was over the Mohave?

Gavin (ex air force pilot dad) said he started having visions after crashing a plane in the desert. Would that have been the Mohave Desert? He flew through the periphery of a Rift and his brain is now Quantum McGuffined ©® with it?

My big question is why is there a Time Rift? Was Enoch experimenting in the pylon again? (Picture wild-haired Giorgio Tsoukalos in your mind - “I’m not saying it’s Sleestaks, but its Sleestaks!”)

When do the Sleestaks show up?