I don’t understand why the deal is being held up over the statistic about the percentage of fake accounts being more or less than five percent. Was he hoping the number was higher or lower?

The answer to your question is “Yes.”

Was he hoping the number

It’s called “plausible deniability”. He’s already made up his mind and just needed any sort of convenient excuse.

Of course, it’s only his fanboys for whom this excuse is plausible.

I’m sure he doesn’t care about Twitter stock holders but if I owned Tesla stock, I’d be incensed.

Of course, it’s only his fanboys for whom this excuse is plausible.

To clarify, one of Musk’s stated rationale for needing to purchase Twitter was to eliminated the accounts operated by ‘bots, as well, of course, as ensuring “freedom of speech” (because this is Elon’s undying principle unless someone is using free speech to criticize him) and ending the practice of “perma-bans” of people who post racist bullshit and incite violence, i.e. former twice impeached president and insurrectionist Donald J. Trump who Musk hopes to impress so he can have a place in a hypothetical future Trump regime.

I’m sure he doesn’t care about Twitter stock holders but if I owned Tesla stock, I’d be incensed.

*shrug* When you buy into an investment based upon radically inflated valuation you kind of deserve what you get. I’m moreally certain somebody made a killing shorting Tesla stock, and it wouldn’t surprise me if that person’s initials were ERM.

He would have to persuade many millions of people to make the switch.

It takes talent to cause Tesla to lose $126 Billion.

A market capitalization decrease of $126 billion is not at all the same thing as a company losing $126 billion.

It’s not impossible. But you have to overcome the inertia of many millions of people. People are more aware of some less pleasant truths about digital media (which could improve) which make celebrities less likely to personally post or be spontaneous (or so I am told). The alternative has to be better.

So I come up with a platform allowing short statements of a certain length. It promises more or less moderation. It is better in ways I cannot describe. Nothing happens to the highly archaic Section 230 rules. This appeals to certain niches. But I do not have a first mover advantage. It has to appeal to almost all of the niches. A tall order.. An economic moat, so Buffett might say.

I was bored, sue me.

Elon went to buy Twitter, he was lookin’ for a sosh’ to steal
He was in a bind ‘cause he was kinda blind
And he was willing to make a deal

When he came across this young man Tweetin’ on a keypad and playin’ it hot
And Ol’ Elon jumped up on a hickory stump
And said, “boy, let me tell you what”

“I guess you didn’t know it but I’m a market maker too!
And if you’d care to take a dare, I’ll make a bet with you.
Now you play a pretty good tweeter, boy
But give Ol’ Elon his due
I’ll bet a crypto of gold against your soul
'Cause I think I’m better than you!”

The boy said, “my name’s Jacky, and it might be a sin
But I’ll take your bet, you’re gonna regret
'Cause I’m the best there’s ever been.”

Jacky, rosin up your bow and work your Board real hard
'Cause Hell’s broke loose in Twitter, and the devil deals the cards
And if you win, you get to keep your Twitter made of gold
But if you lose, the Elon gets your soul!

Now Elon opened up his case and he said, “I’ll start this show”
And fire flew from his fingertips as he typed hard on his phone
And he clicked the send across the keys, the Tweet was an evil hiss
Then a band of demons joined in, and it sounded something like this…

When the Muskrat finished, Jacky said,
“well, you’re pretty good, ol’ son.
But sit down in that chair right there
And let me show you how it’s done”

“Fire on the Keyboard” run boys, run
The devil’s in the House of the Rising Sun
Chicken in a bread pan pickin’ out dough
Elon, does your bid bite? No, child, no

Old Elon bowed his head because he knew that he’d been beat
And he laid that golden Twitter on the ground at Jacky’s feet
Jacky said, “Elon, just come on back if you ever wanna try again
I done told you once, you son of a bitch, I’m the best that’s ever been!”

He played “Fire on the Keyboard” run boys, run
The devil’s in the House of the Rising Sun
The chicken in a bread pan pickin’ out dough
Elon, does your bid bite? No child, no!

I think there is still a decent chance Musk closes on the deal at his original offer price–note that I am not willing to put my money where my mouth is and invest in TWTR stock which would give me a guaranteed return if the deal is ultimately executed at the agreed upon price. Why do I think there is still a chance? Because buying Twitter was always an act of ego, not well thought out, and even a very rich man can end up doing something that he doesn’t really want to do when his ego is on the line.

I do believe his recent reticence is entirely because in a moment of sober reality he realized he was about to spend a lot of money on a company that tech investors have been saying for years is the least valuable of the major social media networks, with the smallest user base, and with poor prospects for meaningfully monetizing said base.

He may attempt to push Twitter’s board to accept a lower price, which I think will be difficult/complex for them, and the already extant investor lawsuits will likely get greater in number and more serious if the board agrees to a lower offer. I do not believe anything relating to the bot accounts will satisfy the very high legal requirements for Musk to be able to back out of the deal without paying the $1bn walk away fee.

He would have to persuade many millions of people to make the switch.⁢

Facebook did that by bringing in people who had never been a part of a social network before. It didn’t have to try and get the bulk of its users from an existing platform. MySpace never had the reach or social ubiquity that Facebook does, let alone Twitter. It wasn’t like every company had a MySpace the way every company now has a Twitter. It wasn’t like every celebrity or content creator was on MySpace, either.

Sure, over a long enough time span, maybe a new micro-blogging platform could dominate, if it had something that would make it better than Twitter and can afford to wait long enough.

It’s not impossible, but Twitter has a lot more inertia than MySpace ever did.

I was bored, sue me.

Oh, trust me, he will. He will. Elon Musk is nothing if not litigious. One of these days he’s going to accidentally end up suing himself for auto-defamation.

Also, Bob Dylan isn’t going to sue you for appropriating his rhyming scheme and structure, but he does want to make sure that you never actually put this to music.

Also, Bob Dylan isn’t going to sue you for appropriating his rhyming scheme and structure, but he does want to make sure that you never actually put this to music.

Not Charlie Daniels (Million Mile Reflections album: The Devil Went Down to Georgia)?

Not Charlie Daniels (Million Mile Reflections album: The Devil Went Down to Georgia)?

I was reading this to “Tangled Up In Blue” but you may be correct. 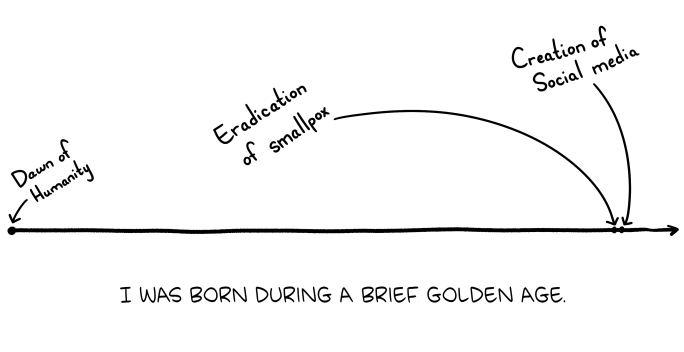 The time difference between MySpace and Facebook was pretty small. Twitter has had many years to dominate a market, in many countries, where user growth likely follows an exponential curve.

Twitter doesn’t have any meaningful inertia, their slow user growth has been decried since at least the early 2010s. It mostly seems like the people who like what Twitter offers know about it and use it, most of the rest of the population know about it and don’t care to use it. It has around 290 million global users, which means it is a major social media network, but significantly smaller than many prominent ones.

Facebook the goliath in the industry has around 2.7 billion monthly active users. Facebook owns two other quasi-social networks that have more users than Twitter as well: Whatsapp which has 2bn MAU, and Instagram which has 1.2bn MAU.

Snapchast and Telegram have around 2x as many users as Twitter.

Twitter also has a poor monetization prospect. Facebook, because you put so much personal information in it, and because they have very complicated things in it like Events, Groups, Fan pages, Business pages, et al, can track complicated “like” behaviors towards them, combine them with all your demographic information, and make you part of a valuable “target customer set” for advertisers.

Twitter users basically share almost no personal information to setup Twitter, and only do limited interactions that create the sort of valuable data Facebook usage creates. The main way companies actually advertise on Twitter is through tweets, which are free, which undermines their sales of impression ads.

Musk has a plan to make people pay to send tweets to large numbers of people, but we’ll see how that goes over.

Banning Trump off Twitter has quieted his general media exposure immensely. Which is good thing both for my day-to-day patience and far more profoundly I think, potentially what’s left of American democracy. Which I realize sounds a little apocalyptic, but I do worry that given his lazy man’s outlet of Twitter he’d be rather more effective at rallying and riling his ignorant legions.

Banning Trump off Twitter has quieted his general media exposure immensely. Which is good thing both for my day-to-day patience and far more profoundly I think, potentially what’s left of American democracy. Which I realize sounds a little apocalyptic, but I do worry that given his lazy man’s outlet of Twitter he’d be rather more effective at rallying and riling his ignorant legions.

I kind of agree with you, which is why I wrote “kind of looking forward to”, but I also think his general media exposure was more influenced by the end of his presidency. Yes, those who are active twitter users, which include most journalists, think twitter is a reflection of what’s of national interest, instead of an extremely biased sample of the population, but Trump’s statements through his short lived blog, rallies or reported by “a source close to the conversation who is kept anonymous for fear of reprisal” still make it into the mainstream media. I also think that, not being forced to by daily briefings, he’s spending less time thinking about all the details of the national and global political and economic situation.

I could be dead wrong though, and it would certainly be for the best of the world if he’s not allowed on social media if/when he officially starts campaigning for 2024.