Fear of accusations of “appropriation”?

Just because a work if art seems autobiographical, doesn’t mean it is.

Fear of accusations of “appropriation”?

I think it’s more a side effect of social media. Artists are expected to be constantly talking about themselves, to present an “authentic” version of themselves to the public, that it’s started to leak into their actual work.

Anyway… I was listening to Billy Joel’s Zanzibar the other day, for the first time in a long time. Now, I’ve know the song for most of my life, so I’ve never really put much thought in the lyrics. I mean, I knew who Pete Rose was, and I got the baseball-as-sex metaphors, but the first few lines always seemed somewhat opaque:

Was Ali some sort of nightclub performer? He was dancing, and he was giving rounds of drinks for free, but what was “go downtown” all about? It probably wasn’t sexual, but then what did those lines mean?

I pondered the words for a while, and then I realized: He’s talking about Muhammed Ali. It’s a sports bar! They’re watching a boxing match! It all clicked together. I have no idea why it took me 40 years to figure it out.

I was today years old when I learned the line

this little piggie went to market

Meant the pig was slaughtered and sold at market, not that the pig took a shopping basket and bought some groceries.

My interpretation of the rhyme is a morality fable about the perils of gluttony. It tells in alternate lines the stories of two pigs. The first was sold at market, the second stayed at home, the first was fattened with a lot of food, the second was given none, and the first screamed as it was slaughtered.

This is entirely folk etymology, but it’s my theory and I’m sticking to it.

A letter to the New England Journal of Medicine suggests the following Latin names for the toe bones, from largest to smallest:

I was today years old when I learned that Ron Jeremy was an extra in 1984’s Ghostbusters: 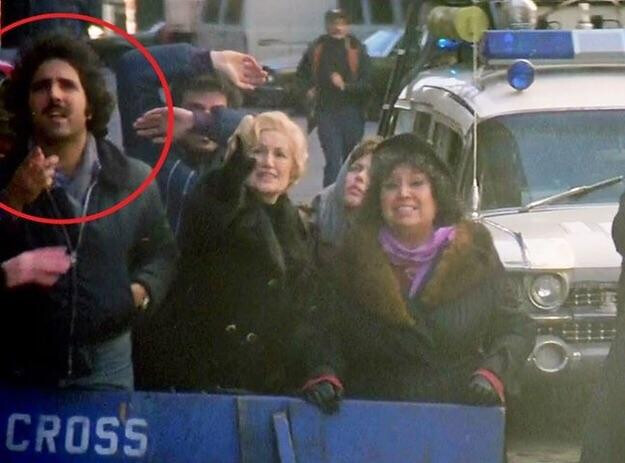 I am gobsmacked. I had no idea!

This message board might (arguably) be on its last legs, but there are still moments when the half-century-old-and-counting purpose behind “Cecil Adams” persists: “ignorance fought.”

Not with his clothes on, no.

If you’re 4 and being lied to by mom, correct.

But being 54 and having this explained to you, yes, it’s definitely obvious that the entire sequence is about raising pigs to be sold/slaughtered.

Sorry. I was referring to the Ron Jeremy picture.

Well, he is known as “The Hedgehog.”

In more recent Ron Jeremy news, I read earlier today that a grand jury has indicted him on over thirty felony counts. So I wouldn’t expect to see him in the Ghostbusters remake.

Well, as the saying goes, a fox knows many things, but a hedgehog knows one big thing. And apparently that big thing is sexual assault.

But being 54 and having this explained to you, yes, it’s definitely obvious that the entire sequence is about raising pigs to be sold/slaughtered.

I tend to prefer the less grizzly interpretation of “this little piggy went to market”; it is a children’s rhyme, after all.

There’s a song by Uncle Bonsai called To Market, to Market (Pigs). The last verse is:

Trojan pigs and jungle pigmies
Butts, and flanks, and shanks, and feets
Proper pigs with pickled pig knees
Pigskin punting in the streets
Pig-me-ups and pig pollutants
Pigs at bay, at work, at war
Pigs to pork and fresh Pig Newtons
That’s what piggy parts are for

I don’t know how many times I heard that song before I realized that “pigs at bay” was a reference to the Bay of Pigs.

I just saw an episode where Burger is quoted as saying that the point of the trial isn’t winning or losing, but rather achieving justice.

Modern prosecutors say that justice is not a result, but a process. If the trial was fair justice has been achieved even if a person who did not commit the crime is convicted. Antonin Scalia agreed with this viewpoint.

Modern prosecutors say that justice is not a result, but a process.

(I didn’t make that up as a caustic comment. I’m reporting.)