Thanks, that’s an astonishing number. 1 out of every 8000 people.

I’d be interested to know what the average amount of flights per year per person is for US and globally. I’d guess maybe 4 for the US and less than 1 globally.

I saw a map once showing all the planes in the air over the continental U.S. at the time the FAA ordered the skies cleared on 9-11. I was amazed at just how many planes were up on what was otherwise a typical September weekday.

This might be somewhat useful - see graph in article - while traffic varies day to day - fairly consistent when you look at weekly averages: 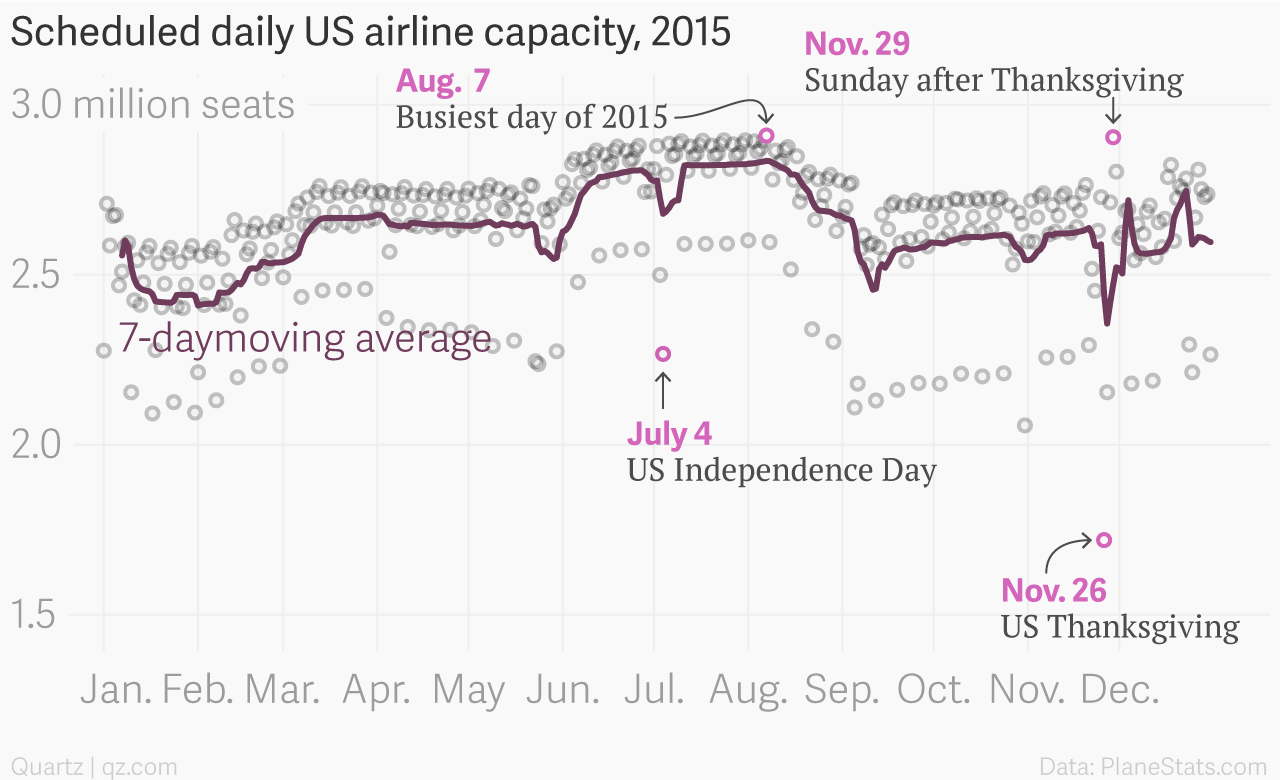 Is your holiday flight on one of these dates?

I just thought I’d suggest that the busiest period may well be during a chinese holiday.
For example there is a week-long public holiday* for chinese new year and a strong cultural imperative to travel to one’s hometown at this point. For about 300 million people that means traveling to another province.
Most such journeys are via train, but regardless there is a vast number of additional flights at this time.

Doubtful. Chinese airlines don’t have spare capacity that they bring out just for CNY. Instead, the prices just go up.

The utilization factor is likely to go up from 85% to 99% and deferring maintenance for the week will add a few more planes in the air but it’s likely that CNY is only ~30% busier than a normal high season day.

The same thing is true on US Thanksgiving. We don’t fly more than a tiny percent more flights than any other weekend in the 4th calendar quarter. We just have absolutely zero empty seats and extra passengers standing by eager to replace any no-shows.

LSL Guy, what about shuffling maintenance schedules to have more planes available (assuming this can be done safely)?

Doubtful. Chinese airlines don’t have spare capacity that they bring out just for CNY. Instead, the prices just go up.

The utilization factor is likely to go up from 85% to 99% and deferring maintenance for the week will add a few more planes in the air but it’s likely that CNY is only ~30% busier than a normal high season day.

Thanks, that’s an astonishing number. 1 out of every 8000 people.

If there’s 1,000,000 people airborne out of a population of 7.4 billion, that means that the average person spends 71 minutes per year airborne. I’m skeptical. Certainly, there are plenty of people who spend several hours per year airborne (mostly Americans and Europeans) but there’s bound to be billions more who’ve never set foot on an airplane and never will.

Speaking for myself, last year I spent a total of 6 hours airborne. But I’m an American. My experience can’t be typical. I find it hard to believe that my experience is only 5x higher than the global mean. Heck, even among Americans, there are plenty of people who never get on an airplane.

But then there are people who travel a lot–mostly people inthe richest nations, but people on all continents. Even the Antarctic crews spend many hours on planes.

I don’t travel a lot by my estimation, but my family of three makes at least one visit to the East Coast every year. Depending on routes, that’s 11-14 hours in the air for each of us. There are many people on planes frequently for their jobs, and even one long-haul flight for an infrequent traveler helps pull up the total and average.

After doing some more estimating, I think an average of 71 minutes airborne per person per year may be accurate after all.

Let’s imagine a random sample of 100 people taken from all over the world. Canadians, Americans, and Europeans, would be 15 people in this sample. Based on the Canadians, Americans, and Europeans that I know, I’d estimate that 5 of these 15 would never fly at all, 5 of them would fly about once a year, 4 would fly twice a year, and 1 would fly 6 times per year. That’s a total of 19 trips for these 15 people. If we assume 6 hours airborne per trip (3 hours each way), we’re up to 114 hours (7.6 hours per person, which matches my personal anecdote of 6 hours last year). Even if the other 85 people in our random sample never fly at all, that still gives us an average of 1.14 hours airborne per person per year, which is about 68 minutes. So yes, it’s quite possible that 71 minutes airborne per person per year really is the worldwide average.

Check out Wolfram Alpha. It’s a search and computation engine designed for odd questions like this.