I’m surprised no one has liked to this yet. 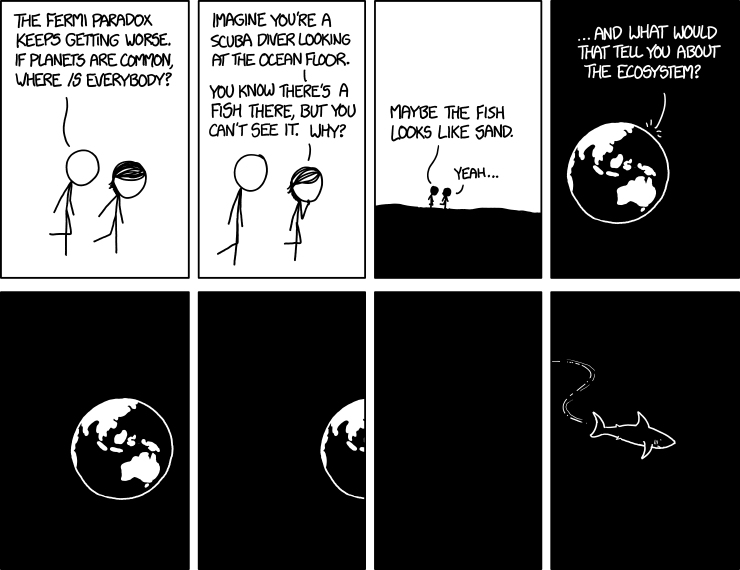 I’m surprised no one has liked to this yet.

So aliens see the Earth and know there is life there but they, um, don’t see it so um, just swim away because they are, um, really dumb and stuff.

No. Why do the “fish” look like sand? Because there’s something out there eating “fish” that stand out.

eh. Any species that thinks disguising itself as sand thinking more advanced species don’t know species disguise themselves as sand is…

Time to update the Drake Equation.

That Drake equation. Change a variable or two and get results from “are you kidding” to “intelligent life under every rock in the universe”.

I think Sagan even demonstrated this. Even in our own solar system Venus and Mars theoretically had a shot, but the variables just didn’t line up for them. I’ve seen it theorized that a whole slew of non-Drake variables had to line up for life as we know it to evolve on Earth - stuff as seemingly mundane as having our particular moon.

I’m confident there is life out there someplace - or has been/will be. Us knowing about them in our vanishlingly small window of opportunity makes it a lot less likely we’ll ever know about it.

It’s fun to think about, though.

Given that 88% of the star in this galaxy are Ms and Ks, it seems fairly likely that we would find some kind of life-supporting systems amongst them. They would have to be pretty oddball to develop LAWKI, but the probability of finding oddball stuff in space is about 1:1, if history is any kind of guide.

Well, here’s an appropriate thread to bump. I even started it four years ago.

Another planet discovered at Proxima. This one has about 6 times the mass of Earth, so they’re calling it a super-Earth.