This same story was posted a couple of days ago in another one of our threads here. To which there were immediately responses of “fake news!!1!!1!” by the usual suspects.

Is it fake? I have no idea. But I know which way to bet: it’s not fake.

This weekend my brother is hosting a big family get together to celebrate our grandfather’s 97th birthday.

And goodbye party, I assume.

One of my employees is primarily WFH but has to go into the office for a couple hours 1-2 times a week. Yesterday she told me another employee was told they had to quarantine for 14 days because one of their children tested positive. The other employee then went into the office to get things they needed to work from home for the next two weeks. DUH! What part of quarantine is not clear? And I really like this person quite a bit and thought they were fairly smart.

Is he, um, in the will or something?

I understand your point, but how was the employee supposed to get the things they need to do their job from home for two weeks? Assuming they were masked and were in and out of the building as quickly as possible, I would think the risk to others would be extremely small.

I don’t have COVID, but I got my office chair (as permitted) by having a coworker stick it outside the office door at the right time.

He is the one-and-only of dozens who has continued to work in the office. IT folks have gone in as necessary, but he’s been there almost the whole time. Don’t know how he finagled that privilege, but he’s been super-helpful whenever anybody needs a button pushed.

So in general it should be possible to get equipment safely and without spreading germs around.

My company takes COVID very seriously. Safety is our number 1 value. They should have asked their Supervisor what the expectation was for while they are in quarantine. We have a special time code that works like extra sick time. For the most part, there is no expectation for the employee to perform work. The Supervisor could have made the decision to have someone deliver the things needed contactless, have someone else perform the work during that period or just let it wait, if that is possible. It wasn’t the employee’s call to make. I appreciate their drive to keep up on their work, but our COVID policies are very specific. In general, no one is supposed to be in the office with authorization.

This. That’s how sound businesses and governments manage it. Quarantine means “Don’t leave your residence unless it’s on fire or you’re going to the hospital as a patient.” Nothing less.

Sadly, most Americans are so used to being screwed by sick leave policies that the idea of not driving to work with COVID to pick up their needed equipment and instead having the employer handle bringing it to them would never even occur to them to ask about.

Mask compliance has gotten even worse at my workplace, to the extent that the people who supposedly can’t wear a mask – and were thus issued face shields – have now taken to wearing the shield flipped up over their heads.

We’ve had four positive cases so far, all in departments with these maskholes.

We’ve been dealing with sloppy mask wearing all along, but it’s gotten worse. Yesterday I saw multiple people not wearing masks at all, which is new. Add to that the increased frequency of masks not covering the nose or even the mouth. I think some of these people are assuming the vaccine will roll out tomorrow and everyone will get it by Christmas, so why bother.

Can anyone help me find a resource to help me with a COVID semi-denier–that is, someone who knows COVID is real and bad but thinks it’s OK to go to a mask-free, non-socially-distanced church dinner because “We stand right next to each other every Sunday.” She also thinks the CDC is “asking too much,” as if the real issue is their rules as opposed to the virus that brooks no excuses. A website that explains clearly and powerfully why we need to stay home and not have contact with others not in our households would be most appreciated.

Boy, she sounds too deep in denial. If you could just convince her to hold out 2 more months…

She thinks I’m being overly cautious. When two of my doctors warned me early on to stay on lockdown even when it was lifted because I’m very high risk, she was angry at them for “scaring” me.

If I can’t find a good site, I may try to find a video of a COVID patient struggling to breathe–someone who’d been sure it was OK to get together with “just family” or “just people I know well.”

I don’t know if this will help but:

Although the Aragonez family is still healing after a COVID-19 outbreak, they took the time to make a public service announcement warning against large family gatherings.

Thanks for the responses and that wonderful video. This person’s state just went on a modified lockdown, so she won’t have many opportunities to be reckless. It’s sad that we have to have laws because people are so resistant to science and common sense.

My sister has appeared in this thread before. I nominate her again today because she and her family are spending the week in Orlando visiting Disney World, Epcot Center and Sea World. Because the thing you most need to do in an out of control pandemic is spend time with other folks from all over the country who also don’t give a shit about their fellow man or overwhelmed medical personnel. Actually, they are not so much idiots as self-centered assholes.

Not my story, but in my town. A local restaurant owner and covidiot par excellence made the news yesterday for allowing patrons into his BBQ restaurant in spite of a provincial lock down that allows curbside pick-up or deliveries only. 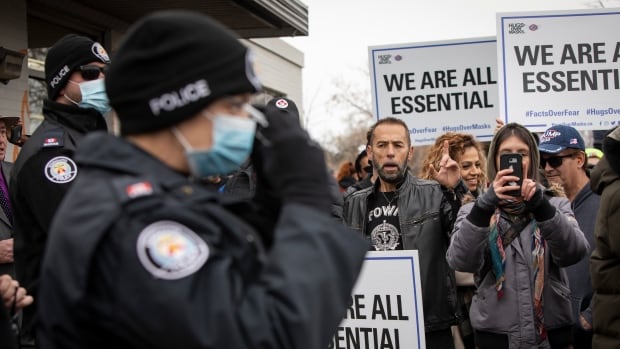 So today, after the locks were changed by the police on orders from the city health authorities, the owner was allowed limited access to the restaurant, then punched his way through a drywall partition and attempted to open up again. A crowd of supporters had gathered outside, one of whom proceeded to spit on police officers and utter threats as the owner was being led off in handcuffs. 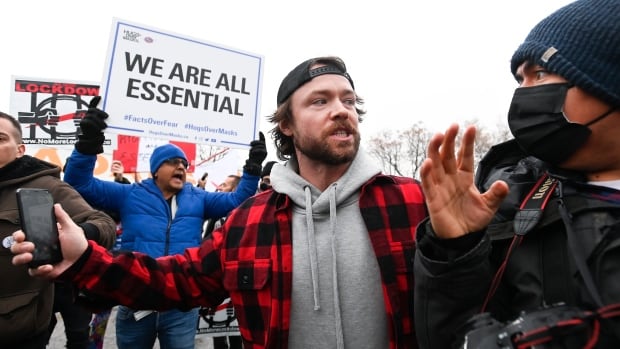 The owner of Adamson Barbecue, Adam Skelly, was taken away by police in handcuffs after violating indoor dining rules, holding an illegal gathering and operating a business without a licence. He was charged with a total of 13 offences.

The police had some mounted officers that they used for crowd control, I haven’t heard any reports of injuries. Some of the protesters had signs saying “We Are All Essential”, so somebody put some effort into the protest. I hope that whoever else was involved in planning this gets investigated, an charged if appropriate.

I like some barbecue as much as the next guy, but seriously?

My sister has appeared in this thread before. I nominate her again today because she and her family are spending the week in Orlando visiting Disney World, Epcot Center and Sea World. Because the thing you most need to do in an out of control pandemic is spend time with other folks from all over the country who also don’t give a shit about their fellow man or overwhelmed medical personnel. Actually, they are not so much idiots as self-centered assholes.

I support this nomination. And I say that as someone who absolutely loves Disney. My family and I have been to Walt Disney World (WDW) a dozen times over the last decade or so (plus numerous Disney cruises). As I type this we are watching the Disney Holiday Celebration on TV.

And yet I wouldn’t dream of going to WDW this year.

(A minor nitpick: Epcot is actually one of the four major parks within Walt Disney World. Also, it’s just Epcot now. It hasn’t been EPCOT Center since 1994.)