So which fictional vigilante hero would be plausible?

That’s not Robin Hood, except in the loosest metaphorical sense. To be true to the fictional/legendary character, a modern Robin Hood would physically steal physical currency from the IRS, and redistribute that to the poor, while dodging the local district U.S. Marshal. And he’d be an expert rifle marksman. And hide out in the woods. If you wanted to stretch it a bit, he’d rob banks and armored cars. Oh, and, of course, he’d be fighting on behalf of the oppressed “native” “peasantry” against a “foreign” “aristocracy” (where the “natives” themselves are late transplants that displaced earlier peoples).

So, actually, pretty realistic. If you consider groups like The Covenant, the Sword, and the Arm of Lord to be heroic vigilantes.

How about Charles Bronson in Death Wish? Still unrealistic, but less so than most.

Tom Clancy’s “Mr Clark” in Without Remorse. A former SEAL who earns tons of money as an independent UD contractor and uses it to hunt down drug dealers and assassinate traitors in his bountiful free time.

So what if he fucks up and eventually gets caught? Everything turns out right in the end, thanks to the CIA!

Few vigilantes are implausibler that Batman. The cops would hate his guts for spoiling crime scenes and operating without the constraints they suffer under. He’d never be able to testify in court, so unless the guy was already wanted for something, his captures would walk. And how could the batmobile access the secret entrance to the Batcave without anyone ever seeing it? And swinging around on ropes? If he’s shooting anchors into nearby buildings, those buildings’ owners are going to be pissed. Here’s a crazy one: Gordon summons him with the bat signal. He and Robin come swinging in from somewhere. Did they park outside the building across the street, and then take an elevator to the roof, just so they could swing across? Surely they didn’t climb up the outside of the building. And their ropes are attached to what exactly? I could go on

The Spirit really took the silly notion that a domino mask could conceal your identity to the extreme.

It wasn’t for concealing. He didn’t need to conceal his identity, since he was the Spirit full-time. It was there to identify him as the Spirit.

I never watched more than a few episodes, but manga hero Golgo 13 was a “noble” assassin who was an incredibly good sniper, so pretty much everyone he killed was through a snipers scope. I can see a sniper being able to do vigilante stuff far more easily for obvious reasons.

Not the pulp magazine version. He had no powers at all, just a couple of automatics, a bandana, a slouch hat and a nose. 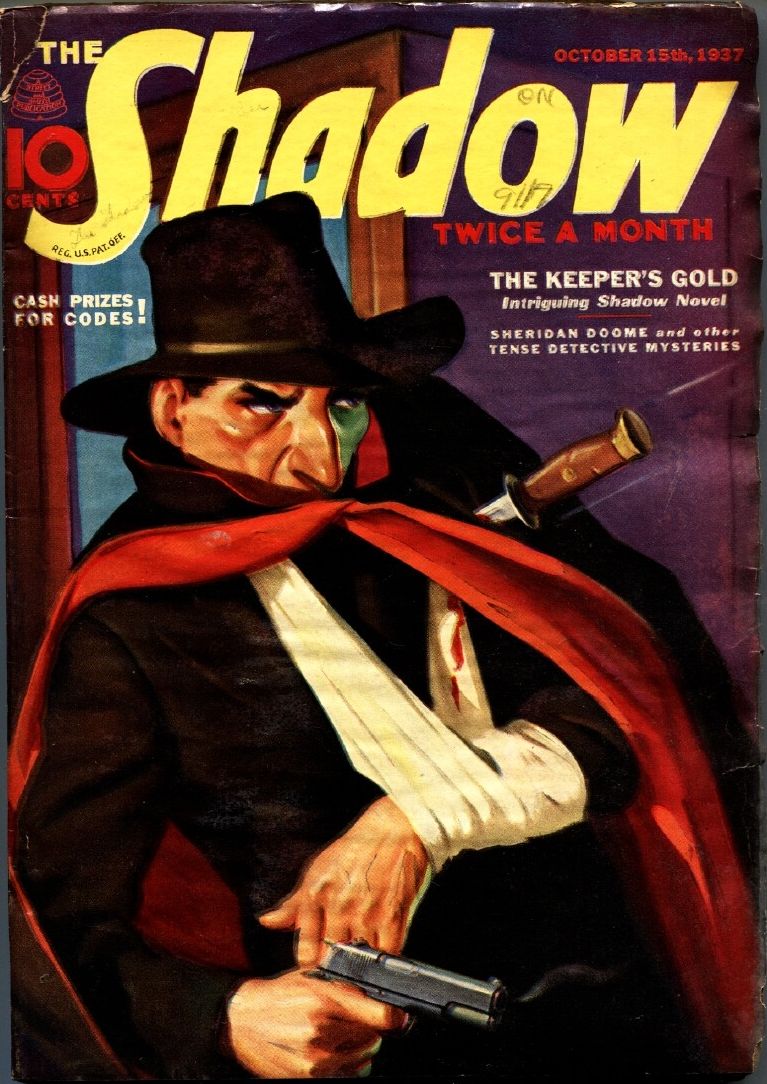 And all this time I thought it was the Shadow “knows”.

Of all the fictional characters suggested so far, I think the Will Eisner’s The Spirit is probably the best one. He’s basically just a noir detective who happens to wear a mask. The basic idea of a former police detective who maintains contacts in the department and cracks cases that the police haven’t through sheer dogged determination is fairly realistic. It even happens in real life on occasion.

The issue with Death Wish and other films and comics like that is finding the bad guys.

What do you do, walk down a dark alley hoping to get mugged?

Of course, sometimes a criminal 'gets off on a technicality" or the DA drop that case since the witnesses are turn up dead. The vigilante can look them up, assume they really are guilty and assassinate them. You are then “judge jury and executioner”- and maybe wrong sometimes.

A ridiculously high crime rate is a given in comics, and even mysteries (who would want to live in Cabot Cove?). I used to do a bit with Batman lurking in an alley, ready to swoop down on a mugger dramatically and getting increasingly pissed as the night dragged on and no crime happened.
There’s an obscure hero from Marvel called “The Witness”. His “power” is that he is occasionally drawn to the scene of a crime. That’s it. He witnesses the crime, and the rest is up to him. When you think about it, it’s much more useful for crime fighting than most superpowers.

The issue with Death Wish and other films and comics like that is finding the bad guys.

What do you do, walk down a dark alley hoping to get mugged?

In the first Death Wish movie that was exactly what happened. It was supposed to be a commentary on how shitty NYC was in the early 1970s that walking alone at night in the seedier parts of town looking helpless and vulnerable would virtually guarantee that you’d be attacked.

An obscure character who fits is Jimmy Dale, who was a precursor of Batman* who was a master locksmith would would break into houses to gain evidence and bring criminals to justice.

*I’ve never seen him mentioned as such, but there were too many parallels, as well as connections to the original Shadow. Dale was a rich playboy and, most interestingly, a master of disguise, one of which was called “The Bat.” He also had a secret sanctuary where he planned his actions, not unlike the Batcave (though it was a hotel room the Bat rented permanently). Like the Shadow, he wore a slouch hat. The series was still coming out with new installments when Bob Kane was a boy.

With training, tech, time to rest between missions, & a large organization to give him backup–he’s work OK.

The series was still coming out with new installments when Bob Kane was a boy.

That may be, but the more pertinent question is, “Were they still coming out when Bill Finger was a boy?”

An obscure character who fits is Jimmy Dale, who was a precursor of Batman* who was a master locksmith would would break into houses to gain evidence and bring criminals to justice.

Is there another Remo Williams?