Opinion | Six things we can already tell about the Biden administration

You don't need to sacrifice experience to get diversity — and other lessons.

To begin, the senior members of Biden’s White House who have already been announced are both remarkably experienced in federal government and with Biden specifically (e.g., Ron Klain, Mike Donilon). They are also diverse (five of the first nine are women). This is no surprise, given CNN’s report that on the transition team “41% of the senior staff are people of color. The majority of transition staff — 52% — are women, and 53% of the senior staff are women.”
…

Third, traditional and bipartisan foreign policy seems to be the order of the day. Biden’s readouts of calls with foreign leaders seem like messages from a time capsule buried at Foggy Bottom before the Trump presidency.
…

Fifth, we do not hear from Biden every day.
…

Finally, Biden absorbs rather than magnifies chaos and conflict. He does not condemn Republicans for playing along with Trump’s delusional insistence that he won the election. Nor does he excoriate Republicans for foot-dragging since the House passed its bill in May ; instead, he talks to Democratic leaders about a lame-duck stimulus. His lawyers and staff can punch back as necessary, but he is trying his best not to personalize disputes with members of Congress. He knows that in a matter of weeks, he will need their help.
…

Jim Jordan and others are already calling for investigations… they’re gonna try and benghazi this shit. 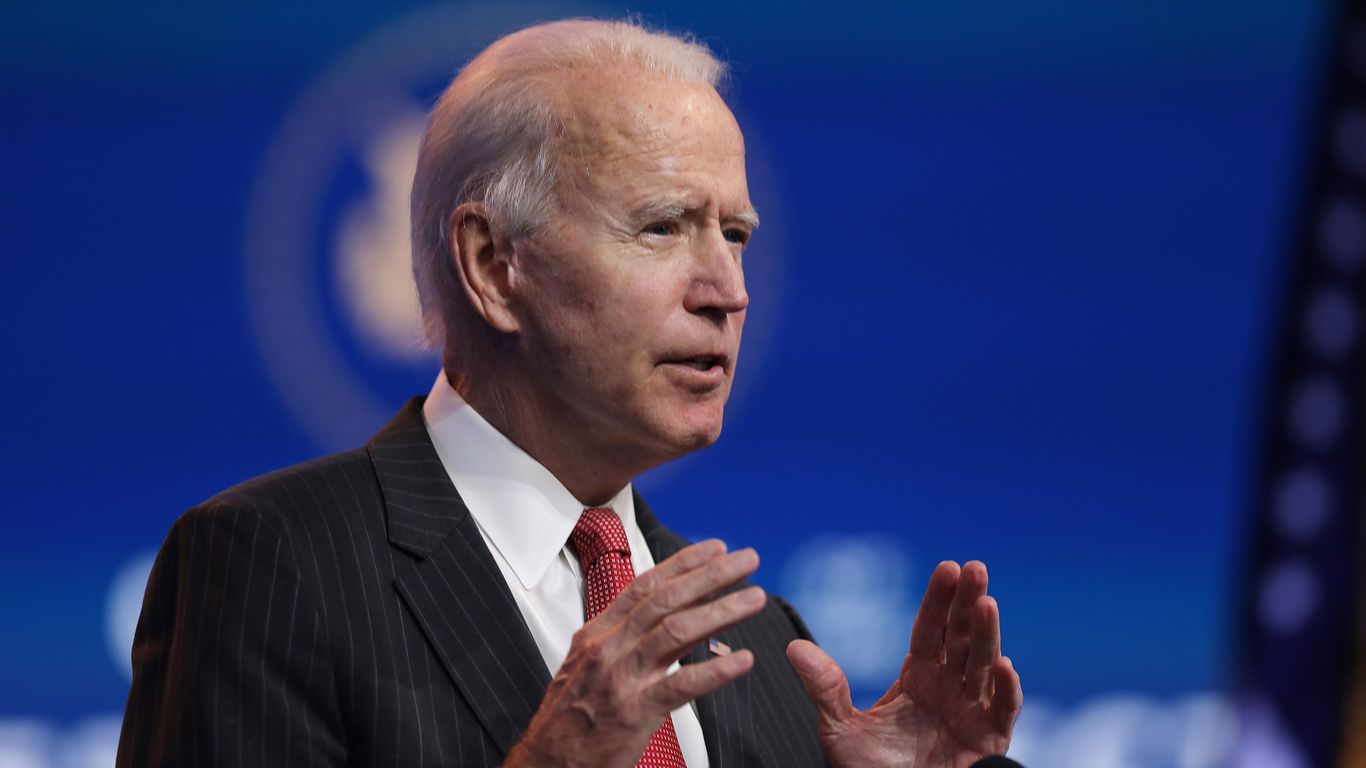 Biden's picks for positions of true power are dull by design

Biden is obsessed with bringing stability and conventional sanity back to governance.

The most remarkable part of President-elect Biden’s campaign and early picks for positions of true power is the unremarkable — and predictable — nature of his big moves.

Why it matters: Biden is obsessed with bringing stability and conventional sanity back to governance. “He is approaching this — in part — like an experienced mechanic intent on repairing something that’s been badly broken,” said one source familiar with the president-elect’s thinking.

The picks — including Tony Blinken for secretary of state, which leaked last night and is to be announced tomorrow — fit with Biden’s penchant for sticking to comfort foods when it comes to people, policies and political techniques.

Other longtime Biden hands on the new White House team:

I predict plenty of people, Democrats as well as Republicans, will be screaming for “new blood” and accusing Biden of “refilling the swamp”! As for me, the descriptors dull, reliable, predictable, experienced, longtime, “conventional sanity” are music to my ears.

Joe Biden plans to nominate the former Federal Reserve chair as his Treasury Secretary. She would play a leading role in helping the economy recover from the pandemic.

No more honeymoon. Not even a pretend one.

Let’s cool it a bit – Reed hasn’t been nominated for anything.

I don’t always agree with AOC and Omar, but I sincerely hope that the takeaway from the past election cycle is not that Democrats should run away from progressive politics - they need to be as stridently progressive as ever, It’s how to market that brand and what individual progressive ‘products’ they’re selling that matters.

I think Biden needs to sell the country on expanding the welfare state, and I can’t imagine how that would be remotely challenging. My view is that progressives need to drop the “democratic socialist” label and switch it out with “social capitalist” instead. But if Biden and moderates are timid and afraid to market progressive economic policies, they’re not going to succeed. I don’t believe in free tuition for all or across the board $15/hour minimum wages, either, but Biden and moderates can’t just use progressives and not give them something to believe in.

Trying to figure out if Nancy’s talking to AOC, et al, to bring them around to this current Biden cabinet, or, the other way around - to Biden, about them.
They’re happy with most cabinet positions, but with Bruce Reed’s support of medicare and social security cuts in the past, do they at least have a case with him?

Saw one commentor elsewhere who said they wanted to see Biden get inaugurated in a tan suit. Seconded!

Geez fucking Louise. Did I mention no honeymoon? I don’t think this deserves its own thread, but I want to note the story for the record:

The Biden Presidency Already Has Its First Conspiracy Theory: The Great Reset

Usually, you become president before the crazy starts. But Biden still has weeks to go till he assumes office.

Joe Biden isn’t president yet. But his incoming White House already has its first conspiracy theory to deal with.

It goes by the tag the “Great Reset” and under its construct a wild dystopian future is in store. The coronavirus pandemic is merely a means to enslave humanity and end capitalism. Biden’s “Build Back Better” slogan is really a cover for nefarious plotting of a global cabal from Davos, Switzerland, intent on abolishing private property and building prison camps for the dissenters who refuse to accept microchips that will read their thoughts. Even Grover from Sesame Street might be involved.

The Great Reset is a hodgepodge of one-world-government fears that has gained steam in the wake of Biden’s win. It’s been fed by right-wing media personalities who have told their audiences that Biden is bent on launching said reset by using the coronavirus pandemic to ban religion, crush small businesses, and turn humans into something like robots—or replace them with actual robots.

Former Trump adviser Steve Bannon has declared that the Great Reset is “up in your grill,” while talk radio host Glenn Beck said the Great Reset is a plot to institute Nazi-style restrictions on American citizens. WorldNetDaily has called it a scheme from our “globalist overlords.” Pro-Trump personalities “Diamond and Silk” have warned their audience on Newsmax TV that Biden is behind the Great Reset plot.

Fox News hosts Tucker Carlson and Laura Ingraham have also promoted the idea that Biden is a key player in a nefarious movement dubbed the Great Reset.

“His handlers, who are basically all old Obama staffers, believe in something called the Great Reset of capitalism,” Ingraham said in a November episode of her show. “It’s a plan to force a more equitable distribution of global resources.”
…

Switzerland? You mean The Jews aren’t behind it? Not surprised to see Steve Bannon surfing the sewage. This smells a lot like the New World Order BS from decades ago.

Switzerland? You mean The Jews aren’t behind it?

What’re the Swiss famous for? Yeah, “numbered Swiss bank accounts”. And who controls all the banks?

Mind you, that’s the way CT’s minds work. As you say, it’s just a sewer there.

The path to confirmation for Biden's nominees remains unclear as control of the Senate will be decided by two runoff elections in Georgia early next year.

President-elect Joe Biden pushed the Senate on Tuesday to begin confirmation hearings for his Cabinet selections in the coming weeks, a process that could put at least some leaders of the incoming administration in position to assume their roles on Inauguration Day.

"I hope these outstanding nominees received a prompt hearing, and that we can work across the aisle in good faith to move forward for the country,” Biden said Tuesday. “Let’s begin that work to heal and unite, to heal and unite America as well as the world.”

I’m sure Mitch laughed his ass off when he heard that and whispered, “Fat chance!” Since he still hasn’t said a word about Biden’s election.

Biden and his transition team this week rolled out the names of his top national security staff, as well as nominees for secretary of state and ambassador to the United Nations. The president-elect held a press event Tuesday at his home base in Wilmington, Del., to introduce the nominees.

“To the American people, this team will make us proud to be Americans,” Biden said.

The path to confirmation for Biden’s nominees remains unclear as control of the Senate will be decided by two runoff elections in Georgia early next year. Senate Republicans thus far have exerted considerable caution not to run afoul of President Donald Trump’s unfounded claims of election fraud by acknowledging Biden’s victory. Still, lawmakers including Sens. Lindsey Graham (R-S.C.), Susan Collins (R-Maine) and Lisa Murkowski (R-Alaska) have all suggested that the incoming president is entitled to a cabinet.
…

That’s pretty radical talk! The President entitled to a Cabinet? A Democrat President??

Seriously, what do y’all think? Is the Senate, under Mitch’s recalcitrant (so-called) leadership going to stonewall/ignore Biden’s Cabinet confirmations? -

If I remember, all three engage in furrowed brows before caving in to The Turtle’s orders.

Something more cheerful than Mitch McConnell:

Joe and Jill Biden want to unite America. They'll start by adding a cat to...

Joe and Jill Biden will bring a cat to the White House it was revealed Sunday. The unrevealed feline will join German Shepherds Champ and Major.

I understand that Champ and Major are Republicans, though, so Toonces will face getting stonewalled to its food and stuff.

If anyone can get Unca Mitch to play (not saying play nice , but just to show up at the game), I’ll bet Joe can do it.

Not to mention, Joe knows where all the skeletons are buried, and what Senator needs what sort of Pork Barrel and many owe him favors too.

Obama had only been in the Senate for a few years.

I think it’d be counterproductive to stonewall cabinet picks across the board; the president is clearly going to wind up calling the shots at those departments anyway, so why not (a) make a big show of come-let-us-reason-together bipartisan compromise there so as to (b) have the optics be that much better when the Senate stonewalls various judicial picks?

I dont think so, maybe if one is very controversial. they will save that for SCOTUS.

They may not be geniuses, but they are probably smarter than that.

They will instead stonewall his legislative proposals.

This is true even if the Democrats win those Georgia seats. No way there will be 50 votes to end the filibuster, so the GOP can still stop Biden’s proposals.

Not to mention, Joe knows where all the skeletons are buried, and what Senator needs what sort of Pork Barrel and many owe him favors too.

Obama had only been in the Senate for a few years.

It’s not that Obama lacked knowledge. After all, by your logic, all Barack had to do was ask Joe.

Because of a subtle change in public opinion, the Democrats may be able to bring back earmarks. If I am correct there, pork barrel may return for a different reason.