How did she know it provided no danger to anyone? Or to any public property?

Because it’s basically it’s no different than any other stabilized approach. If I compared it to an airport with power lines near the end of the runway it’s a far safer flight.

What’s the effect of taking away all hours?

This is the sort of thing you do on your last flight before you retire or in a video game.

No argument there. There are motorcyclists who routinely travel in excess of 150 mph. More is expected of pilots.

What’s the effect of taking away all hours?

AIUI, all of the hours she’s logged no longer count. In order to be a pilot again she would have to take ground school and pass the written test. She’d have to receive 40 hours of training (20 dual, 20 solo) and pass a check ride to earn her Private Pilot Certificate. She would have to repeat the process for her Instrument rating, Commercial rating, CFI, CFII, type ratings, ATP, etc. I could see this easily costing seven figures.

She screwed the pooch. But the penalty seems excessive to me.

The trick with flying under a bridge is making sure no one sees you do it, which means an unpopulated area where the bridges tend to be small. Then the trick becomes making sure you don’t clip the bridge.

She should use whatever legal defense Senator Inhofe used when he landed on a closed runway and almost killed some people. He’s still flying.

There are motorcyclists who routinely travel in excess of 150 mph.

Oddly the people racing them wear helmets. They fall into 2 categories, sprinters and racers. Sprinters will make a quick run by themselves on a deserted highway and shut it down. Racers will race in packs and are just flat out crazy. I’ve had them blow by me like I’m standing still and I’m no slow poke on a motorcycle.

She should use whatever legal defense Senator Inhofe used when he landed on a closed runway and almost killed some people. He’s still flying.

Agree that would be the ideal tactic.

The challenge will be installing “Senator” on the front of her name between now and the start of the hearing.

Oddly the people racing them wear helmets. They fall into 2 categories, sprinters and racers. Sprinters will make a quick run by themselves on a deserted highway and shut it down. Racers will race in packs and are just flat out crazy. I’ve had them blow by me like I’m standing still and I’m no slow poke on a motorcycle.

Yeah, the thing is that they are racing on public roads. Unless they are walking that road in advance, looking for potholes, gravel, hedge clippings, roadkill, or whatever, they’re playing Russian roulette. It doesn’t take much to drop a bike at those speeds. I just read about an accident where some guy mowed grass on the side of the road and blew the clippings into the road. The next bike that came along went down the second they hit it. They said it was like ice.

Do that at 150 mph without crash barriers, and…

You can be a great biker with a great bike, but if you are travelling at those kinds of speeds in an uncontrolled environment you’re riskkng your life that nothing happens you didn’t have time to react to or simply couldn’t avoid.

For those who’ve always wanted to run their own airline on the cheap:

Pan Am Board Game-Historic Aviation

So I just came across this story today.

What would have to go wrong for that to happen? I assume if the door hadn’t been closed properly in the first place the pilots would have gotten a warning before takeoff. But I understand those door latches are pretty complicated, and a lot would have to break before the door could open on its own, right?

And you’re right, there’s a warning light in the cockpit if the door isn’t latched properly. It can be a big deal to have a door come open and depressurize a plane. a DC-10 crashed because of this.

Not much to add to @Magiver’s summary. A properly closed & latched cargo door shouldn’t open in flight. An improperly latched door should show a cockpit indication.

It’s pretty clear more than one mechanical and/or procedural thing must have gone wrong. Skywest is a reputable operator but we have no idea about what company is contracted to do the ground handling at Wilkes-Barre.

Some airplanes have a net that goes across the door opening so even if the door magically disappeared the contents would be retained onboard. Others do not. I don’t have any personal knowledge or source for documentation on CRJs.

I don’t know much about the CRJ either.

On warning systems. They don’t always warn of the status that you may think they do. For example the original DC10 cargo door latches could be forced closed in a way that would extinguish the warning but still leave the door improperly latched. 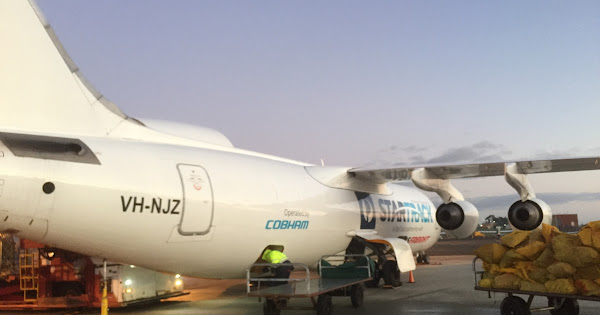 It shouldn’t happen but weaknesses in procedure and design often aren’t picked up until Murphy strikes with a perfect storm of latent conditions compounding human error.

it would be easy to miss the tail stand on a BAe 146. It’s so small. makes me wonder if it would stabilize in the slipstream and go unnoticed in flight.

I can’t remember how much movement it has when it is installed. I’d assumed it would get damaged during rotation for takeoff, possibly breaking away.

One of the sources of weather information I used when flying was Radar Summary. It gives you thunderstorm tops, wind speed, rotating cells etc… I still use it when checkng on weather. It’s a quick way to see really bad weather formations…

Tonight there’s a long front going through Alabama and Georgia with tops of 65,000 feet. It takes a great deal of energy to push a storm cell to that altitude. A “normal” bad storm cell might hit 45,000 feet. I would expect a number of tornadoes to come out of this and it will occur at night when people are asleep. This has the potential of killing a bunch of people.

I spent Tue night in downtown ATL. No issues arriving, but that was 11am-ish Tue.

Lots of lightning in evening through wee hours. But nothing very vicious in terms of wind or rainfall rate.

Terry Virts in his book How to Astronaut (which I’m really enjoying) mentions spending a lot of time avoiding thunderstorms in the South as both an Air Force fighter pilot and a NASA Space Shuttle pilot trainee. He also wrote, “I’d rather be lucky than good.”

Lots of lightning in evening through wee hours. But nothing very vicious in terms of wind or rainfall rate.

I was watching it. It weekend going into Georgia.

He also wrote, “I’d rather be lucky than good.”