Why don’t more twin engine propeller planes use counter-rotating propellers (each spins in a different direction)? It would seem a minor engineering issue (add a reversing gear or have the engines built to spin in different directions). I would think the benefits to torque on the plane (and P-factor) would be worth the extra effort but apparently not. There seem to be plenty of twins that don’t do this.

A reversing gear is an added hunk of metal and engineering expense and require a different starter arrangement.

You’re essentially creating a certifying 2 engines. It adds greatly to the cost of the plane.

A bit of useless trivia. The counter rotating F-82 Twin Mustang had to switch the direction of rotation on both engines because the original design negated lift on the center wing. 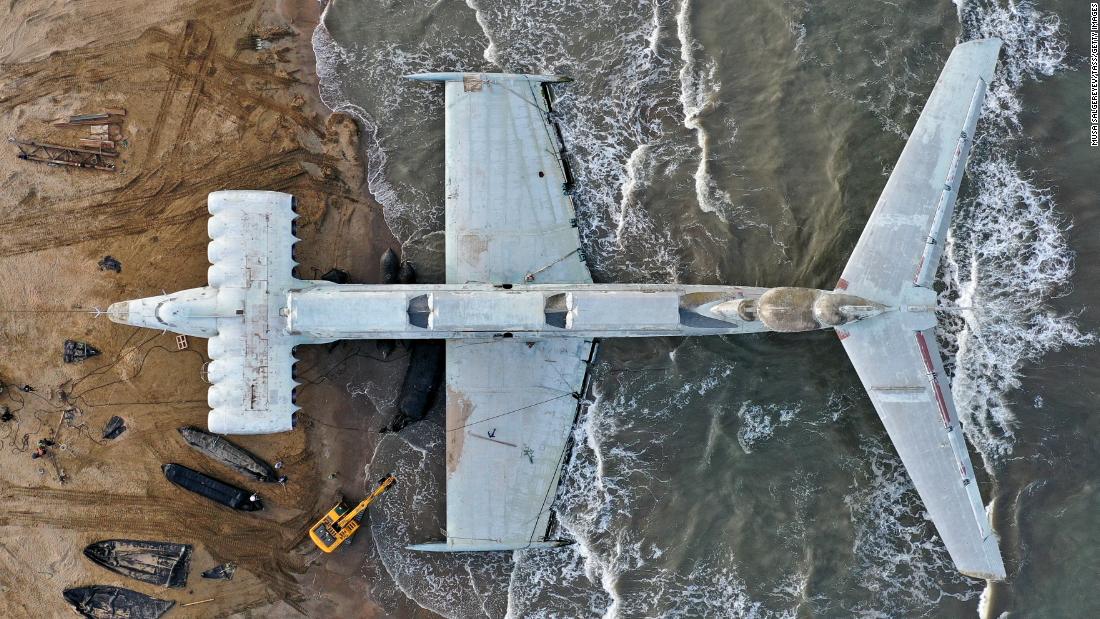 See photos of the Lun-class Ekranoplan from the Soviet era. Also known as the "Caspian Sea Monster," it was in some ways ahead of its time.

Why don’t more twin engine propeller planes use counter-rotating propellers (each spins in a different direction)?

You’re right they’re by far the exception as to GA airplanes and are mostly unheard of in larger engines / aircraft. I’ll fill in that “mostly” later.

Partly it’s history. Multiengine airplanes date back to the very early days. As such, the early engines all turned the same way and torque, etc., is just what it was.

Once somebody decided to invent counter-rotating engines, the usual way for ICEs is not with a reversing transmission. Instead you grind the camshaft as a mirror image of the normal, rewire the starter motor to turn the other way and viola! The engine runs the the other way. There’s a few more details, like oil pump impellers & distributor timing, but the basics are only a couple of key parts need to be swapped out and there’s no extra weight. Of course the prop also needs a bunch of mirror imaging as well.

Big Picture, the benefit of counterrotating engines is two-fold: with both engines running there’s no net torque and P-factor. And with one failed there’s not a more critical and less critical engine.

The latter was the big motivation for the few light twins that have counter-rotating engines. The Vmc we’ve talked so much about is computed for the worst of the two engines. Changing the worst engine to rotate the other way can save ~5mph of Vmc which in turn leads to better book take off and landing distances, speeds, rates of climb, etc.

At the time in the late 60s when GA was booming, light twins were developing a real bad rep from takeoff Vmc accidents. With the Twin Comanche being the wosrt offender. It’s not a coincidence that that model was one of the first c/r light twins as Piper tried everything to clean up that reputation.

Cessna took a different tack with the 336/337 Skymaster to eliminate Vmc problems seen in the 310/320. That also didn’t work very well; the Vmc problem was comprehensively solved, but at a terrible cost to performance = speed, climb rate, payload, and, yes, single engine performance once you got everything squared away.

The WWII Lockheed P-38 was one of the first counter-rotating engine airplanes. They did that mostly for balanced torque/P-factor and maneuverability as a fighter, not for Vmc. Funny enough, the early P-38’s engines counterrotated in the way that both engines were the worst case Vmc in the event of an engine failure. In the next iteration they changed which engine turned which way so both were best-case for Vmc.

Interestingly the original Wright Flyer from 1903 had a single engine but had contrarotating props. The Wright Brothers saw the torque issue from Day One. If you look closely at any picture taken from the rear you’ll see two long bicycle chains running to the props. One has a half-twist along the way and one does not. That’s the “reversing gear” right there in plain sight.

Turboprops all have reduction gearboxes; turbines turn vary fast & props turn very slowly, so there’s no esacaping the need for a gearbox. For a counter-rotating model there will be an extra idler gear in there to reverse the prop rotation. Building a complete gas turbine to turn the other way would be a lot of extra cost and massive numbers of differently-handed parts; far more than just a camshaft and couple accesory tidbits.

The Airbus A400M is interesting because they put counter-rotating props on each wing. The inboards are mirror-imaged and the outboards are also mirror-imaged, but in the opposite direction. So each wing has one of each. The cited wiki has a paragraph or two on the rationale for this. AFAIK this is the only such airplane ever built.

Cool that they’re moving it and it may rise again.

There’s a lot of interesting vids on the topic here:
https://www.youtube.com/results?search_query=ekranoplan+lun

And some cool pix here:

Belly Of The Beast: Illicit Photos From Inside The Soviet Ekranoplan

A Russian photographer snuck into the world’s only nuclear-capable, ground-effect vehicle and captured rare images of its interior.

Take A Look At These Incredible Shots Of The Russia’s Sole Completed...


This last one seems to demand an email address to dismiss the nag screen. Not really; just leave the email box blank & click the dimmed {Next} at upper right and you’re in.

Interiors of the abandoned Lun ekranoplan

You can look at it from the outside in this post. Let's climb inside this ship/plane.The entrance. There is a massive bitt right near the door for various flotation devices. Near the same door there are fire-extinguishing appliances (have you seen...

Why do (some) runways have a displaced threshold?

Not sure what else to say about this except why bother paving a few hundred feet of runway that is not meant to be used?

So why “displaced”? Why not just runway you can use?

Typically a displaced threshold is an afterthought.

The runway gets built. Then the trees prior to the runway grow taller and can’t be removed since they don’t belong to the airport. Or somebody builds a tall-ish building too close to the arrival end of the runway. The FAA has ZERO veto over construction near the airport. They can recommend, but not enforce.

The result is airplanes need to be higher during approach to have legal spacing over the obstacles. That has the effect of making them land partway down the runway. So a new threshold is painted where the new higher arrival path intersects the pavement.


The opposite situation is what Johnny was alluding to.

Say the airport builds the runways and they finish with some generous margins from the runway end to the airport boundary to allow for the inevitable future taller trees and buildings. Then those things don’t happen. But at the same time, larger airplanes needing longer runways start using the airport.

They can extend the departure end of the runway closer to the boundary to create more takeoff room. But perhaps they can’t move the touchdown point of the same pavement going the other way due to obstacles, instrument approach procedures already designed, ILS antennas installed, etc.


There’s also a bad way. Of course. Which happened / is happening to a lot of smaller GA fields.

The airport is built on farmland in the 1950s. By the 1970s suburbia has surrounded the airport and neighbors are complaining about noise and low-flying airplanes. One legitimate way to reduce the noise & lowness is to displace the threshold so every airplane is higher at every point along the approach / landing.

The ulterior motive is to shorten the runway making the airport incrementally less welcoming to all airplanes.

The biggest fastest airplanes there (maybe just a 310) now can’t comfortably use the now shorter runway. So they move to another airport. The nearby residents are emboldened and ask for more displacement. After 2 or 3 iterations nothing but Piper Cubs can get in and out of the mini runway, the usage numbers dwindle, the businesses that depend on the flying go out of business, and the political reason to keep the airport at all just evaporates.

Then the airport is closed and the land is converted to more suburbia; be that houses or tilt-up light industry / commerce.

About half the airports I grew up flying into & out of in SoCal, an aviation Mecca then and now, do not exist today. They each got whittled down this way at least once, usually twice or three times, before disappearing under the bulldozers.

Og save me - my husband is intending to buy a BushCat kit to build for himself.
Can you say moneypit? Yes, I knew you could!

Seriously, if it makes him happy I’m ok with it, but … omg that’s a chunk o’ change that’s going to be sitting in the garage for a long, long time. (We’ve been together almost 40 years. I know his habits … )

What happened with the Tri-Pacer? Didn’t it whack him once?

However many owner work-hours the kit company says it’ll take, multiply by 3. The dollars only multiply by 2, so you’re good to go there.

Anyhow, after you have the hours, assume no more than about 2 work-hours per week. Tops. My Dad was a go-getter, but I grew up with airplanes not cars in our garage. He was a licensed A&P mechanic and these were just rebuilds of factory models. So he already had the skills and the work was not nearly the voyage of discovery involved in amateurs doing a new-build. Still the pace of progress was glacial bordering on tectonic.

I can’t quite say I feel your pain, but I can sure recognize it!

You remembered that! Yep, his Tri-Pacer put a 7" gash in his skull. But, he still has it and loves it, he’s just tired of the random FAA bullshit about working on it. He’s also looking for something that can land on a very short grass strip (ie: my horse pasture - and that’s DEFINITELY still under discussion! :p) And possibly something he can actually haul to airshows that are further than he can fly to in a small plane.

It’s kind of a neat looking little beast, actually (says the person who will NOT go up in a tiny plane).

I bet we all do. It’s a small flying club here and Dave’s accident made a big impression. Lest we forget:

General Aviation folk, I need your help again ~ In My Humble Opinion (IMHO)

I hope you clever people can help me reconstruct the chain of events. I’ll try to be succinct, but I’m a little stressed… Short version is that some truly good guys found my husband sitting by his plane with a great gash in his skull, blood on the ground in front of the plane, and the plane not running but with the magnetos on. The plane is a 1956 Piper Tri-Pacer. The assumption is that he took a single prop blow to the head, but I don’t know enough about planes or engines to understand how it…

I’m constantly amazed that he survived that with very few lasting effects. He really is just fine!

I didn’t know anything about a Bushcat before your post but spent awhile poking around on their site. It sounds like a machine with a lot of built-in fun. Good for you both!

Not 100% sure, but probably tricycle because thats what he’s most familiar with.