ust to be a nitpicky pain…pusher prop in the back?

Or engines on the tail?

Or behind you integral to the

Someone actually built a twin engine, pusher prop, tandem seat plane with minimum instruments for the express purpose of visibility. it was commissioned for National Geographic and it was such a nice plane the put it into production. The Air Cam.

I’ve flown in it. It is remarkably fun airplane.

there are a handful of planes that follow this concept. A Long-EZ is a faster example but the small cockpit comes at a price. The pilot is shoehorned into the plane and there isn’t much real-estate for gauges. Luggage is what you’re wearing.

Putting aside the pusher prop concept or engines on the wings we’re still left with a fuselage that has to accommodate side by side cockpits for the vast majority of planes. While you gain some aerodynamic qualities moving the engine/prop away from the front of the cockpit it still has to taper up to conform to the space needed for pilots. And that still leaves the space needed for radios, transponders and gauges.

What has changed in recent years is the glass cockpit. That allows a savings of space in 2 ways. It allows the relocation of bulk equipment to other parts of the plane and it allows a reduction of gauges through digital displays. It is no long necessary to take up 3 inches for a volt meter or ammeter or any other measuring device when all those gauges can be replaced by a digital display that takes up a fraction of the space. You can now display every monitoring gauge on a single panel that’s 4" square. Navigation and radio can be displayed on an i pad sized unit. All the supporting equipment can be located anywhere in the plane that has space. That’s the future of visibility.

The Edgley EA-7 Optica is a British light aircraft designed for low-speed observation work, and intended as a low-cost alternative to helicopters. The Optica has a loiter speed of 130 km/h (70 kn; 81 mph) and a stall speed of 108 km/h (58 kn; 67 mph). The Optica project began in 1974 with a company, Edgley Aircraft Limited, formed by John Edgley who, with a small team, designed and built the original prototype. In 1982, institutional investors bought into the project and set up a production li...

The aircraft has an unusual configuration with a fully glazed forward cabin, reminiscent of an Alouette helicopter, that provides 270° panoramic vision and almost vertical downward vision for the pilot and two passengers.

The bottom line is that all else equal, more pilot visibility outside is better than less. But when all else is not equal, it becomes just one more variable in the trade space. Usually, you’ll get as much as can be given without excessively sacrificing something even more valuable.

In the case of Richard’s Pitts, they started with a biplane as a given and did the best they could. This airplane is 30 years newer and generally considered the “replacement” for the Pitts & similar designs on the airshow circuit. And has truly spectacular visibility. Except, like all taildraggers, while taxiing and some parts of the takeoff and landing roll.

The Extra Flugzeugbau EA300 is a two-seat aerobatic monoplane capable of Unlimited category competition. It was designed in 1987 by Walter Extra, a German aerobatic pilot, and built by Extra Flugzeugbau. Design of the Extra 300 was based on the Extra 230, an early 1980s monoplane having a wing made of wood. The Extra 300 has a welded steel tube fuselage covered in aluminium and fabric. The midset wing has a carbon fiber composite spar and carbon composite skins. A symmetrical airfoil, mounted wi...


Heck, even your basic Cessna 172 and Piper Cherokee. differ massively in one key measure of visibility.

Both see out the front almost identically. But in the Cessna you can’t easily see towards the inside of a turn, whereas in the Cherokee you can see into the turn, but not outside of the turn. And in straight flight the Cessna gives excellent vis to the ground alongside and down, whereas the Cherokee you can’t see the ground alongside and down; looking between 8 or 10 o’clock anything nearby is hidden behind the wing. And of course for a pilot in the left seat the vis is great to the left & relatively crappy to the right. Whereas in something like a Citabria (or Pitts or Extra) the people sit on the centerline and there’s no difference between left & right.

This was taken predawn this morning. That’s the edge of sunrise from cruise. Plenty of visibility out my side; not so much out the other side.

This was taken predawn this morning. That’s the edge of sunrise from cruise. Plenty of visibility out my side; not so much out the other side.

Is that Saturn and Jupiter in the picture?

No, although I agree it looks a lot like that.

The pic in my prior post was looking easterly at pre-sunrise. J&S are only visible now in the west post-sunset. The bright spots in the sky were some combo of a smudge on the window and a reflection of some light from a cockpit panel. The lights down below in the blackness are city/town lights. Venus was amazingly bright at more like 11 o’clock azimuth. So to the right of the pic I posted, but it didn’t photograph nearly as well as it looked to the eye; it was almost painfully bright.

Here’s that Venus pic. You can see lots of reflections of cockpit stuff; I didn’t get the camera close enough to the glass to mask all that.Oops. I added the red line directly above Venus so you could pick it out versus the cockpit reflections. 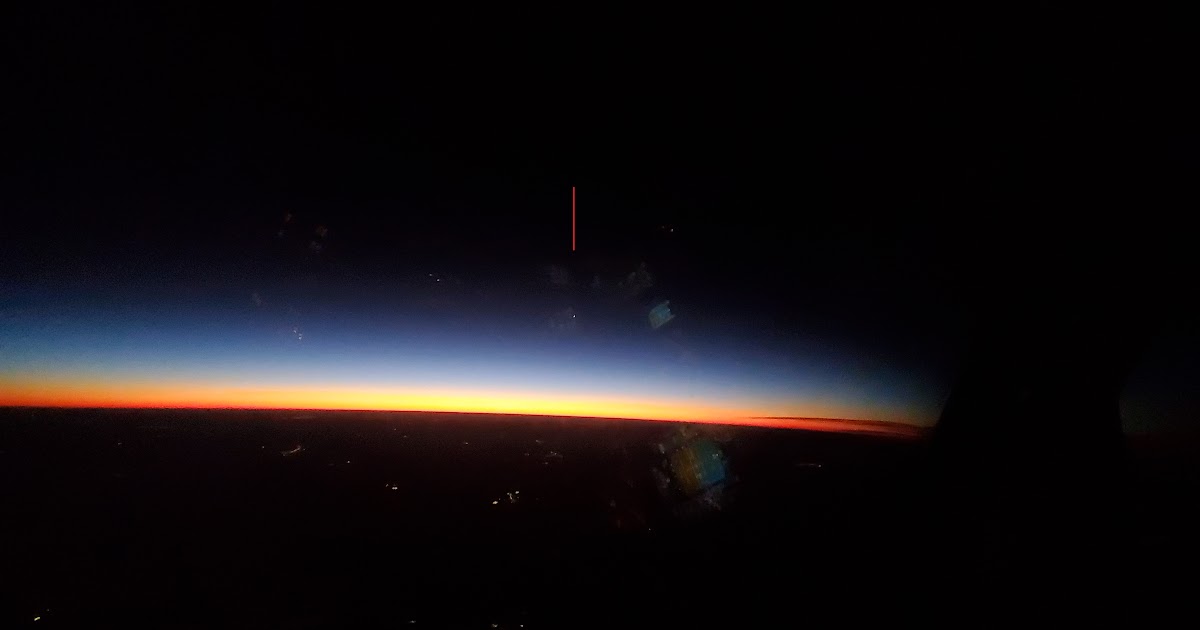 This pic is of Jupiter and Saturn. It was taken last Friday by my FO. We were tracking roughly northwest out near Bermuda awhile after sunset. 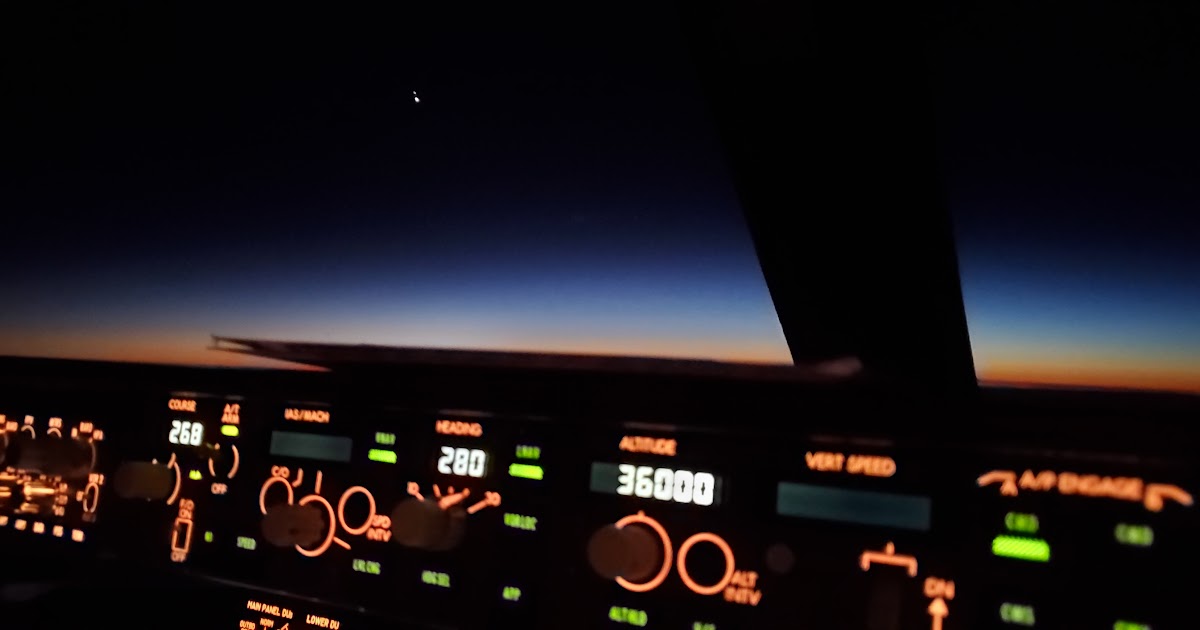 Love the Saturn/Jupiter pic. Thanks!

it was commissioned for National Geographic and it was such a nice plane the put it into production. The Air Cam.

I’ve flown in it. It is remarkably fun airplane.

I love that it is mostly old farts with boatloads of experience building a plane (yes, there were a few kids there being mentored but mostly older guys).

If I had jay Leno money that would be high on my list. I’d have to get one with floats.

One of the reasons for the good visibility from a glider cockpit may be the need to see wide areas of landscape to find a possible location of the next column of rising air.

Or a suitable field if you fail in your search for said column.

Continuing a bit on the topic of visibility out of cockpits …

This isn’t a great pic, but it’s taken looking out the right side rearmost window from the left seat and gives a sense of how much you can see cross-cockpit out that seemingly small window on the 737. It’s a little zoomed in versus what the human eye would see. The pic itself is the almost full Moon having risen shortly before sunset with a bunch of puffy fair weather cumulus way below us.

The light gray curved thing at the right edge is the FO’s headrest. He leaned forward so I could take the pic through the space normally filled with his head and shoulders. The wire is his headset cord; it plugs in just above the window. The window post forward of that wire is the one separating the two side windows. The diagonal thing at upper right is an internal structural brace. For scale, it’s about made from about 1-1/4" square stock.

Airliner Number 4 was a design by Norman Bel Geddes and Otto A. Koller for a 9-deck amphibious passenger aircraft intended to replace the large transatlantic liners that traveled between Europe and North America before the Second World War. It was never built. Norman Bel Geddes was one of the first industrial designers in the United States, and is one of the pioneers of streamlining in design. He produced ambitious and futuristic projects in the 1930s for vehicles, flying cars, aircraft, and con...

It’s amazing the cool shit you can draw when you don’t know much about actual aviation design. Even the fairly simple design knowledge of the day. Cool cite nevertheless. Bel Geddes was truly an iconic artist of real things. Just not real flying things.

In more somber news, yet another lightplane flight comes to a fatal end in a foggy suburb near an airport:

It happened around 11 a.m. near the intersection of Maple and Kennedy streets, just south of Rosewood Drive.

Hard to say yet whether the problem was a non-IFR pilot trying to stay VMC in untenable conditions, an officially-qualified pilot but with too rusty skills, fuel exhaustion, or a malfunction.

Sadly the FAA & NTSB both give these kinds of accidents little more than a lick and a promise, so I doubt we’ll ever learn too much more.