Topic is O’Hare. Not exactly General Aviation, but probably of interest to our many Chicago area members.

Back in Nov in this thread there was a discussion of O’Hare’s runway layout past, present, and future. The discussion kicks off right about here:

Actually, the open warfare at OHare is alive and well. And has been for the last 20 years. They are in the process of totally rearranging most of the runways at O’Hare. In prior years it was a 1940s style set of overlapping pickup-sticks pointing every which way. When they are done it’ll be like ATL or DFW: 6 runways abreast spread out across a 2-3 miles of width all pointing the very same way. Which means that now the planes are flying over just as many houses as before, but they’re differ…

Anyhow, I haven’t been to O’Hare myself since Mar 2020 just as COVID was cranking up. It was an eerie trip through a ghost town. So I had not realized that the new runway they’d been working on was opened in Nov 2020. I just found out a few days ago. Oops.

Here’s an article and pretty good pic of what’s most recently changed.
https://www.flychicago.com/community/pilotawareness/Pages/default.aspx

The old O’Hare I started my airline career with had 3 pairs of overlapping runways going in 3 different directions, plus one oddball cutting across the rest. O’Hare is now 6 parallel runways, 3 of which are much longer than in the Olde Dayes, plus 2 diagonals used only rarely, and only for departures. Three of the old ones are comprehensively gone, and one is now an otherwise indistinguishable taxiway.

As of today the wiki

has a picture at the top showing the latest runway under construction and the diagram down below is the current configuration with that runway in use.

Post 1484 in this thread links to a great historical slideshow.

The plane isn’t going to stall straight-on with a canard so he probably lost an engine and spun it in trying to turn back. Landing upside adds to that scenario although he might have flipped it.

Post 1484 in this thread links to a great historical slideshow.

Correct me if I’m wrong but isn’t one of the pictures in the slideshow a Lockheed RSV Constitution?

I think you’re looking at slide #7 from 1956. That’s a photo of an artist’s impression, not an actual photo of the real world. The airplane resembles the R6V, but it isn’t a perfect match; IMO the engines are too close to the fuselage and the chord of the horizontal tail is too small.

Whether is was an OK- drawing of an R6V or was just a generic prop airliner, it was definitely meant to represent the future state of the art in luxo long-haul passenger airplanes. Which the R6V certainly could have been in a slightly different economy and a slightly different timeline.


In an interesting coincidence, my grandfather was a commercial artist back in the day. From the 1920s through the 1970s he created pictures like that for magazines, advertising campaigns, encyclopedias, user manuals, tech data, training films, etc. Although he lived in Chicago for many years he wasn't involved in that project. I still have a set of encyclopedias he did a lot of the illustrations for.
Sam_Stone February 19, 2021, 2:57am #1705

It can’t technically stall, but some canards (and my memory says the early Velocity was one of them) can get into an unrecoverable high angle of attack, high sink rate condition. I seem to recall a story of a test pilot actually climbing out of the cockpit of one of these planes (a canard, not necessarily a Velocity) and leaning over the windcreen to move the Cg forward and get the nose down.

I don’t know if that happened here, but the Velocity company goes out of its way to say the airplane can’t stall even with an engine out. Pilots may get a false sense of security from that and attempt to fly slowly at a high AOA, not realizing how fast the drag and sink rate could build in that condition.

Possibly adding to the problem is that the Velocity is a high performance aircraft with a high approach and landing speed. A pilot used to Cessnas and Pipers could easily get behind that aircraft.

If he was going for that small field he crashed in front of, that would have been a tough landing. The Velocity lands at 85kts and needs 1500 feet of runway to land. It also has small wheels and would probably dig in to a soft field. I wonder if soft field technique is to leave the gear up and belly it in. I’d hate to collapse the nosegear at 85 kts and dig that pointy nose into the ground.

And with a Canard aircraft you pretty much have to fly them onto the runway and you can’t waddle in and do a short, near-stall landing like you can in something like a Cessna 172. Also, the velocity doesn’t have flaps or airbrakes, and uses drag from the props at idle, using the pitch control to control deceleration. With an engine out that might also have been dicey. I’m curious how many hours this guy had in that plane.

According to the below article, that engine loss should not have been that big of a deal. Apparently, the Velocity Twin can climb to 8000 ft or maintain 12,000 ft of altitude on one engine at full gross. The pilot should have been able to climb to a safe altitude for a controlled approach. Either more stuff went wrong, he was way over gross, or pilot error may have been a factor.

Most conventional twins would perform an involuntary roll toward the dead engine at this point - but not the V-Twin.

I think you’re looking at slide #7 from 1956. That’s a photo of an artist’s impression, not an actual photo of the real world. The airplane resembles the R6V, but it isn’t a perfect match; IMO the engines are too close to the fuselage and the chord of the horizontal tail is too small.

No, it’s clearly a photograph with the caption: The ceremony for Orchard Place Airport’s renaming to O’Hare Field draws a crowd on Sept. 18, 1949. (Chicago Tribune historical photo)

Landing in water or a marsh with gear extended (or fixed) in a light plane is pretty much a guaranteed end-over-end flip to finish inverted with the gear pointing at the sky.

Lack of stall is over-hyped by the canard manufacturers. As you say, a high sink rate once you get slow and power required is much greater than power available is equally fatal and often less obvious. I’d be more interested in Vmca issues with a twin than whether it can or can’t stall. Hyping that “It can’t stall even engine out” is demonstrating aerodynamic illiteracy. Or at least letting aerodynamics take a back seat to marketing hype.

Thanks for the link. We were definitely looking at 2 different pics. That one I have never seen before.

I totally agree that’s an R6V. And the best pic I’ve ever seen of one. That only two were built, it must have been a very special occasion to have one be there.

I’m sure that’s a Lockheed R6V. Look at the cockpit windows. It was greatly underpowered so they only made 2 prototypes. Here’s a picture of one being launched with RATO’s

Aww, I thought you guys were talking about one of these:

The Van's RV-6 and RV-6A are two-seat, single-engine, low-wing homebuilt airplanes sold in kit form by Van's Aircraft. The RV-6 is the tail-wheel equipped version while the RV-6A features a nose-wheel. The RV-6 was the first aircraft in the popular Van's RV series to feature side-by-side seating and the first to offer a nosewheel option. It was first flown in 1985. Over 2500 kits have been completed and flown. The RV-6 and RV-6A were replaced by the similar, but improved, RV-7 in 2001. Kit compo...

Jesus. Are its engines the same behemoths that went in a B-29, or am I misreading the spec? That plane is huge.

Thanks! Never heard of this one before.

Why Gadhafi's private jet is gathering dust on a French airfield

A luxurious customized Airbus A340 that once belonged to ousted Libyan leader Moammar Gadhafi has been stranded in Perpignan, France, since 2014, and is embroiled in lawsuits and controversy

Jesus. Are its engines the same behemoths that went in a B-29, or am I misreading the spec? That plane is huge .

A real-life, near Donnie Darko moment, just awhile ago outside of Denver. United Airlines Flight 328, a 777 flying from Denver to Honolulu, had a catastrophic failure of the right engine while climbing. It scattered engine parts over several neighborhoods. Surprisingly, I haven’t heard of any injuries. The plane returned to Denver International Airport and landed safely.

Tweet showing the engine in flight, shortly after the casualty. Engines aren’t supposed to look like that. At least, if it was a blade separation, it didn’t throw the blade through the cabin.

Article, with photos of airplane parts throughout the neighborhood.

Nice landing considering how much rudder input was involved. I’d be hoping the high speed rudder stops worked as intended.

I’m wondering what is flapping in front of the fan? Doesn’t appear that section completely came apart. looks like it’s on the turbine side. Whatever it was caused the separation of the cowling but not the fan shroud.

Or maybe you’re trying to train for what to do after you’ve flown up a valley in bad weather. To do it in a simulator with simulated bad weather you first have to get the student to get into the valley in the first place and they might say “the weather is bad, I’m not taking off”, or “that valley looks dangerous, I’m not flying up it”. The instructor is then forced to ask the student to pretend they’ve made a number of bad decisions. “Yes it’s bad weather but I want you to take off anyway”. “Yes that valley looks like a trap, and it is, but I want you to fly up it.”

Isn’t that the whole point of simulator training?

They are not there to wait and see if you ever make a bad decision. They are there to throw situations at you that test your skills when something goes wrong.

Not every bad situation is due to bad pilot decisions.

I just saw this report on the Kobe Bryant accident on YouTube. I know some here hate these things but for those who don’t: 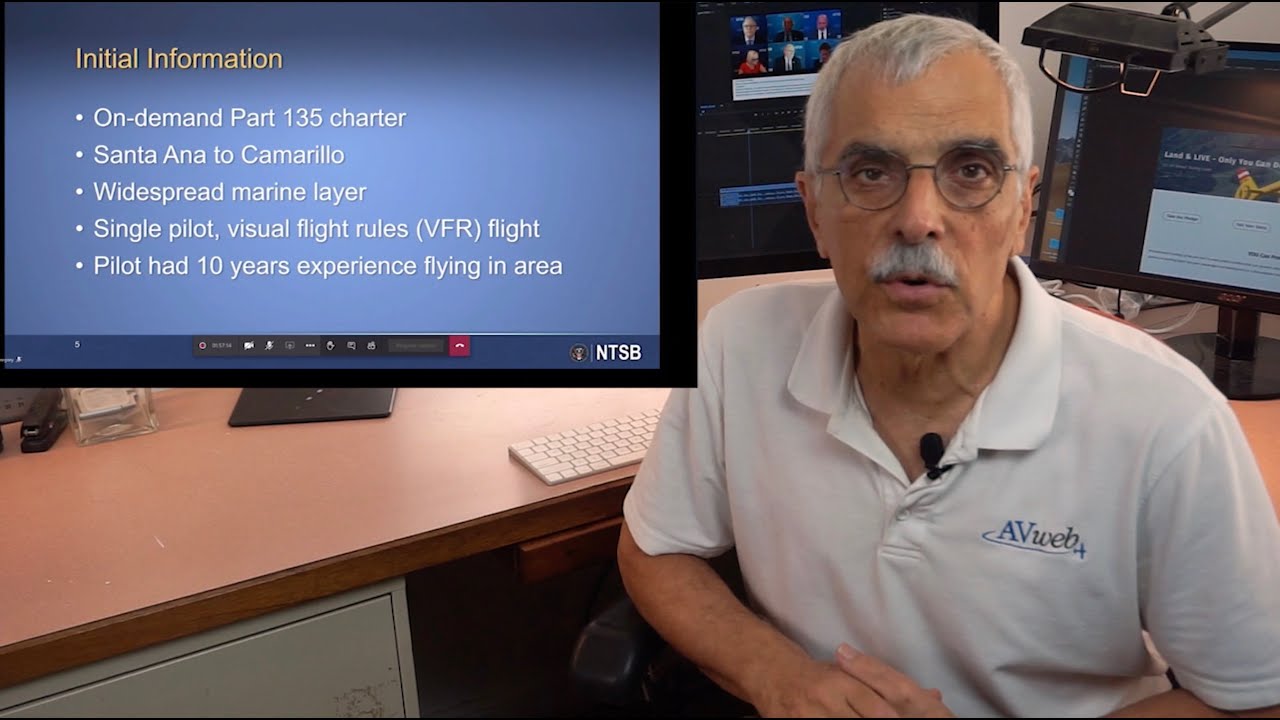 I don’t know any more about the UAL 777 than the articles cited above. There has been a run recently of engines coming at least partly unglued and a lot more cowling being torn off than the engineers expected. This affects several different aircraft and engine types from different manufacturers.

That is not a good sign from a certification POV. Something somewhere is the failure scenario assumptions are too rosy.

They should use hardware like bolts and rivets instead.