The Jeopardy thread [was James Holzhauer]

I expect them to take a break. Perhaps a couple of months.

I alsovexpect a huge ad campaign promoting the introduction of new host up to a month in advance.

Furthermore, I wouldn’t be surprised by some rule changes for Jeopardy! 3.0.

Furthermore, I wouldn’t be surprised by some rule changes for Jeopardy! 3.0 .

What makes you think that? What changes do you expect?

Anyone want to speculate on proposed rule changes? My mother pointed out that on Wheel of Fortune, the second and third place contestants go home with whatever money they have at the end. How would Jeopardy! gameplay change if this change was made? Perhaps fewer go-for-broke bets on Final Jeopardy?

That would be a return to the original 1964 format, where some people took home only $10.

I think the average sums on Jeopardy! are appreciably higher than those on Wheel, which would be a disincentive for MGP.

I recall reading in a long-lost Jeopardy! book that the reason for switching to prizes (and later fixed cash awards) for non-winners was that occasionally they would get players who had a specific amount of money in mind. These players tended to check out after accumulating the desired amount and bet little or nothing in Final, which took something away from the entertainment value of the show.

In the 1964 format, didn’t everyone get to take home “Compton’s Pictured Encyclopedia”? (it was the “source authority for the questions and answers used on Jeopardy”)

I believe they did, yes.

The “Jeopardy!” record-holder will be the first in a series of interim hosts replacing Trebek when the show resumes production next Monday.

A long-term host for Trebek, who died of cancer on Nov. 8, will be named later.

I’ve said this before in this thread, but I think it’s almost certain that there will be no significant rule changes.

After the initial wave of viewer curiosity over the various guest-hosts wanes, and perhaps even before a permanent replacement for Alex has been chosen, the producers will be facing a potentially disastrous drop in ratings among those viewers who will feel that “it’s just not Jeopardy! without Alex Trebek.” Changing the rules along with the host would certainly annoy those fans, as well as quite a few others who might be okay with the new host, but not with messing with the rules.

Clearly, the producers will not want to do anything that would risk losing them loyal viewers. Anyone suggesting that the rules should or might be changed would have to explain why and how the change would increase viewership more than decrease it. That’s the only metric the producers care about.

The rules of Jeopardy! have been remarkably stable over the 37 seasons of the new version. Here are the changes I can recall (with a little help from the Google machine):

While [the old rule] was good for those who played, it may not have made for good television. A player who is in third place and realizes that he or she has no shot at overtaking the first place player may decide to reach a particular goal, then sit out the rest of the game without consequence.

With this rule change, Jeopardy became a show that not only rewarded intelligence, but also rewarded skillful reflexes, making the show even more competitive.

I don’t watch any other game shows (unless you count the Great British Baking Show) so I can’t compare the constancy of Jeopardy!'s rules with those of other top game shows like Wheel or The Price is Right over their decades-long runs. But one of the great attractions of shows like these is the sense of security and stability they provide: they are a respite from the day’s troubles, a retreat to a place where everything will be the same as it was yesterday and the day before.

I do not like Ken Jennings. I never had and never will. I would like to be childish and stomp away since he is the “interim” host but I won’t. If he ends up being the permanent host, well, I might stomp and flounce.

I can’t compare the constancy of Jeopardy! 's rules with those of other top game shows like Wheel or The Price is Right over their decades-long runs.

The biggest Wheel change i see is that, in the beginning, the round winner would go to the prize booth and pick out something or several somethings up to the amount of their winnings. “I’ll take the color TV for $350, the his-and-her swizzle sticks for $75, and put the rest on account.” Considering how little play there seems to be in 22 minutes these days, I don’t know how anything ever got done under the old format.

The other change is that “I spin and everyone guesses letters because we have no time left.” Game shows just ain’t what they used to be.

You want to see interesting, watch Trebek on Classic Concentration.

Take it with a grain of salt but I have a friend who is a long time tv insider. He said that he knew for over a week that Ken would be the new host. He also said that the plan is for him to be the permanent host and there will be no other guest hosts. He is effectively in a probation period and will get the job so long as he doesn’t screw up.

If Ken Jennings is the permanent host, I predict this is the end of Jeopardy!

In the 1964 format, didn’t everyone get to take home “Compton’s Pictured Encyclopedia”? (it was the “source authority for the questions and answers used on Jeopardy”)

So Weird Al was wrong?

That’s right Al–you lost! And let me tell what you didn’t win: a twenty-
volume set of the Encyclopedia International, a case of Turtle Wax, and a year’s supply of Rice-a-Roni, the San Francisco treat.

Whenever I don’t like the Final Jeopardy category, I say, “Never mind, I’ll just take my Rice-A-Roni and go home.” Because I, for one, thought I remembered such lame consolation prizes.

Wondering that too. I wasn’t watching much when he made his run back in the day, but I’ve seen him return recently for GOAT etc, and he seems fine.

I don’t dislike him. I just think he wouldn’t do a great job as host, based on his flat reading of clues when he’s been on camera so far this season.

Nothing can top “What is a hoe?” 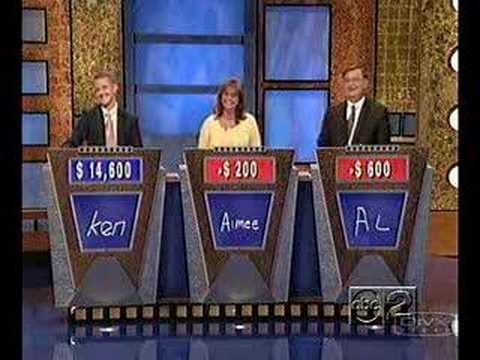