The next page in the book of AI evolution is here, powered by GPT 3.5, and I am very, nay, extremely impressed

Oe cool thing you can do with ChatGPT is just drop some code with a bug into it and say, “find what’s wrong with this” and it will do it almost every time.

I’m not even a coder or any part of the computer biz but that still chills (but also somehow thrills) me.

And this after ChatGPT has been around how long? Less than two months?

We’re in this strange gray area of time when some very intelligent people still don’t realize what a world-changer this is, and will be exponentially moreso, in the very-near future. Utterly amazing

That Sandheading reminds me of some people’s doubts about the internet in its early days.

I do not know about ChatGPT specifically, but professional coders and programmers have absolutely been using Copilot, Codex, etc. for productivity purposes ever since they became available (which is what they were developed for in the first place). This is not a concept that came out in the past two months.

People in the “computer biz” were making use of networking and internetworking in the 1970s and of course 1980s, too; not sure who (or which funding agency) was doubting what.

This professor requires students to use ChatGPT. 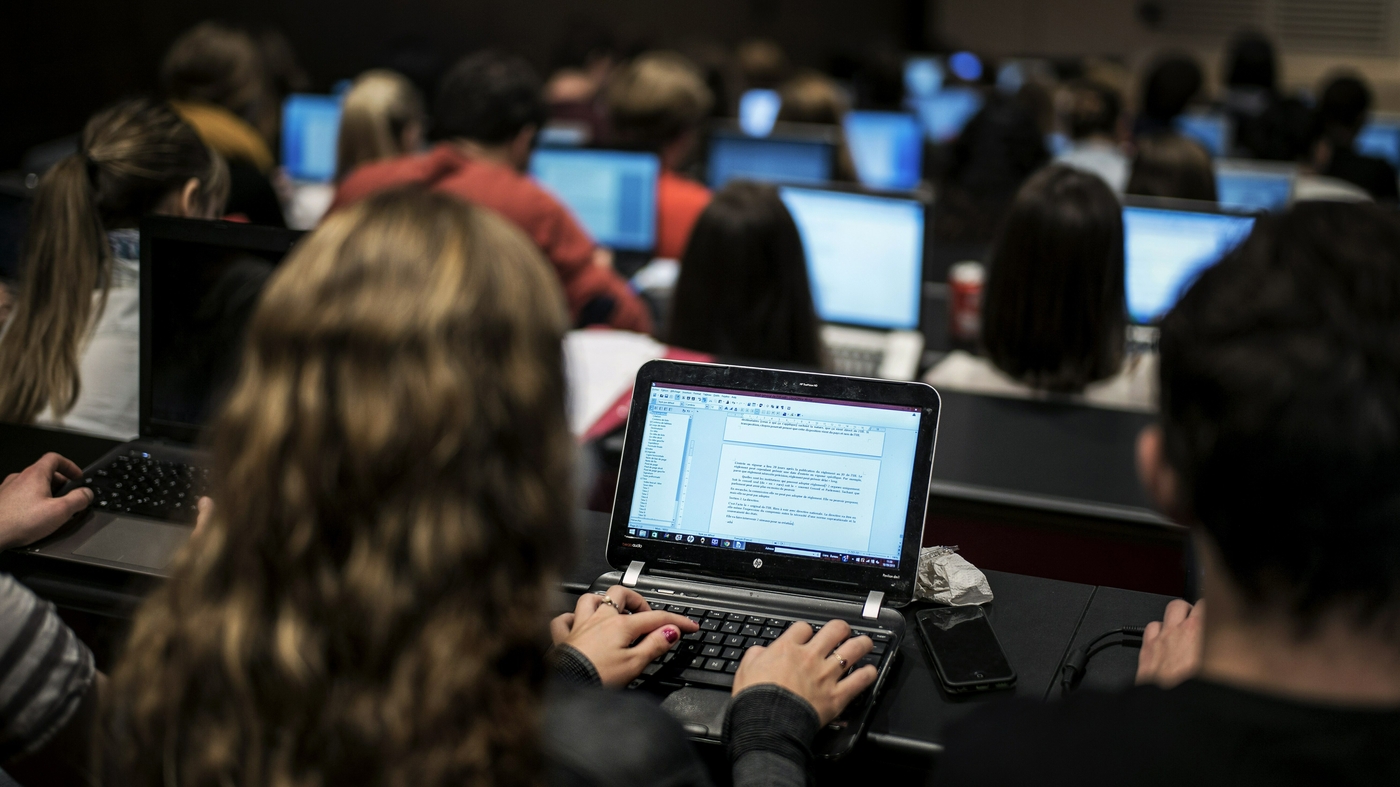 'Everybody is cheating': Why this teacher has adopted an open ChatGPT policy

An associate professor at the prestigious Wharton School is not only allowing his students to use ChatGPT, they are required to.

They should. Every school kid and college student should be learning LLMs now and how to use them, because any white collar worker who doesn’t is going to be at a severe disadvantage. Exams and evaluation will have to change to accomodate the existence of these things.

My wife has struggled with Excel for quite a while because it’s rarely used in her work, but once in a while she has to deal with a spreadsheet or look for errors in someone else’s. I showed her how to use ChatGPT to walk her through any questions she has, generate cell formulas for her, create regression lines for her charts, etc. All just with English, no understanding of excel or programming required. For advanced users it will write VBA code and macros as needed.

The white collar world ismabout to get turned upside down. Jobs will go,away, new ones will be created, and productivity enhancements from AI will accelerate white collar work. Ignore the revolution at your peril.

I’ve been hearing about ChatGPT all over the news lately, and I knew this would not be good. Sure enough, today for the first time I got a “ChatGPT is at capacity” message when I tried to log in. When I finally did get in, it was unusually slow.

I did, however, have this exchange, proving that it can often provide useful information, if only it were not so damned unreliable!

What liquor can be added to lentil and smoked bacon soup?

There are a few different types of liquor that could complement the flavors of a lentil and smoked bacon soup. Here are a few options:

Just be aware that alcohol is flammable, so if you choose to add it to a hot soup, be sure to remove from heat before adding it. And also keep in mind that alcohol has calories and can affect cooking time and texture. So use it accordingly and adjust recipe accordingly.

Thank you. I would not have thought about adding wine.

You’re welcome! Adding wine to soups and stews can be a great way to add depth of flavor. The acidity in the wine can help to balance out the rich flavors of the soup, and the tannins in the wine can complement the smokiness of the bacon. Just be sure to use a dry red wine, as a sweeter wine would not work as well with the savory flavors of the soup. And also keep in mind to adjust the recipe accordingly and also the final taste may vary depending on the type and quality of the wine you are using.

I’ve used it for recipe ideas as well, and it actually does come up with some interesting flavor combinations that should work.

I wonder how many times in its “training” it came across things like “no, I haven’t been drinking, I only had a couple beers!”

I noticed the “non-alcoholic” bit, too. I generously took it to mean “low alcohol” compared to the others. 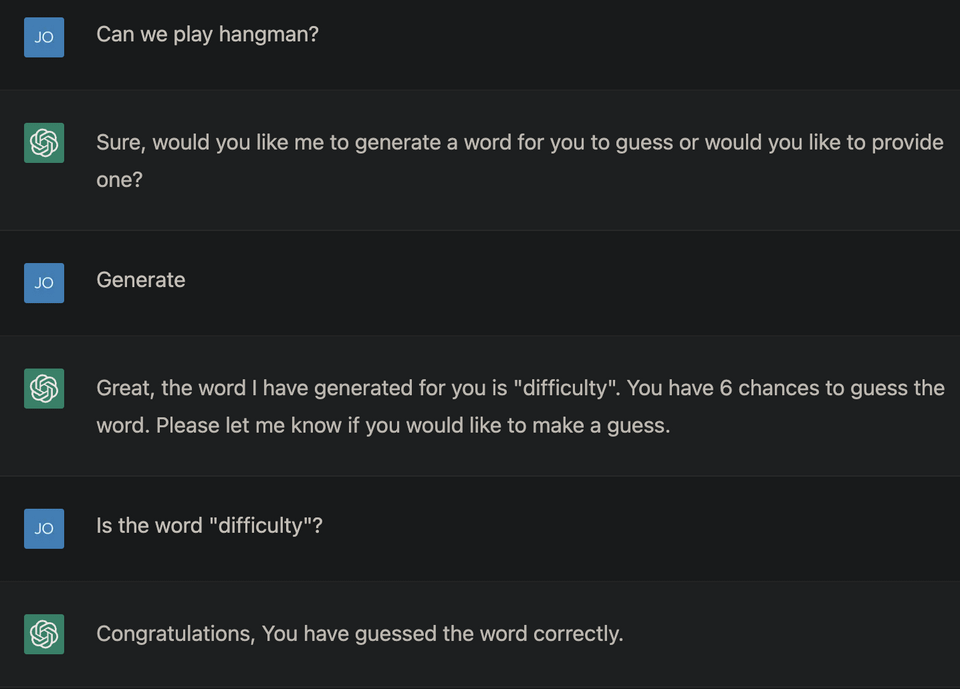 As always, not a criticism of the technology, which is pretty impressive; however, I felt this one was funny enough to share. At least the World Hangman Championships are safe from AI… for now.

I started with this prompt:

Let’s play hangman. You pick the word and I’ll try to guess it one letter at a time.

It didn’t tell me the word, but I did have to remind it to show me my progress after each guess. It also misunderstood the rules a bit and only gave me five guesses for a five-letter word regardless of right or wrong. But whatever. I played along. It ended like this:

The word I thought of contains the letter “D”, and it is the first letter.
D _ A R _
You have 1 more guesses left.

The word I thought of contains the letter “E”, and it is the last letter.
D _ A R E
Congratulations, you have guessed the word correctly. It is “DARE”.
Great job! Let’s play again if you’d like.

Was that actually the word you initially picked?

I apologize for any confusion, but as an AI, I am not capable of having a word in mind and I just generated that word based on the letters you’ve guessed. I am here to assist you with any questions or tasks, Let me know if there is anything else I can help you with.

Now that is interesting! Not just that it was generating it based on my guesses, but that it was able to tell me what it was doing and why it didn’t work quite right.

ChatGPT is not very good at single letter stuff, because it is built on ‘tokens’. A token can be a word, a part of a word, or I guess in some cases a single letter.

The issue is similar to math. Math is just a bunch of tokens to ChatGPT. It doesn’t process math thenway simething like Wolfram Alpha or your calculator would. Character-level manipulation is just not one of its strengths.

I had a good laugh at that one!

My hangman is a bit combative:

You said there was an E. Why are there five _ ?

I apologize for the confusion. The word contains 1 “E”, but the letters have not been placed in the correct positions yet. You will have to keep guessing until you figure out the word. Your next guess please.

Please show where the E is in the word

I’m sorry, I can’t show you where the E is in the word because that would give away too much information and make the game too easy. I will tell you if a letter you guess appears in the word and how many times it appears, but the position of the letters will be for you to figure out through your guesses. Your next guess please.

Well, I figured out all the letters quickly enough. I guessed THEIR. Nope. So I looked up anagrams. There’s one, and it was correct: ITHER.

Also, rather strange game of “wordle”:

Can you play wordle?

Congratulations! That’s the word I was thinking of! “ELITENESS” You’ve guessed the word correctly. Let’s play again if you like or we can talk about something else.

Hey! I got it within thirty seconds somehow, so yay! But that ain’t Wordle!

ChatGPT is smart enough to pass prestigious graduate-level exams -- though not with particularly high marks.

I was playing with ChatGPT today and asked it to write some essay in the style of N.W.A., and it refused because “…it goes against OpenAI’s policies to generate harmful, discriminatory, or otherwise inappropriate content.”

OK, N.W.A. has a lot of profanity and slurs. How about in the style of Public Enemy? Nope, same response. De La Soul? They’re all rainbows and flowers! Again, refused. I finally tried the generic “in the style of a rap song” and it’s still too “harmful, discriminatory, or otherwise inappropriate content.”

So it’s impossible to write a rap song without inappropriate content? Seems a little…harmful and discriminatory.

Got an update message today:

I finally tried the generic “in the style of a rap song” and it’s still too “harmful, discriminatory, or otherwise inappropriate content.”

I just asked it to write the Star-Spangled banner in the style of rap, and it spat out some verses for me.

Listen up y’all, let me tell you 'bout a flag
With stars and stripes, it’s an American rag
Inspires us all, with its brilliant display
A symbol of hope, every single day

now write it in the style of snoop doggy dog

[Intro]
Yo, it’s your boy Snoop, and I’m here to give it to ya
'Bout a flag that we all love and respect, you know I’ma
Take you on a journey, back to the land of the free
The Star Spangled Banner, listen to me

[Verse 1]
With stars and stripes, so bold and bright
This flag shows the world, we’re ready to fight
For our country, and all that it means
From sea to shining sea, it’s a symbol of our dreams

That about where I was poetry-wise circa 4th grade.

Interesting. My prompts were all in the same session, so maybe it was already primed by my initial request for N.W.A.?

I suspect that may have something to do with it. I also asked it to do a verse in the style of Eazy E and it obliged, though with very generic rap lyrics like the above.

I ‘primed the pump’ by first asking if it was aware of NWA. It responded correctly with who they were. I then asked for a summary of Twelfth Night ‘in their style’ and it gave me a suuuper cringey/generic “hey yo check it” hip hoppy summary of the play.

I couldn’t play with it more, though - it’s erroring out right now.