and then encountering Peter’s ex-wife from a timeline where they didn’t get married.

BTW, there is a comic that expands on that alternate timeline story. 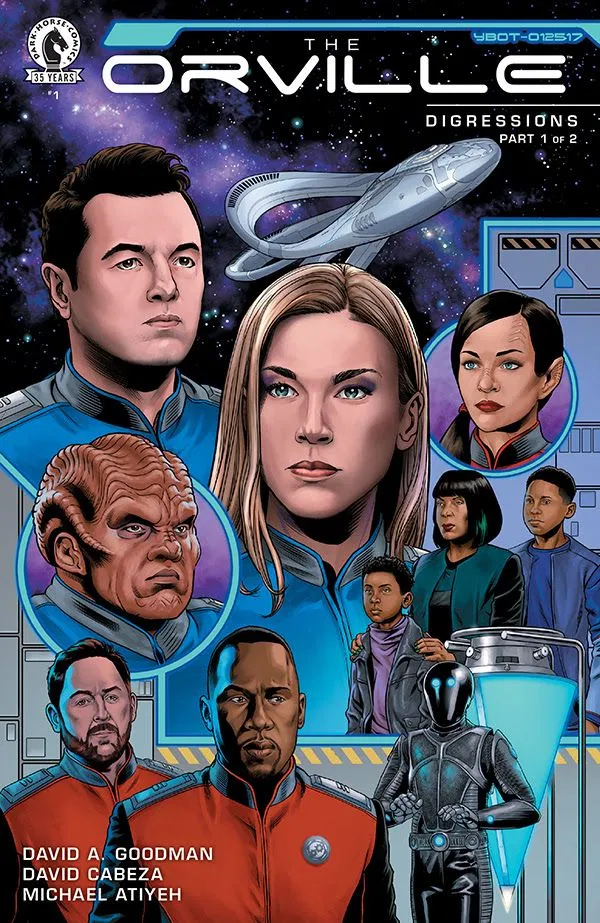 Digressions, Pt. 1 is the first part of a two-part episode known as Digressions. The issue follows the people who would have been on the USS Orville as they live completely unaware that their destinies were altered by Kelly Grayson's decision to...

I’ve seen the first two episodes of S3 and it’s OK. Not great, but I’ll keep watching. Don’t know why they didn’t break out those laser rifles sooner once the lights went out.

The few attempts at humor were complete duds. The acting often painful. The lack of any reasonable thought process by any character (or any writer) incomprehensible.

I had so been looking forward to this show’s return! Oh well. Maybe next week?

In the second episode, had they taken the precaution of wearing those space suits during the first visit to the alien vessel, they would not have had that problem with the spores. Of course, then there wouldn’t have been a story. The whole thing turned into a monster-of-the-week story, which I hope they don’t do again.

The whole thing turned into a monster-of-the-week story

Worse is the possibility that we really haven’t seen the end of these villains, now (despite no remaining physical structures of same mind left) in possession of an Admiral’s knowledge, codes, and such. One can only hope it’s a one off MOW!

Actually, I was delighted to have Finn cook up a toxin that would destroy the Bug Eyed Monster, and be ready to use it, rather than going through a Spock/McCoy/Data/Troi argument of “We have much to learn about this species, destroying him would be wrong.”

My question for this season is, what will they do with the character of Yaphit?

Very War of the Worlds common cold takedown but then the rational for trying to connect with the part that is Paul and to leave peacefully? That option, never accepted, is fine for The Doctor, but condemning the portions of those minds that are still human to forever as that? Letting knowledge of the Union and its strengths/weaknesses contained in those minds, to join the unknown but clearly threatening rest of their species?

Even Troi would be shouting to release the virus, “sensing” hate and aggression …

My question for this season is, what will they do with the character of Yaphit?

The one voiced by Norm MacDonald? My guess is the character quietly disappears.

Episode two was a poor setup for the last scene to resolve the distance between the Dr. and Isaac from the first episode. Now that they have that out of the way, hopefully future episodes will make sense.

We watched S3 Episode 1 the other night and we were bored out of our minds. Where was the humor? It’s gotten a bit too serious and dour and wasted a whole bunch of time on showing off the CGI (look the pilot can shoot drones for 10 minutes…cool).

My understanding is that Norm recorded his lines for the whole season, so it only becomes an issue if the show is renewed for a fourth season.

Episode 2 is 100 times better than episode 1 - it still has its flaws, but is much better.

I didn’t like episode 2 at all. I didn’t mind the MOW aspect, but the ending made no sense whatsoever. There’s this species that created a huge space station sending out a distress call. When you get there, it sprays you in the face with some infectious agent which transforms you into that species. Once the station has done that, it sends out a message to summon a ship. The obvious purpose of that is to takeover the ship of whatever species got caught in the trap - the Orville in this case. But at the end of the episode, even though the Orville was still helpless, the MOW ship still was content to take aboard the few transformed members of the crew and leave? When they could just as easily taken over the entire ship, transformed everyone, and set a course for the Union to takeover all those species as well?

I thought the Orville was back to power - a lot less helpless
I thought the incoming ship was still a bit away.
I thought the transformed members were somehow sent back to the station.

Like I said - it still had quite a few flaws - send an admiral, the captain and the first officer over to investigate ? “This is not in our database!” - of course not - you’re in an unknown ship in a section of space that has never been explored!.

But atleast they did not undo the the entire very special episode with a miracle resurrection.

I thought the Orville was back to power - a lot less helpless
I thought the incoming ship was still a bit away.

At the time, they had restored auxiliary power so they had lights & life support, but that’s all. John even said when he restored comms that he diverted power from life support so no one should breathe too heavy. Then when they detected the ship:

Kelly - “John, how soon will we have quantum drive?”
John - “Not soon enough.”

I guess he could have been Scottying and overestimating how long it would take to regain full power.

Hey - they had lights - and against spiders, lights are important.

Felt kind of like how shows that aren’t horror shows try to have a Halloween episode that doesn’t end up being a very good episode of that show or a good horror. Not terrible but meh.

So, not off to a great start. The first episode was definitely trying to flex the special effects budget - the opening dream sequence battle scene, the way too long and not particularly meaningful fighter vs drone sequence. I guess the suits probably said “start the season off with a bang to hook people” but I wish they could’ve could’ve been saved that budget for more dramatic episodes instead of scenes of no consequence.

In general, I hate starting off episodes with dream sequences that you don’t know are dream sequences. It feels like it’s cheap, like you were tricked, and then the next time something dramatic happens in the back of your mind you’re worried that it might not matter because maybe it’s a dream sequence and you won’t know until later, which robs the scene of dramatic impact.

I though the first episode had the makings of a good character episode but didn’t land it. Isaac still has value to the crew, and he’s one of the stars of the show, so you have to rectify that with it maybe not making sense to keep him on, with a lot of people distrusting or hating him. I was on board with that. But the resolution was lacking - the new crewman who was the ringleader for the anti-Isaac movement changed her mind over almost nothing. The doctor’s son basically said “okay, I said I wanted him to die, but I didn’t really want to”, and then she had a change of heart in response. That’s a really weak justification for the resolution. Like, it feels like there should be some sort of profound lesson learned, not just “oops, I regret being mean to Isaac” - that scene could definitely use a rewrite to make his plea and her change of heart more meaningful. I think the resolution really fizzled on that one.

It was interesting that they made Malloy part of the anti-Isaac movement without actually coming back to that later. I wonder if they’re setting him up for something down the road.

Second episode was alright I guess. Kinda cliche monster of the week. As mentioned in the thread, it doesn’t really make sense to let the newly converted aliens leave. I guess that could be the sort of dilemma that might be at the heart of a TNG episode - whether you should treat these creatures as life worthy of saving, but in this case the admiral used his command codes to disable the ship. It would seem that the new alien has at least some of his knowledge, so you’re giving a hostile species that set a trap for you high level knowledge of the Union. That’s an awful idea. I wonder if this was a one-off, or if whatever race this was is going to come back later as the big bads, with the admiral’s knowledge, posing a big threat. That would at least be a payoff for the poor decision to let them go.

This season has been severely short on Bortus, easily the most entertaining character in the show. He’s had like 5 lines all season and all but one of them were just routine order taking.

The ship is in uncharted territory and the crew encounters a giant ship with an alien lifeform hellbent on total assimilation. How original. Really disappointed with this season so far.

In fairness, after 78 episodes of Star Trek TOS, 176 of TNG, 168 of Voyager, and the exploration stories of the rest of the other incarnations, pretty much every original “uncharted territory” storyline has been used over and over again. We can criticize the execution of the plot, but the plot itself is only a framework.