The wonder of evolution

Not really, but I’m talking hardware reliability. In hardware defects from bad design is really very different from defects introduced by manufacturing or aging. I’m a software person also, so understand the problems of the design of reliable software, but that is really a totally different topic.
If the bits in a program really did rot, then we’d be on the same page.

The principle remains: It’s possible to introduce new failure modes while attempting to engineer more reliability into the system. I could probably come up with examples all day.

Possible? It is inevitable that you introduce new failure modes when you put in more reliability. A defect in the voter in a TMR system isn’t there without TMR. You just want the new defects you introduce which hurt reliability to be less than the defects you can mask.
Hell, we spent a year on a weird defect whose only effect was to toggle an output parity bit which caused the processor to be marked as bad. If that output wasn’t there, no one would have noticed the intermittent failure. I saw one case where they put the same chip back into service and it didn’t fail for another year.

Evolution is a stochastic optimization process that leaps over local minima. A small nit I’ll pick is that the process is not ‘driven’, it is ‘pulled’ by the fitness function. The fitness function is the environment which is also evolving - prey, predators, climate etc.

There is an elegant pivot structure in the rear wing of dragonflies shown in the lower photo below. The elliptical pivot is located between two driving beams that move in independent sinusoidal patterns. The phase relationship between the two sinusoidal motions determines the wing twist that controls flight.

Googled images of dragonfly fossils show that 100+ million years ago they looked about the same as they do today. But a close up of the wing in the area matching my macro shows a different structure. It appears to be a a vacant area around a fold in the wing. That would work nicely because the vertical folds create stiffness and form the airfoil section. A very flexible pivot that was optimum for the time. Evolving prey, predators and atmosphere changed the fitness function and pulled a different solution. Hence the elegant pivot. 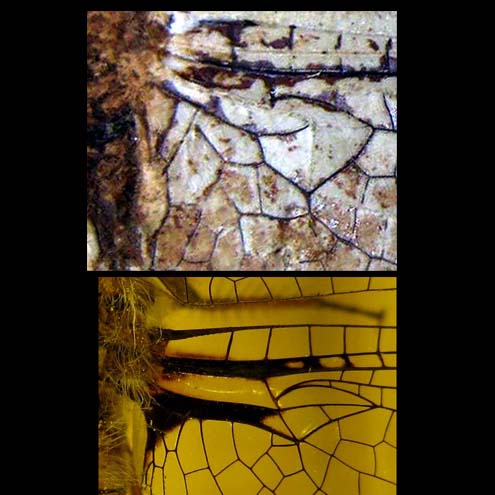 When I contemplate the wonder of evolution, the thing that really strikes awe and more than a bit of sadness is all the death that was necessary over the eons to produce this conscious sapient point-of-view I call me. Not only me, but the comfortable life I live mostly free of the savagery of nature, red in tooth and claw.