What aircraft could this have been?

I was roughly midway between Philadelphia and Washington. There are some military facilities nearby but I don’t think they have runways. There’s a general aviation airport maybe 8 miles from here. Nothing big.

Robot Arm’s few other pictures are closer than anything else, I guess, but they don’t have a long slender fuselage that grows narrower towards the front. These craft were only chunky in their last half. They were more like a dragster with a little crane on the front, in this regard.

Some of the Bedes have features like these craft, but not overall, couldn’t be confusing them I think.

Do helicopters ever fly long distances backwards? Sounds unlikely, but so did pet rocks, and they’re back in a thread around here somewhere…

It all sounds like a customised microlight to me.

Here’s a picture. The aircraft is moving from your right to your left. That is, the tall end is the leading end. This picture seems to mask the long slender fuselage, maybe the angle is wrong to see it, but it’s the only picture in which it looks like anything more than a little blob. 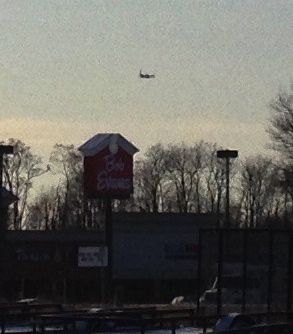 Don’t want to appear creepy, but I do this kind of thing for a hobby. I think I found where you were standing. If I’m right, then you were quite near this military airfield, Phillips AAF. Searching through that airfield sees a lot of dismantled helicopters.

I don’t think it could be the Lockheed QT-2PC because there were only two and according to this, #1 is in storage in a Museum at Ft. Rucker and #2 has been reverted to an SGS 2-32 configuration and is operated by a glider school in Denver. It now looks like this.

So far, I’m sticking to it being some sort of UAV. Especially if it was so near Aberdeen proving ground, which is Army.

Here are some examples of what they looked like, without the rotor on top, and traveling with the vertical panel first and the big part of the body last. In other words, if they were helicopters they were flying backwards. Bear in mind I was seeing them pretty nearly from the side. The sky was bright and I was really seeing more silhouette than painted colors. These pictures have about the right combination of vertical panel slanted forward, long slender tapered leading half of the body, and big complicated chunky trailing half of the body.

Those are five entirely different models of helicopter all from different companies and even different countries (one is a French Dauphin).

Without a picture, my guess ( from having worked on aircraft in the military) would be:

[ol]
[li]Some type of experimental UAV which hasn’t yet been released to the public[/li][li]An actual helicopter of a design which is either being tested or is only used for covert ops.[/li][/ol]

It is odd that they would test something like this along the Eastern seaboard as they would want to keep pictures of it out of aviation magazines and off of web sites. They usually test new models out West, over the Pacific or in Western Canada in the spring/summer months.

Also, helicopters rarely fly backward more than a few hundred yards or so. It is a very difficult maneuver to master and most pilots would not have the ability to do (especially in flying in pairs) nor would they feel comfortable doing so.

The only aircraft I’m aware of with a large propeller relative to it’s size is the Osprey.

Were they flying fast or barely putting along?

Well, if I were the sort of person stalkers found interesting, all my red flags would be up. I’m not, but we mostly didn’t know that.

That said, you did a pretty good job. Thinking about the direction I was facing and how far they seemed to be, though, I would bet that they flew directly over the airfield you pointed out. But they weren’t landing there. They would have been descending already. I bet when I lost sight of them they were actually beyond the airfield. Of course, they would have been heading south, and if they wanted to approach from a direction very different from north they would have had to circle around.

I think they were not Ospreys. I actually got to see one of those just last summer, from a roof deck, when it landed about a quarter mile from our vacation rental. Ospreys aren’t long and tapered toward the front. The speed of these craft? Hard to say, as it wasn’t clear to me how far away they were, but I would guess they were going quite slow for an airplane, probably less than 100 mph.

They could possibly have been the Lockheed QT-2PC, but only if those can fly backwards. The vertical stabilizer leaning forward on the leading end would have been the distinctive feature.

The more I think about human powered aircraft, with their enormous and slow turning propellers, the more this idea seems to match the propeller I could barely see turning. However the rest of these aircraft seemed too chunky, and the speed too high, and the probability of seeing two visually identical ones flying such long level routes on a cold and fairly windy January morning without any fanfare, all argue against this idea.