What is the best “war movie”?

Bridge on the River Kwai.

I dislike that movie, as I am familiar with the real bridge. It is in Kanchanaburi province of Thailand, bordering Myanmar, and I have visited it many times. The story is a complete fiction. The sole prisoner who ever escaped and made it out successfully was an Englishman who definitely was not parachuted back in to destroy the bridge. The bridge was finally taken out by aerial bombing in the closing days of the war.

The site is well worth a visit though. There are a couple of nice museums, and you can walk across the bridge or ride a train over it, as it’s still in use today.

I’ve been there too. Worth a visit. The bridge that exists was a contemporary iron bridge disassembled and swiped from the Dutch in Java and installed with competence by the Japanese engineers. Though a wooden bridge was built early to transport supplies. Also, the river Kwai was originally the next river over, the Thai swapped names because tourists were confused.

And…not complete fiction. There are many graves.

Some of my favorites:

The Eagle Has Landed
Where Eagles Dare

War movies don’t have to be historically accurate, just historically plausible. The Red Badge of Courage wasn’t based on a historic fact, yet is a classic novel. Much of Saving Private Ryan is fictional although based on a true story. Sometimes a true story gets bent quite a bit, like U-571 was altered so that the Enigma machine was captured by Americans although it was actually captured by the British before the US entered the war. It still made a good story, though I think it would have been better if the Royal Navy had been the good guys.

“Full Metal Jacket” gets my vote, but there certainly other worthy candidates.

Lots of great movies mentioned. I’d like to add “A Walk in the Sun” (1945), with Dana Andrews, Richard Conte, Lloyd Bridges, John Ireland, and lots more. It’s talk-intensive, with a little bit of action: 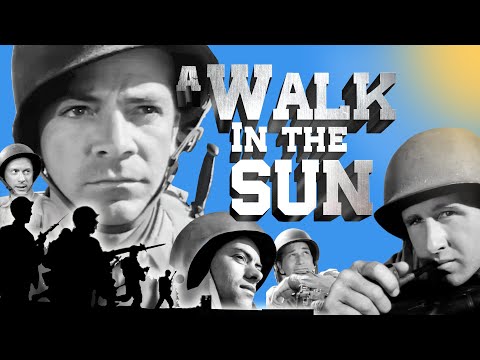 It did not get much publicity but the author of the book, James Bradley, is the son of a flag raiser.
But now after the movie and the book, the Pentagon says John Bradley was not really one of the guys in the picture.

Sometimes a true story gets bent quite a bit, like U-571 was altered so that the Enigma machine was captured by Americans although it was actually captured by the British before the US entered the war. It still made a good story, though I think it would have been better if the Royal Navy had been the good guys.

A film featuring the true story would have been dull. The British recovery of an Enigma from a U-boat (which to my knowledge was not the critical event in cracking the code) mainly involved a painstaking multi-hour search of the captured sub. It was done under hazardous conditions and those involved deserved recognition for bravery, but it wasn’t the stuff of a successful action movie.

Just saw a climactic half hour or so of Midway (1976). A pretty good movie despite being weighed down by star power. Much better than the cartoonish recent remake.

The Enemy Below ain’t bad either.

Most of what makes Midway a half way decent movie is unused footage from Tora, Tora, Tora. Oh, and Sensurround.

This begs the question once asked before. If you took any of your favourite war movies, would a modern remake possibly improve any of them?

If you took any of your favourite war movies, would a modern remake possibly improve any of them?

Not with WWII movies. The ones up to the late Sixties had the benefit of whole national militaries armed with WWII era equipment that could be rented cheap from cash-strapped countries like Spain and Czechoslovakia.

If you took any of your favourite war movies, would a modern remake possibly improve any of them?

Improvement is not impossible, but highly unlikely.

I was watching The World on Fire last night on PBS. Damned if those Stukas bombing Dunkirk didn’t look real to me. If they were CGI (and they must have been), they were incredibly well done!

Fury also had great success in blending live photography and CGI. The period Tiger they had could only be run for short periods of time, so most of the shots in the protracted tank battle were taken with a fake superstructure mounted on a mobile chassis, and the two were blended with computer-generated imagery. It wasn’t until after I saw the film that I found out about this, it was so convincing!

I’d have to go with Saving Private Ryan because it’s the great war movie that is the most about WAR. “Patton” is a character study; “Bridge on the River Kwai” is a character-driven drama; “Paths of Glory” is a story about injustice. The purpose of Saving Private Ryan is to present the viewer with pure, unadulterated war, the very essence of war as purely as cinema can present.

In that regard it’s certainly the most influential war movie ever made because every war movie since, every serious one anyway, has made an effort to be LIKE Saving Private Ryan.

It isn’t just the equipment (or the lack thereof). It’s more about the writing and the actors. I find it hard to take most of today’s personalities as belonging to my parents’ generation, or the scripts reflecting anything of those times.

I was watching an episode of the awful Dirty Dozen TV series back it the '80s, in which they fought a battle in the forest with Fascist Balkan cavalry. I switched it off when one of the GIs told his buddy “Man, you were awesome up there on that horse!”

U-571
That rewriting of history caused a remarkable amount of resentment in the UK, even though it’s unlikely that any of those who took part are still with us.

I don’t blame them. I thought at the time that the producers probably thought a US audience wouldn’t go for a film with someone other than Americans were the heroes.

The purpose of Saving Private Ryan is to present the viewer with pure, unadulterated war, the very essence of war as purely as cinema can present.

DesertRoomie and I saw that first-run in the theater. When we were walking out she said quietly, “I’d heard how bad Omaha Beach was but I was thinking bullets, not body parts.” I told her that since the Napoleonic era the terror of infantry has not been small arms, but artillery because it blows you to pieces and there’s nothing you can do about it.

It’s a series, not a movie, but I really liked Band of Brothers and the Pacific.