Why Can't Technetium Keep It Together?

but suffice to say that any situation with all of the nucleons being the same species is always one of the repulsive situations.

While I did misjudge the case of 2-3 protons, that doesn’t sound right either. Here is the relevant force graph between two protons: 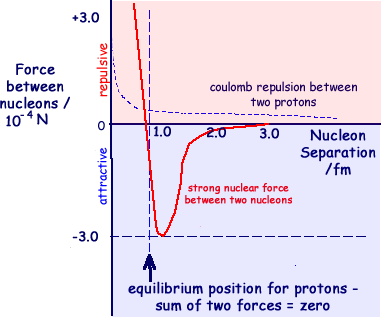 A few things of note:

So why does the Coulomb force break apart nuclei as you get to get to larger numbers? Well, the strong force repulsion at close range means that the nucleons can’t pack together too closely. But that means that as you add more nucleons, some of them will necessarily be farther apart than if you just had a few. You can pack 4 oranges together so that each touches the other, but with 5 that’s no longer true. One pair is farther apart; nearly double that of touching pairs. Which puts it into the quickly decaying territory of the strong force. A 1/r^2 force on the other hand still has >1/4 the strength.

It’s not as simple as that graph makes it out to be: If it were, then you could, in fact, have diprotons or dineutrons (they wouldn’t be stable, as they’d decay to deuterons, but they’d at least exist briefly). But we don’t. The force depends on various aspects of the states of the particles. That graph might be typical, for two protons out of many within a diverse nucleus, but it isn’t accurate for the case where you just have two protons.

It’d be unstable, but unstable on the order of neutron decay, so would tend to hold together for a few minutes or so.

Note that dineutrons (bound neutron pairs) have been observed. I can’t find any real information on its half-life, though a couple of papers suggest it may be on the order of milliseconds to seconds. Not quite as stable as a free neutron, but they aren’t experiencing a purely repulsive force, either.

Yeah, it’s just weird that we end up with such a structured system - you have six (or 9 or 60) quantum waves, and yet the interactions work out to bind sets of three together much more closely than any other number of waves bind (you don’t see even brief states that could be described as quad-quarks, do you?)

This may not be known with certainty, however.

Thanks! I did not know that (I remember theories about pentaquarks, I think)

I do not know the state of the art— as time goes on we get better simulations and more LHC experimental results. I think at least some of these exotic particles are theorized to be tetraquarks, but would have to check the review tables. Wikipedia lists a number of candidates, including 4 or 5 announced just in the past year.

3Li is also nowhere close to stable (really too unstable to be measured; the 3 protons just fly apart immediately).

Are you saying there’s a lithium isotope that has just three protons and no neutrons at all?

Are you saying there’s a lithium isotope that has just three protons and no neutrons at all?

Only in a definitional sense. All elements are defined by the number of protons in their nucleus, with some variable number of neutrons. If you could somehow get 3 protons together for any duration of time, no matter how minimal, then it’s an isotope of lithium. 4Li exists but has a half-life measured in yoctoseconds. 3Li wouldn’t even be that long.

2He has (probably) been detected, though. It’s wildly unstable of course, barely more than two protons in close proximity… but that still makes it an isotope of helium.

To be clear, there is a real, meaningful distinction between a particle (or combination of particles) which is unstable with an extremely short lifespan, and a particle (or combination) which simply does not exist at all. The former has a local minimum in its potential. It might be a very shallow minimum, or with very narrow walls, such that it’s very easy for the constituents to escape that minimum, but it still does have a minimum. But some attempts at combinations of particles don’t have such a minimum at all.

Indeed–and I’ve no idea of which category a triproton/3Li fits in at all. I found a paper indicating it may be emitted as a decay mode for some germanium isotopes… but even if so, it may not make it far enough out of the nucleus to escape its stabilization effects. Regardless, I brought it up only for completeness’ sake.