Wristwatch: What does "chronometer" signify?

You say “no practical value beyond artistry”, I say “obsolete”.

Ah yes, but you said “horribly obsolete.” Nobody says they are not obsolete. But why the pejorative? I might say that they are fabulously obsolete.

I would kill for a Curta. I have a Brunsviga.

Their obsolesense is to a degree that is horrible. They can be fabulously artistic and horribly obsolete at the same time.

Their obsolesense is to a degree that is horrible.

I wonder what you might make of the Grand Seiko spring drive? 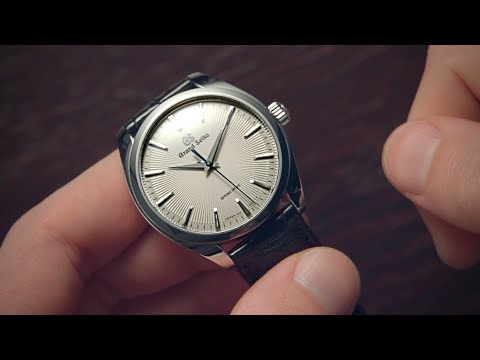 Pretty much, yes. I don’t know if it is still true but the first quartz watches could not be certified as chronometers because one of the tests was that they had to maintain accuracy over a variety of positions and the quartz movements would not do so.

You should look in to F.P. Journe. Almost impossible to get timepieces (only 900 are made each year…many thousands want them…very beautiful and well made movements).

Spring drive is amazing. Both a quartz and a mechanical watch. Genius.

Some women use jewellery as wealth signalling. Others just like nice jewellery. Same with watches.

It seems to me that if one’s intent is for wealth signaling or for nice jewelry, and they want to use a wristwatch in that function, then the only criterion should be the beauty of the watch. The accuracy of the watch should be irrelevant.

In fact, I’m not sure if the watch would even need to be working at all to fulfil these functions. The great majority of the time, the signaling or jewelry is accomplished from a distance; only rarely is the viewer close enough to see whether the time is correct. And the viewer is never able to decide whether the watch is accurate within seconds.

In fact, I’m not sure if the watch would even need to be working at all to fulfil these functions.

The huge market in fake Rolexes is testament to exactly that. You can get hilariously bad fakes to reproductions that would fool an expert before they took the back off.

The guaranteed way to annoy a Rolex owner is to ask if it is real or a fake.

You should look in to F.P. Journe.

The A Lange & Sohne Saxonia Thin, maybe, one day, if I am very lucky. A Grand Seiko Omiwatari might be more in range.

In fact, I’m not sure if the watch would even need to be working at all to fulfil these functions. The great majority of the time, the signaling or jewelry is accomplished from a distance; only rarely is the viewer close enough to see whether the time is correct. And the viewer is never able to decide whether the watch is accurate within seconds.

But the wearer of the watch is the primary viewer. I gaze at my beautiful Breitling many times a day. It also tells the time, which makes it useful to me.

But the wearer of the watch is the primary viewer. I gaze at my beautiful Breitling many times a day. It also tells the time, which makes it useful to me.

Then you are fortunate to be among those who truly appreciate what they have. My comments were directed towards those who “dress to impress”; for them, the onlookers are the primary viewers.

I treated myself to my new watch when my apple watch was getting a bit tired. iWatch no doubt told a more accurate time but it seriously annoyed me (I switched off virtually all notifications), and it’s ugly (the face always just being black is crappy). For all those reason, my Breitling gives me joy that far exceeds what it should.

Mechanical watches are jewellery. They fit pretty much the same niche. It is just that you don’t require rare metals or rare geometries of elements in crystalline form to add value. Rather the value is in the artistry of the maker.

About twenty years ago a relative was travelling in the Southeast Asia region and noticed that people were not buying/wearing battery-powered quartz watches. (How he noticed this - I don’t know.) He asked about this and was told “We can’t be assured of always getting the batteries here, but we can always get a mechanical watch serviced.” I expect that the people there were buying watches like this.

However, I agree that much of the mechanical watch has to do with the fascination of jewelry. There is also appreciation of craftsmanship. In furniture, it’s the builder who polishes the BACK of drawers. In watches…

The Most Exclusive Automatic: The Vacheron Caliber 1120

THE MOST EXCLUSIVE AUTOMATIC:THE VACHERON CALIBER 1120 by Walt Odets To my knowledge, there is only a single caliber that has been used by all members of the Swiss watchmaking trinity–Audemars Piguet, Patek Philippe, and Vacheron Constantin–and by no...

I expect that the people there were buying watches like this.

I have a duplicate of dad’s 1974 Seiko Bellmatic that I wear in rotation. (Dad’s actual watch is put safely away.)

As for Rolexes, I like them because they’re un-hip. The GMT II and the Sub are stodgy, non-flashy (OK, I do have a Jubilee bracelet on the GMT II), ‘every day’ watches. They’re mostly function, but I like the form-follows function styling. I really appreciate the craftsmanship of a mechanical movement. What annoys me about Rolexes is that when I got them they were not (what I consider) ‘high-end watches’. With the Jubilee bracelet, the GMT II cost four kilobucks in 2001. Not cheap, but middle-class. Now prices have skyrocketed to the point where they’re no longer middle-class watches. Not even upper middle-class, I think. I love Rolexes, but they’re not ‘all that’.

I went to Thailand in the early 90s and a good friend asked me to get him a fake Rolex. I bought one on the street for like five or ten dollars and gave it to him. The damn thing actually still works.

I never wear watches. I hate the feeling of anything squashed on my wrist. When I finally got a cell phone, I used that to tell the time. Before that, I had a series of super cheapie digital watches that I work on my belt loop. Even if I didn’t mind something on my wrist, the idea of something valuable that I could easily bang into something a ruin would make me way too nervous to wear it.

My dad liked nice, but not super expensive, watches and I inherited a couple of them. They’re just sitting in a drawer until I eventually give them to my nephew. One is a Tissot Seastar and one is a Breitling Aerospace. My brief internet searching leads me to believe that they are worth several hundred dollars each at most. The Tissot still works. The Breitling needs a new battery. I called the only authorized dealer in town and he said if I gave it to him, it would need to be sent to the factory for a replacement and it would cost $200 assuming nothing else needed to be repaired.

The thing is, I never even bother worrying about batteries, either. When the battery dies in one of my cheap Casios (usually after well over a decade), I just buy another one. I’ll probably spend less than $200 on watches over my lifetime, and I’ll still have a more precise timepiece than any of those mechanical chronometers.

As for Rolexes, I like them because they’re un-hip.

I always assumed that among watch enthusiasts, Rolex had a reputation for being nouveau-riche - something that people would wear who want to show off wealth, whereas more discreet and sincere collectors would go for equally expensive, but less known among the general population, brands. This is not a personal jab against you, only an example that brand perception can vary greatly.

FWIW, my main watch is a $500 solar-powered and radio-controlled Citizen. Having practically no drift whatsoever, it will, in terms of accuracy, beat the hell out of any conceivable alternative, including (or rather especially) those that are more expensive by an order or two of magnitude.

Among watch enthusiasts, Rolex is a lower-mid-tier mass produced item. A quality item to be certain, but nevertheless not the end all be all of watchmaking.

Some of the most impressive pieces that would blow the socks of a watch geek wouldn’t get a second glance from anyone not an enthusiast.

It’s among the general public/people who know nothing about watches that Rolex is seen as wealth signaling /nouveau-riche. This is because Rolex spends an ungodly amount of money on marketing, much more than they spend on actually making watches.