The crew of the space shuttle Challenger honored us by the manner in which they lived their lives. We will never forget them, nor the last time we saw them, this morning, as they prepared for the journey and waved goodbye and “slipped the surly bonds of earth” to “touch the face of God.”

That scene is burned into my brain, almost literally. I was home sick with a very high fever, actually having occasional hallucinations, when I saw the tragedy on television. At first I thought it was another horrible waking dream, but I couldn’t fucking wake up.

I never actually saw it until some months later. I was in a student apartment and we didn’t have a tv.

I was shopping in a K-mart store at the time. Everyone, customers and employees alike, were gathered in the appliance department watching the TV coverage.

I was working an evening shift and was at the laundromat at the mall. After putting my clothes into the dryer I went into a department store to see a wall of TVs all tuned to the same thing.

Christa McAuliffe: “I touch the future. I teach.” 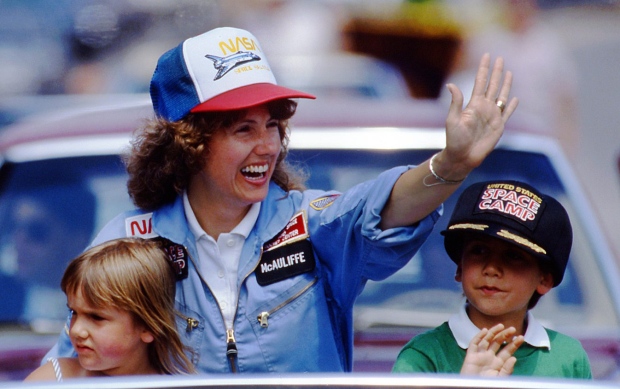 Thirty years after the Concord High School class of '86 watched social studies teacher Christa McAuliffe and six astronauts perish when the space shuttle Challenger exploded on live TV, a number of them have gone into teaching -- and some wonder if,...

The bravest are surely those who have the clearest vision of what is before them, glory and danger alike, and yet notwithstanding, go out to meet it.

RTFirefly This is a memorial thread for those who died in the Challenger crash. You’re free to open a thread memorializing those who died in car crashes that day if it’s that sincerely meaningful to you, but keep it out of this thread.

I was in chemistry class and a friend came running in to tell us. He was getting ready for class and turned the TV on. Seeing a space shuttle lift off he decided to wait a minute to watch and saw it.

I was a new engineer at NAS Jacksonville, and by that time, shuttle launches were so ho-hum, I was playing cards with some coworkers during lunch while some other coworkers were out on the roof of our building to see if they could spot the launch. Then all of a sudden, we were all out on the roof trying to make sense of the trails in the sky. It was a sobering day. The Space Shuttle Challenger disaster was a fatal incident in the United States space program that occurred on Tuesday, January 28, 1986, when the Space Shuttle Challenger (OV-099) broke apart 73 seconds into its flight, killing all seven crew members aboard. The crew consisted of five NASA astronauts, one payload specialist, and a civilian schoolteacher. The mission carried the designation STS-51-L and was the tenth flight for the Challenger orbiter. The spacecraft disintegrated over the Atla...

I saw the endless repeats on the news that morning as I was getting ready for classes. Somehow I made it to school, where my advisor saw me and told me to take the next couple of days off classes.

Thank you for starting the thread. It is right that we remember and memorialize the people and the event.

I live near Dick Scobee Elementary School in Auburn, Washington. I’m reminded of the disaster every time I drive by the school. There is a sign with a shuttle circling the earth on the front of the school.

One day I really have to visit the Ron McNair Memorial in Lake City, SC.

Grew up 20 minutes from Concord. The excitement about Christa McAuliffe was huge. Everyone was amped up, and every school child was glued to the TV. After the accident, nobody really knew what to do. They sent us outside for an unscheduled recess while they discussed it. Ultimately they decided to just bring us back to continue to watch the coverage.

That night, the high school at which I was the varsity basketball PA announcer had a home game, and the athletic director asked me to call for a moment of silence before the game began. I figured he’d do this, and my response was, “Sure, but, given that one of the dead was a teacher, wouldn’t it be more appropriate for a teacher to do it?” (In the end, a faculty administrator did it.)

Whenever I go to Washington DC, one of the things I always do is to go to the Challenger (now Challenger & Columbia) Memorial at Arlington Cemetery. The Challenger’s commander and pilot, Lt. Colonel Dick Scoobe and (Navy) Captain Michael Smith, are buried there as well. If you’re ever there, it’s located near where the shuttle bus stops for the Tomb of the Unknowns.

I was working at my desk when somebody told us the Challenger had exploded. I refused to believe it, until I and others walked up the hall where a TV was and saw it.

Like Kennedy’s assisination and 9-11, it’s one of those events that you always remember where you heard about it.