So when i watch old cop shows and movies I have to laugh when both the cops and the crooks are driving these BIG ASS FISHTAILING PIECES OF SHIT. Yeah the cop cars are great if you’re driving in a straight line on a highway, but one turn at 20 miles per hour and they’re all over the place.

Was Bullitt the first movie to feature a cop in a sporty vehicle that could make a turn at a decent speed? Who was the first TV cop? Even Starsky’s car was big as hell. I thought maybe Baretta, who drove a 66 Chevy Impala, but i couldnt find a clip of him in a chase.

I DID find some stills where he flipped the car. 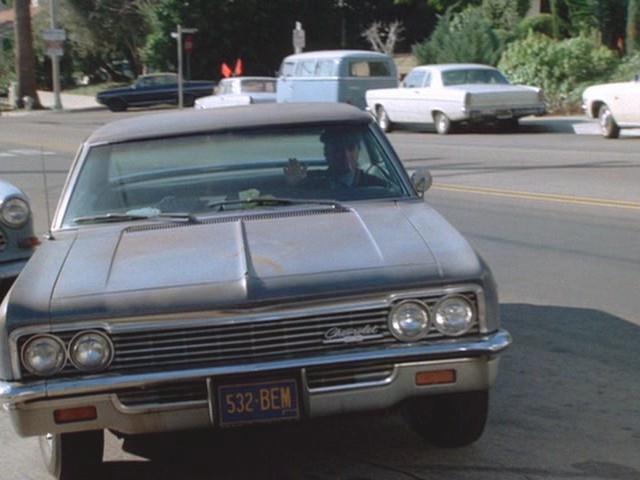 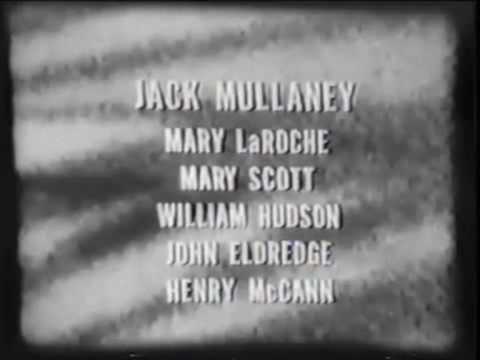 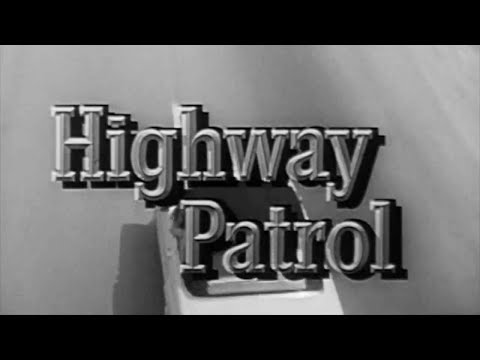 LOL 5:38…If i were driving behind a cop car in the 70’s, I’d stay a good mile back. These guys are about to spin out or flip the car just changing lanes 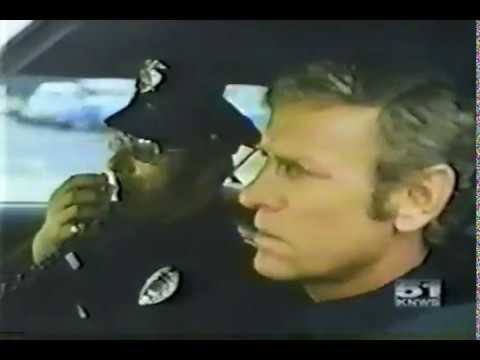 Of course, no one is wearing a shoulder belt.

Meanwhile, in England, Bodie and Doyle on The Professionals were driving a Ford Capri! 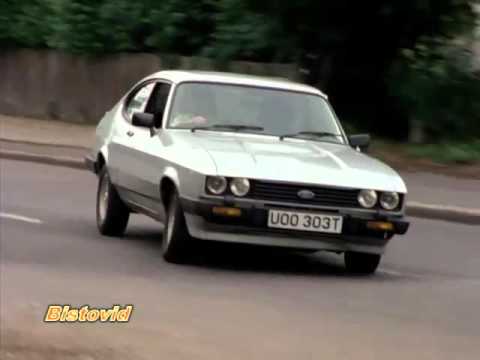 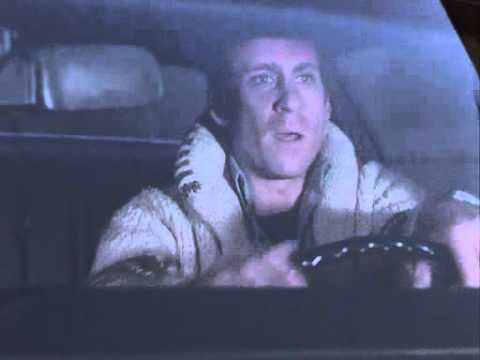 Seems to handle a lot better then the cars in those Police Story clips I posted…of course so far I’ve seen Starsky and Hutch chase a van, a hearse, and get chased by a Lincoln continental, so not much to go on.

My first car was a Gran Torino. Different color than the S&H car, without the stripe, but same body style. I loved that car, though it burned oil so bad I had to add new oil almost as fast as I refilled the gas tank.

He wasn’t catching anyone in that thing. But he didn’t ever have to, his suspects never ran.

Movies? Real life didn’t have cop cars that could take a corner at high speed. My first cop car was a Chevy Caprice. Great straight line speed, zero handling. Training helped but it’s not like we got a lot of drivers training. Now we are buying exclusively SUVs.

Of course, no one is wearing a shoulder belt.

On Major Crimes, one of the character remark it is LAPD policy (or at least standard practice) to NOT wear seat belts in a car chase. I don’t get it.

Ha! That thing was a pig boat. I remember one episode where Starsky, commenting on a different car, remarked “Well, it doesn’t corner like a (the?) Torino.” No Starsky, I’m sure it corners WAY better. Even if it is a pickup truck! That jacked up rear end does nothing for cornering.

But it sure looked cool. The model kit even comes with the bubble light, THE coolest unmarked police car accessory, ever. 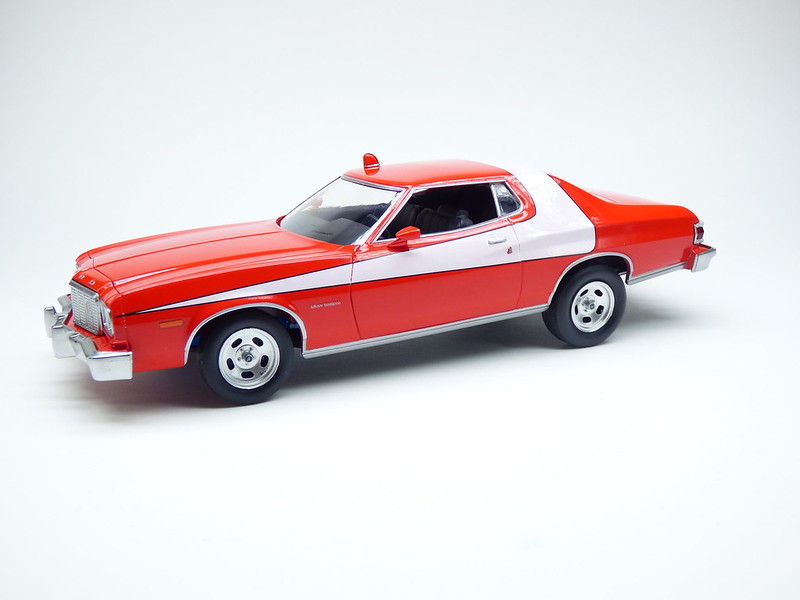 Fun Fact: when I lived in Marina Del Rey, one of my neighbors had a red tomato Torino that he claimed was one of the actual shooting cars. Never could prove it, but it wasn’t impossible.

There was this one season only show in the 70s called Chase. They were one of those “specialized cop departments” that did a lot of both undercover work, and well, chases. Anyway, they had an unmarked car, it was an ex-patrol four door Satellite ( It’s got a cop motor, a 440 cubic inch plant, it’s got cop tires, cop suspensions, cop shocks) but they painted it primer grey, put a hood scoop, side pipes and five hole slotted mags. I liked that one way better than Starsky’s tomato. IIRC it has a bubble light, too.

I have to admit, “Let my more maneuverable car go off a cliff, to fool the two guys chasing me”, was not what I was expecting. 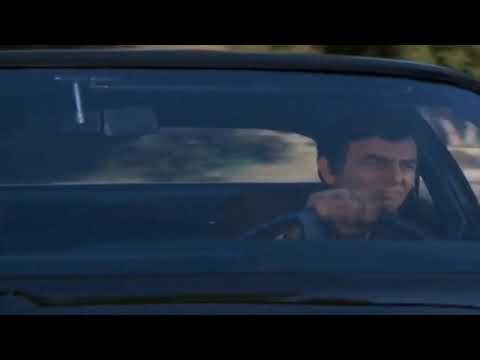 I have to admit, “Let my more maneuverable car go off a cliff, to fool the two guys chasing me”, was not what I was expecting…

I wasn’t expecting his Plymouth to turn into a Ford when it went over the cliff!

They used parts of this chase in a different episode, too. Lazy.

I was recently watching old Adam-12 episodes. One of the interesting trivia facts was that they had a few cars they used for close ups. If you watch you can see the same handful of cars being used over and over again.

With Adam 12, we like trying to guess which cars belong to the production crew. “Oh look, there’s the gold Mustang parked across the street, again.”

Watch enough and you start to notice how they tape over ID badges and nameplates. Even if the dialog says “it’s a Mustang”, the letters are taped over on the car. Product un-placement, I guess.

Watch enough and you start to notice how they tape over ID badges and nameplates.

Yes! They do that with boats at the marina as well. They walk by a Bayliner and the name is taped over.

Whats funny is, you can tell when the actor is driving IRL or on a greenscreen or some kind of in-set thing.

Its also funny to see a chase, and think “Oh they look like they’re about to eat shit…” (Camera cuts)…“Yup, they ate shit.”

I’m a tad confused by this thread. Even in Bullitt - weren’t the 2 cars a 5-wheeled Rustang and a Charger? Neither of those cars were all that in terms of handling.

Like Loach observed, well past the 70s, standard cop cars IRL were Caprices and Crown Vics. There were some (really pretty few) decent handling US sports cars in the 60s, and some smaller/lighter cars that could be modified. But I always believed something more substantial was desired in a cop car. So it does not strike me as unusual that cops in the 60s-70s were driving what cares were available then.

Or is this thread just to joke about big old police boats? In that vein, I was going to offer one of my faves, The Streets of San Francisco. Damned if I wouldn’t have sworn the credits showed a cop car going airborne going down one of SF’s streets, but it isn’t in this clip!

But the link is worth it just for the groovy theme music!