So in these passages, God is getting ready to attack the Midianites, but he thinks Gideon has too many men for it to be a real miracle victory. So he tells Gideon to have the men drink from a stream. Some lap up the water and some kneel down and drink. They send the kneelers away and keep the lappers. My factual question is this: why not keep the kneelers instead? It would seem to make more sense to drink that way if you’re at war. Your eyes would still be up and ready to watch for the enemy instead of looking down at the water like a lapper.

Three hundred of them drank from cupped hands, lapping like dogs. All the rest got down on their knees to drink.

Three hundred of them drank from cupped hands, lapping like dogs.

This just clearly shows that today’s dogs are lazy bumblers compared to their Biblical ancestors who could cup their hands to drink.

today’s dogs are lazy bumblers compared to their Biblical ancestors

With the people living to 700, the dogs presumably lived to 100 and could probably learn new tricks until they were 50.

Back on topic then. I feel it might not be a question of lapping being morally better than kneeling. It may have just been an issue of God wanting to minimize the number of soldiers in order to prove that the subsequent victory was a divine act and not just a conventional battle outcome. God had already chosen the smallest clan, the least powerful leader, and told that leader to send home the soldiers who were scared. So when 9700 soldiers kneeled down to drink water and only 300 lapped their water from their hands, God chose the smaller group.

OP linked to the Lego Bible

Did you check out the faces of the lego lappers on the second page? I would not fuck with those guys. I don’t know what’s up with the dude in the middle - all his teeth seem to be smashed, and it’s just making him meaner.

So when 9700 soldiers kneeled down to drink water and only 300 lapped their water from their hands, God chose the smaller group.

He was probably trying to get better odds about the Israelites.

If you’re gonna go, go big I always say. And the Lego Bible has to be a miracle of determination anyway.

Though I think I’ve seen the issue. The good Brick Testament doesn’t include the words

to describe the lappers which apparently the regular Bible does? That would make more sense as a way to keep alert as opposed to kneeling.

With the people living to 700, the dogs presumably lived to 100 and could probably learn new tricks until they were 50. 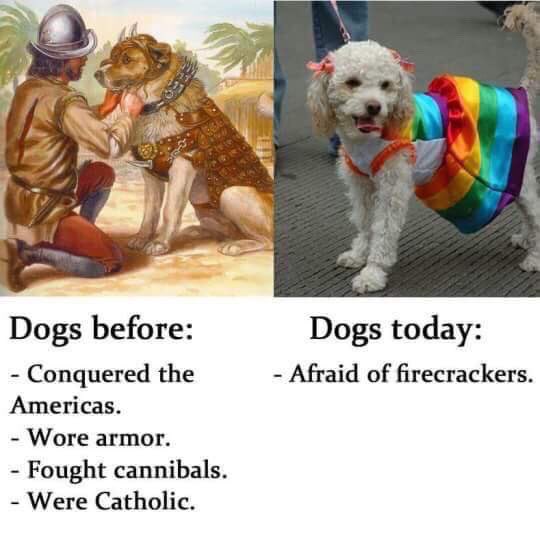 …
The Jewish interpretation, communicated by Rashi*, is evidently far more profound. Gideon, it says, can ascertain the religious antecedents of his men from the way in which they prepare to drink. Idolators were accustomed to pray kneeling before their idols. On this account, kneeling, even as a mere bodily posture, had become unpopular and ominous in Israel and was avoided as much as possible. Hence, he who in order to drink throws himself on his knees, shows thereby, in a perfectly free and natural manner, that this posture is nothing unusual to him; whereas those who have never been accustomed to kneel, feel no need of doing it now, and as naturally refrain from it…

The three hundred - this is what God makes of Gideon to know - have never kneeled before Baal; they are clean men; and with clean vessels, men, and animals, God is accustomed to do wonderful things. Midian’s idolatrous people shall be smitten only by such as have always been free from their idols…
…

It has to do with who kneels easily because they are accustomed to it from idol worship.

This is fascinating! Thanks!
FWIW, in Anglican Sunday school 'way back in the early 1960s, the version we kids were taught was the kneelers were prone to excess–they gulped the water in great greedy quantities. The lappers were more measured, careful drinkers who even when desperately thirsty demonstrated qualities of self-control that would make them better fighters. I draw no parallels to the “Protestant work-ethic” here…

If you want commentary and interpretation of the Hebrew scriptures (“Old Testament”) look to Jewish scholars, ancient and modern. Or at least authorities and experts who are well-versed (hehe) in the original language, customs, politics, history, geography, of the times. The authors of these ancient texts were not modern people with our background of science, philosophy, rational thinking. They saw the world very differently from the way we see it, ways we can’t imagine. We can’t successfully impose a modern worldview on these ancient writings.

Bear in mind that Jewish scholars, at least from the 3rd Century onward, knew very little about warfare.

The way I was taught, the lappers were chosen for two reasons: first, they cared little about social niceties, doing whatever they needed to do in a simple and direct manner, which made them better soldiers. Second, when you kneel, you need two hands to drink water, while if you lie on your belly and lower your face to the stream you can use one hand or no hands at all - which means that you can keep a weapon in your hand at all times. This, again, made them more disciplined and more dangerous.

On the odd chance that anyone is innarrested, here’s an earlier thread from 2013.

It has to do with who kneels easily because they are accustomed to it from idol worship.

On thinking about it, it kind of has to be something like this. It’s not about picking out the best soldiers, because even the best soldiers are even better when backed up by many times as many mediocre soldiers. The only thing that makes sense is that they were the soldiers who were most worthy in the eyes of God, or the like.

On thinking about it, it kind of has to be something like this. It’s not about picking out the best soldiers, because even the best soldiers are even better when backed up by many times as many mediocre soldiers. The only thing that makes sense is that they were the soldiers who were most worthy in the eyes of God, or the like.

Stop trying to insert religion into the Bible, please.

If you\d read the next chapter, you’d see that Gideon routed the enemy using trickery, stealth and psychological warfare. For that, a small elite force has a better chance of success than a large, mediocre force. Gideon’s 300 troops didn’t actually kill any Midianites themselves - they scared the enemy, caused them to attack each other, and a much larger force of “regular” Israelite troops did the actual mopping up. It was a classic special forces operation (although, to be fair, God did provide some sound tactical advice):

Now the camp of Midian lay below him in the valley. 9 During that night the Lord said to Gideon, “Get up, go down against the camp, because I am going to give it into your hands. 10 If you are afraid to attack, go down to the camp with your servant Purah 11 and listen to what they are saying. Afterward, you will be encouraged to attack the camp.” So he and Purah his servant went down to the outposts of the camp. 12 The Midianites, the Amalekites and all the other eastern peoples had settled in the valley, thick as locusts. Their camels could no more be counted than the sand on the seashore.

13 Gideon arrived just as a man was telling a friend his dream. “I had a dream,” he was saying. “A round loaf of barley bread came tumbling into the Midianite camp. It struck the tent with such force that the tent overturned and collapsed.”

14 His friend responded, “This can be nothing other than the sword of Gideon son of Joash, the Israelite. God has given the Midianites and the whole camp into his hands.”

15 When Gideon heard the dream and its interpretation, he bowed down and worshiped. He returned to the camp of Israel and called out, “Get up! The Lord has given the Midianite camp into your hands.” 16 Dividing the three hundred men into three companies, he placed trumpets and empty jars in the hands of all of them, with torches inside.

17 “Watch me,” he told them. “Follow my lead. When I get to the edge of the camp, do exactly as I do. 18 When I and all who are with me blow our trumpets, then from all around the camp blow yours and shout, ‘For the Lord and for Gideon.’”

19 Gideon and the hundred men with him reached the edge of the camp at the beginning of the middle watch, just after they had changed the guard. They blew their trumpets and broke the jars that were in their hands. 20 The three companies blew the trumpets and smashed the jars. Grasping the torches in their left hands and holding in their right hands the trumpets they were to blow, they shouted, “A sword for the Lord and for Gideon!” 21 While each man held his position around the camp, all the Midianites ran, crying out as they fled.

22 When the three hundred trumpets sounded, the Lord caused the men throughout the camp to turn on each other with their swords. The army fled to Beth Shittah toward Zererah as far as the border of Abel Meholah near Tabbath. 23 Israelites from Naphtali, Asher and all Manasseh were called out, and they pursued the Midianites. 24 Gideon sent messengers throughout the hill country of Ephraim, saying, “Come down against the Midianites and seize the waters of the Jordan ahead of them as far as Beth Barah.”

An army, already on edge and terrified of the enemy leader, is awakened in the middle of the night by what seems to be a massive attack from all directions, and everyone starts running about and bumping into each other in the dark - yes, there will definitely be a few “friendly stabbings”. The story didn’t say that they all killed each other, just that it happened enough to increase their panic and cause them to flee.

Stop trying to insert religion into the Bible, please.

i recall a discussion that the whole "don’t mix milk and meat’ kosher rule was because one of the neighbour tribes used a particular recipe - calf cooked in mother’s milk - as a form of sacrifice or religious feast, so the rule was to separate the Israelites from their idolatrous neighbours.

Also the entire story of Lot and his daughters seems to be a long-winded way to insult the ancestry of their neighbouring Moabites and Ammonites and of course, the cities of Sodom and Gomorrah.

So certainly distinguishing those who were steadfast members of the tribe from their questionable neighbours was an important issue. (Recall too, Herod went to pains to try to make himself appear to be a true Hebrew despite his questionable ancestry)