A question about microwave ovens

I’m sure this has been asked before, though I couldn’t find anything. If so, I apologize.

I’m just wondering what causes this disparity. It seems to vary from food to food, though perhaps the container has something to do with it as well. But i’m not talking about any container that has those heating strips meant to get hot in the microwave to cook food faster (often found in tv dinners).

Microwaves work by heating up mainly water inside the food. The water it can heat up directly depends on the depth the microwave can penetrate the food, which also depends greatly on the moisture content of the food.

The way I always explain it is that microwaves cook from the inside out from the outside in. Which is confusing. But this is what it means.

A regular oven cooks by conducting heat into the food, so all of the cooking is from the outside in. A microwave uses radio waves which penetrate into the food and excite molecules (mostly polar molecules like water and some sugars and fats). So rather than the heat just being conducted into the food, the heat is actually generated inside the food. This is the “from the inside out” part.

Microwaves also penetrate into the food, and they only penetrate so far. This is the “from the outside in” part of it.

ETA: Those heating strips are a metalized film. The microwave radio waves induce eddy currents into the film which makes it hot, and the heat is transferred to the food using simple conduction, like in a regular oven. 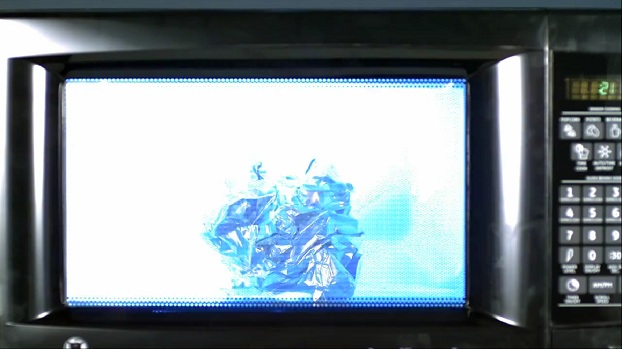 Microwave ovens are popular because they cook food in an amazingly short amount of time. They are also extremely efficient in their use of electricity because a microwave oven heats only the food -- and nothing else.

Waves in this frequency range have an interesting property: They’re absorbed by water, fats and sugars. Once absorbed, they’re converted directly into atomic motion – heat. These waves boast another interesting, related property, too: They’re not absorbed by most plastics, glass or ceramics. Metal reflects microwaves, which is why metal pans don’t work well in a microwave oven. It’s also why the devices have metal walls – for reflection.

Yea, the microwaves excite the water molecules causing heat. I get that part. I just don’t get the disparity in how one type of food gets warm in the inside and another is the total opposite. both are seemingly high in water content.

Put a pint of ben and jerry’s in the microwave for 30 seconds or so and the middle will be soft while the outsides are still frozen. Put some ketchup on a plate and the outside edges are what heat up.

The “from the inside out” observation is often the result of a product that has an outside layer which, due to density, does not heat up quickly, and an inside filling that does. It’s not the placement that determines the rate of heat, but the density.

Yea, the microwaves excite the water molecules causing heat. I get that part. I just don’t get the disparity in how one type of food gets warm in the inside and another is the total opposite. both are seemingly high in water content.

Put a pint of ben and jerry’s in the microwave for 30 seconds or so and the middle will be soft while the outsides are still frozen. Put some ketchup on a plate and the outside edges are what heat up.

There’s a phenomenon called “thermal runaway.” Some materials are more microwave-absorbent when warm than when cold. You may also be dealing with inhomogenous ice cream, i.e. one with nuts or chocolate chunks or something that is more microwave-absorbent than the surrounding ice cream. So you develop a hot spot somewhere in the ice cream block, and then that hot spot is even more absorptive, so it captures more of the incident microwave energy. Pretty soon you’ve got scalding hot liquid cream sitting next to rock-solid ice cream.

The same thing often happens when you put other frozen foods in the microwave and try to thaw them quickly: one spot thaws, and then cooks, while the rest of your food item is still icy cold. The defrost setting works by blasting your food with full strength microwaves for a few seconds, then shutting the magnetron off for several seconds, allowing any localized heat to conduct out to the colder parts of your food. This blast-pause cycle continues until your food is more or less evenly thawed.

Another thing is that microwave ovens set up standing waves inside the box, which leads to hot spots and cold spots in the microwave.

Microwave ovens often have a rotating platter which helps to move the food around in and out of those hot spots to give a more uniform heating. If your microwave doesn’t rotate or the container is too big to rotate you may notice hot and cold spots in your food.

As for ice cream, I suspect that the ice cream near the outer surfaces of the box may have thawed and frozen a bit which could affects how quickly it melts in those areas.

Mine does have a rotating platter, but there are still often hot spots (usually 6cm or so apart from each other due to the wavelength).

I always put icecream in the microwave for 20-30 secs straight out of the freezer. I hate it when it’s rock hard. I like to soften it a bit by warming it up. But it never warms up evenly. the inside always melts the most, along with one random spot on the top, in the 8 o’clock position when facing the round container directly in front of the microwave. No clue why it’s always in that same position even though it rotates.

There’s a phenomenon called “thermal runaway.” Some materials are more microwave-absorbent when warm than when cold.

In particular, liquid water is more absorbent than ice. Since water and ice are quite common in microwaved foods, this one shows up a lot.