Adele sweeps the Grammys for 2012

Six wins. Including Record, Album, and Song of the Year.

Great job. They say that ties her with Beyonce as the most wins by a woman in one evening. All I know is I just can’t get enough of this woman’s music. There isn’t a day that goes by without me playing 21. Incredible album.
Love this picture of Adele holding all six Grammys. 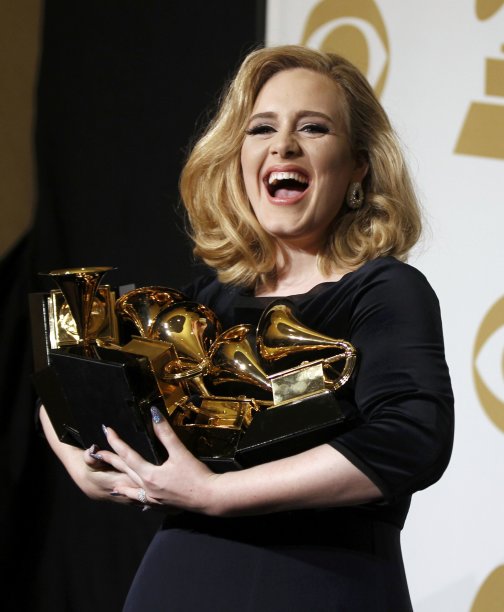 Adele, who captured the world’s heart with an album about a broken romance, emerged as the top winner at Sunday’s Grammy Awards, winning six trophies including the prestigious trifecta of record, song and album of the year.

Just minutes earlier, she and songwriting partner Paul Epworth won the song of the year Grammy for their collaboration on the song.

Adele thanked her doctors "who brought my voice back" as she accepted one of six Grammy awards Sunday night.

I don’t have a whole lot to say about Adele, she did great, and I think she earned her awards.

I’m a huge Foo fan, and was very happy to see them more than once - though sad they were the sole representation of the alt/rock scene. Seems to be a shrinking genre every day.

I really enjoyed the show this year. They finally figured out people watched mostly for the entertainment, not the thank-you speeches, and that people can just look up what’s important to them online these days. Last year was a great show, as was this one, finally. I had stopped watching for a long time because they had gotten stale. I think the last one I remember before last year was whatever year Ricky Martin had his breakout performance. A long time!

And I can’t believe Gaga kept that thing on her face the whole time. (well, I guess I can, but it sure didn’t look comfortable)