The downstairs tenant smokes, tobacco and weed. The weed smell I don’t mind

, but the tobacco smell is killing me. I’m thinking about buying some form of air purifier from Brookstone or something. My concern is that these things are little more than the technological equivalent of snake oil. Am I right in this line of thinking?

If I’m wrong, can anyone recommend a good one?

Further- besides incense, keeping the windows open, etc. is there a fool-proof method for defeating this smell? My [del]head shop[/del] novelties store sells these candles that purportedly kill the smell of tobacco smoke. Do those work?

I use a hepa filter and have noticed a difference, but that’s due to elimination of dust (and sneezing). Cleaning the room also helps, not during the cleaning, but after, as does keeping the window open.

You have a different issue and don’t know if such a filter would be very useful. I believe ion exchange filters would be better, and ozone generators for smoke abatement. Other things you can try is somehow have your apartment have positive air pressure, and seal up any channels of air infiltration to your neighbor.

I believe Hepa air filters are not snake oil and actually work well for what they are designed for. Whether they will remove smoke smell, I do not know.

When in doubt, I follow the industry. They don’t use ions or water, just huge filters. I think there’s no shortcut to filter size, so I don’t trust tiny purifiers. This is what my air purifier’s filter looked like after a wave of air pollution: 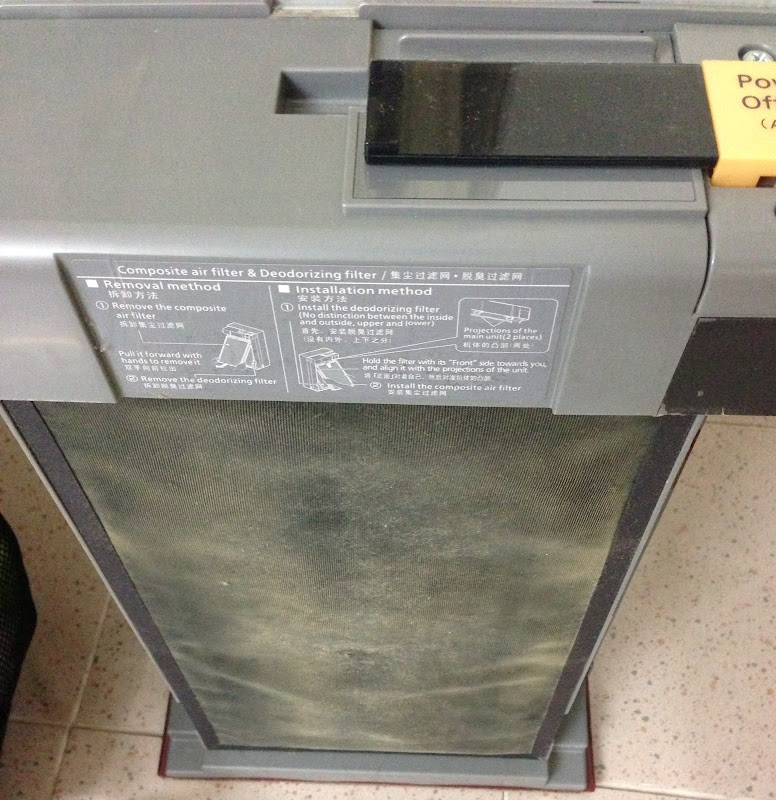 And half vacuumed: https://lh4.googleusercontent.com/-agFvTn1oDQE/UcUnyGnmL_I/AAAAAAABS9U/KoSUOgHEqmo/s800/CIMG3635.JPG
For choosing one, I advise you to ask what maintenance is needed, e.g. I have to vacuum mine every 2 weeks. The filter lasts 2 years. If the maintenance is suspiciously low or none, it can’t possibly be filtering well.
For a smaller investment, you can try a disposable filter like 3M’s Filtrete: http://www.amazon.com/Filtrete-Conditioner-15-Inch-24-Inch-9808-12/dp/B000BO96IW/ref=sr_1_2?ie=UTF8&qid=1381333210&sr=8-2&keywords=3m+filtrete They work pretty well for dust - a bit too well, since mine always turns dark grey in less than a week. Not sure how they do for smell, though.

many filter systems would remove particulates, the stuff you see as smoke.

the odor may be getting to you but lots of particles may not.

so common consumer filters may not be of use for being distant from the smoke source.

masking the smell is its own stink.

If the maintenance is suspiciously low or none, it can’t possibly be filtering well.

That’s not necessarily true. It may be filtering terrific (filters tend to increase in efficiency as they get clogged up) , but you’re putting a lot more load on your fan motor and using more electricity because of reduced airflow.

I’d look at the electrostatic air cleaners; they pretty much filter everything out, and you just have to rinse off the plates every so often.

That’s not necessarily true. It may be filtering terrific (filters tend to increase in efficiency as they get clogged up) , but you’re putting a lot more load on your fan motor and using more electricity because of reduced airflow.

I’d look at the electrostatic air cleaners; they pretty much filter everything out, and you just have to rinse off the plates every so often.

I mean, if they say you only have to wash the filters every 6 months or the filters don’t need any maintenance at all throughout the life of the machine, either the machine won’t last long, or it isn’t doing much filtering. It’s like a vacuum cleaner. Also, you want to make sure maintenance is easy and doesn’t have any hidden costs.

Oh, I’ve also read to check the seals between the filter and the unit. Bad designs have poor sealing and allow air to bypass the filter.

When in doubt, I follow the industry. They don’t use ions or water, just huge filters…

I though the hotel industry uses ozone generators, not filters, to clean out smoke in a hotel room.

The ionic filters such as Brookstone sells do nearly nothing other than remove particulates in the immediate area of the “purifier”. I remember reading a testing report that pretty much called them all useless.

I dug up a link to a Consumer Reports review (warning:PDF) of quite a few models from 2007. It was moderately enlightening.

Ozone generators definitely do work at getting some odors out, but I wouldn’t want one running in an area I was breathing in and I don’t think it would do much good if the downstairs tenant is making more odors constantly.

I though the hotel industry uses ozone generators, not filters, to clean out smoke in a hotel room.

I was thinking more cleanrooms and hospitals, where air quality is measured. They just use filtration all the way.

I have a number of different kinds of air filters. A HEPA filter with a fan is the way to go. I run the fan during the day before I go to bed, and sleep so much easier.

Is the smell seeping up through the floor? Or is it coming out into the common hallway and coming in around your front door? If the former, I don’t have much. If the latter, you may be able to add some sealing to your front door - and if neighbor is approachable, maybe his door too.

My only issue has been through the hallway and front door. Positive air pressure works well, either with air conditioners running or with window fans blowing inward, but those only work under conditions where the weather is cooperating with the method. Luckily for me, it’s only weed and I don’t mind it at all. If it was tobacco, I really think I would raise hell somehow.

If neighbor is nice and approachable at all, any chance of asking him to smoke the tobacco outside, or to use a filter machine himself when lighting up?

Ozone is used all the time by industry to remove odour, especially smoke. We have a room at work where smoke damaged goods are ozone treated. We stay out of that room while the generator is active ;), so I do not know how effective it is at the levels created by consumer ozone air cleaners.

A friend that was growing pot used an air ionizer to help control odours he told me he kept paper underneath where a significant amount of gunk would precipitate, so something was happening there.

I’ve had good luck with Rabbit Air’s MinusA2 SPA-700A. It may be a whole lot more than you want to spend ($460 at Amazon), but as a smoker myself, I decided it was a worthwhile investment. They offer a variety of filter combinations, depending on what you’re trying to eliminate (odors, allergens, etc). You would obviously notice if you were in the same room with me, while I was actually smoking a cigarette, but the odor doesn’t linger or spread out much (per my non-smoking brother). The unit has a sensor, and will automatically rev up a couple of notches as ambient air quality requires. Otherwise, it’s relatively quiet. You can stand it on the floor or hang it on a wall, if you’re so inclined.

Back when I was in college and smoked in my bedroom I had a small HEPA filter. I left it running most of the time, just turned it off at night because it was loud.
I could always tell if people smoked in my room without it because I’d come home from school and the room would stink. If they left it running I couldn’t smell anything, it just smelled like the rest of the apartment. Cigarettes were only smoked in my room because none of the other roommates smoked but some of the girlfriends did.

It made a huge difference.