I just saw a clip from the new Jodie Foster film, Flightplan, in which she goes into an airliner lavatory, opens a panel in the ceiling, and climbs up into a big, open empty space above the passenger cabin. The same thing was depicted in the action film Executive Decision.

IANA aeronautical engineer, but it seems to me that it would be extremely poor design to have so much unused space in any airplane that is supposed to operate efficiently and make money for its owner.

Am I right in thinking this is pure Hollywood plot device, and that no real airliners have false ceilings and empty crawl spaces overhead?

Well, this is just a WAG but maybe it’s there because the hull has to be aerodynamic?

The gain from a better shape would most likely outmatch the fuel cost for the extra wall materials.

What type of plane was it?

Boeing Commercial Airplanes offers airplanes and services that deliver superior design, efficiency and value to customers around the world.

Fly-Jet.com is for sale | HugeDomains

Start your new business venture with a great domain name. A trusted source for domains since 2005.

Busted up planes, you can see a few fuselage sections in some of the pics: 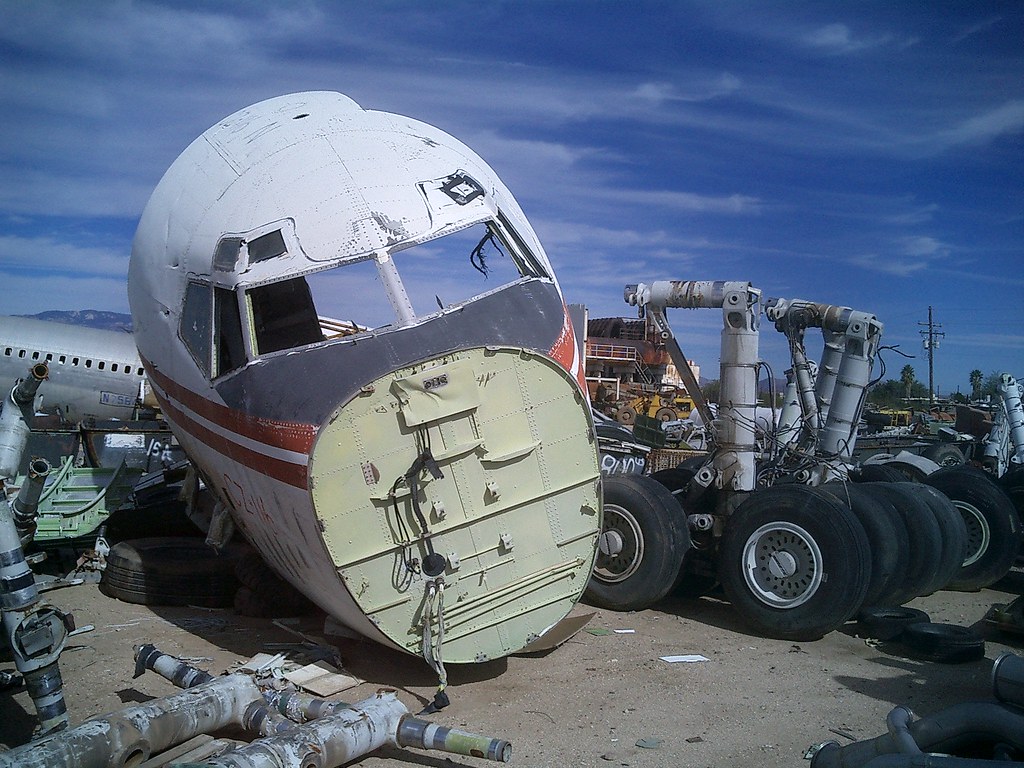 Every plane I’ve been on has had a cross section like the 757 in the above link. Definately no crawl space.

I believe on some planes if you remove a panel or two you might be able to get into the cargo area underneath the passenger compartment.

I suspect it’s one of those “Hollywood plot devices” specially installed just for filming the movie.

Due to the need for an aerodynamic shape and streamlining, voids do occur in airplanes. However, there’s a tendency to fill them up with “accessories” like wiring and plumbing and stuff. Also, in a passenger jet, there’s the matter of the “pressure vessel” - that’s the part kept at reasonable pressures and temperatures for human beings. Voids in, say, the wings and near the tail will be outside of this pressure vessel, and (one would hope!) not accessible from inside the passenger area.

Which is about the extent of my knowledge here, and I won’t guarantee it’s 100% correct. Maybe one of the jet pilots around here will show up and enlighten us further.

engineer_comp_geek, I think those may be two misleading examples. The 757 is not a widebody plane and the 747 cross sections show the upper cabin which is much narrower at the top. I’m not saying a widebody (I’m presuming the movie portrays an A380) has a crawlspace but you can’t determine that from the examples given.

Airline pilot here. No crawlspace … yet.

In a narrow-body or even a single-deck widebody like 767, A330/340, or a 747 aft of the hump, the fusleage cross section is roughly cylindrical, but the passenger cabin wants to have a flat ceiling for aesthetics, as well as having the ceiling be at a reasonable height above the floor.

Meanwhile. there are a lot of wiring, plumbing and mostly air ducting that have to be routed someplace. The area below decks is broken up by wings, cargo compartments, cargo doors, landing gear, etc. So generally anything that has to run much of the length of the plane ends up in the overhead.

There are certainly nooks and crannys here & there one could hide in, if one could get the ceiling panels down. But there’s not a longitudinal crawlspace one could use for getting from one end to the other.

As airplanes get bigger, the space up there (and below decks too) grows faster than the need for it. On the A380 there is talk of building a few private bunk compartments, like on a railroad sleeper car. There’s also the idea of a small space for a few crewmembers to take turns napping; you can’t fly a 12-16 hour flight and still be sharp enough to be safe at landing if you spend it all strapped into your seat.

So yes, there is an intent to turn any available cubic footage into something useful. Engineering spaces if need be, revenue generating spaces if not.

And no, I haven’t seen the movie.

I think however, for the movie she was the one who designed the plane and it’s huge, as in there are two floors that run the length of the plane. That’s why she knows where to go.

I just saw a clip from the new Jodie Foster film, Flightplan, in which she goes into an airliner lavatory, opens a panel in the ceiling, and climbs up into a big, open empty space above the passenger cabin. The same thing was depicted in the action film Executive Decision.

How about a spoiler warning? Some of us like to have the plot line of a movie unfold without prior knowledge.

Sorry, but it seems to me that if they’re showing clips on Letterman, they’ve done the spoiling. Anyway, I don’t think it’s a major revelation.

And Executive Decision was released in 1996. Isn’t there a statute of limitations for spoilers?

But if a mod feels strongly about it, I suppose the OP could be edited to say something like, “In several films a character climbs up…” etc.

I haven’t seen the movie but from the description, the area above the passenger compartment of the Boeing 777 is a big open area. I could easily stand on the top of an 8 foot ladder and not hit my head on the top of the fuselage. And from what I have seen on the inside of a 747 behind the second deck, it is possible too. Both airplanes have easily 14 feet between the passenger floor to the top of the fuselage. When I worked on the 777, I used to perform a functional test that required me to climb into the upper fuselage and test wiring to various equipment located up there. It is a maze of air ducts and large tie rods used to support the aircraft ceilings and mounting grids. The center stowbins and lighting assemblies are mounted to the mounting grids. Newer 777’s now have crew rests located in the upper fuselage. The cross section drawings reference by engineer_comp_geek are not to drawn to actual size. Boeing is very secretive when it comes to their engineering drawings, I am warned everytime I log onto BOLD/REDARS*, that there can be some serious consequences to releasing the info contained therein to those that don’t need the info.
*Boeing Online Drawings/Reference Engineering Data Automated Retrieval System

I work in the airline industry…the 747 and 777 both have a surprising amount of overhead room. They both have designs where flight crew bunks, berths (up to 10 I think), and rest areas are placed. Space is a bit cramped and you can’t stand full height though (think of being in a submarine crew berth) but there is quite a lot of room.

The official corporate site for the world's largest aerospace company and leading manufacturer of commercial jetliners and defense, space and security systems. Learn about our passion for innovation, our products, careers and more.

Are you sure she wasn’t getting into the air duct system from the furnace/air conditioner?

(It looks like the writers are just using the same gimmick they use in buildings. Wouldn’t the world be more interesting if it was built along the lines of a screenwriter’s imagination? Manhole covers that weigh 10 pounds, etc.)

In a narrow-body or even a single-deck widebody like 767, A330/340, or a 747 aft of the hump, the fusleage cross section is roughly cylindrical, but the passenger cabin wants to have a flat ceiling for aesthetics, as well as having the ceiling be at a reasonable height above the floor.

“Reasonable height?” I thought is was so that tall people hit their heads when standing up in all but the biggest planes… (pet peeve) I was on three different airplanes last weekend and couldn’t stand up in any of them.

Bear in mind, also, that we are talking about Jodie Foster fitting into the space. Crowded for me would be the Astrodome for her.

“Reasonable height?” I thought is was so that tall people hit their heads when standing up in all but the biggest planes… (pet peeve) I was on three different airplanes last weekend and couldn’t stand up in any of them.

Thanks for the replies. I gotta say that the blue areas above the cabin in the drawings in Pjen’s link, if they were completely empty of wires, ducts, pipes and other engineering thingies, bear a striking resemblance to the spaces depicted in the movies.

The truth may not be as cooperative: there may be crew rest areas or some engineering hardware taking up part of the space. But there could actually be a germ of truth to this plot device. Frankly, I’m surprised.

How about a spoiler warning? Some of us like to have the plot line of a movie unfold without prior knowledge.

That doesn’t seem like such a spoiler. The previews spoil as much as anyone does these days. Nothing was said about why she did that, and if she found what she was going up there for.

They don’t fly those big planes into the airports around here. I’m 6’4" and I hit my head on just about any plane that flies into Billings (MT) or Cody (WY). Even the big planes often have monitors or something hanging from the ceilings.

Spoilers? Common. What airplane movie doesn’t have someone:
-crawl through the dorsal crawl space
-open the secret lavatory hatch to the cargo deck
or
-escape/enter through the wheel well hatch