in this case evidence gathered at tax payer expense

That’s a fair summary of pretty much all information held by the government about individuals, including tax records, business records, school records…

Apparently an armorer on some other prior movie wanted actors to get practice firing live rounds to experience the recoil, okay.

Then why not take them to a local shooting range and use live ammo obtained from the local sporting goods store? Keep the live ammo entirely off-set.

Starline was the maker of the brass cartridge. That is an empty shell which someone (a “reloader”) can use to make live rounds, dummy rounds, or blank rounds as needed.

Googling the company, you are obviously correct that they make the empty cartridge cases, which users can then make into any type of round.

Whereas the article said this, including a direct quote from the lead detective:

Starline Brass is the dummy round of choice for movie sets.

That’s very misleading. That’s purportedly a direct quote from Hancock, the lead detective. Although what she said is technically true, it strongly implies that she thinks Starline Brass make dummy rounds, not empty cartridge cases that can be used for any purpose. And that’s the implication of the entire article. I hope this is just poor reporting.

The first sentence you quoted from the article is wrong and unsourced, so there is definitely some bad reporting.

I don’t know what point Hancock was making when she said that but she is correct that Starline doesn’t make live ammo. Starline also doesn’t make dummy rounds or blanks so the person handling the rounds needs to know what has been put in them. They can’t draw any conclusions about a cartridge based solely on the fact that it’s in Starline brass.

I’m not watching the whole video to find Hancock’s quote and figure out the context. I don’t know whether she was mistaken, intentionally misled the subject of the questioning, or implied something that both understood clearly in context even if it was misconstrued by others (like the article’s author) later. It’s also possible the detective understood Starline’s product line fully, said something inartful about it, and was thoroughly misunderstood by the generally incompetent armorer who should have known better.

Reloading cartridges is cheaper than buying factory ammunition, particularly because the brass cartridge is the most expensive part and can be used many times.

I wonder about this. While it is true for the gun enthusiast who shoots many thousands of rounds a year and considers his time doing something he enjoys basically free while buying factory ammunition is going to have a substantial out of pocket cost is it true when you have to pay professionals a serious hourly wage plus benefits to do the reloading?

There are few commercial makers of blanks, and most of those factories that do, make them for military users, in a limited range of types. Historical movies require types which are not going to be available off the shelf, and the specific requirements of a film set mean paying a semi-pro movie services firm to make up a small quantity. The noise and muzzle blast on an interior set has to be kept down to tolerable levels (the sound will be dubbed on in post-production anyway) so loads which produce a modest amount of both may be needed.
The huge clouds of white smoke which the guns of the Frontier era produced would mean an interior set would be fogged up after one or two takes.

Starline makes revolver brass that is actually marked “BLANK”. they have an enlarged flash hole so the primer does not back out and jam the revolvers action.

An article about the issue which puzzles some of us the most:

'Rust' Investigation: Where Did the Live Round Come From? - Variety

Way earlier in this thread I said it seemed that the original live rounds came from Thell Reed, as he told police that he had made live rounds with Starline brass and that Kenny had kept (stole) them after they used them for practice on a different movie. Kenny then supplied “blanks” for the Rust movie. Now, Kenny has named another guy, Joe Swanson, as being in possession of them. How he got them and how they got to the set is up in the air, as Swanson won’t talk to police.

But can someone explain to me why on earth he would have taken a distinctive brand (Starline Brass) that make only dummy rounds for movies, and “reloaded” them to convert them to live rounds?

Starline doesn’t sell dummy rounds, all they sell is the brass cartridge case. No primer, no powder and no bullet. As sold, they are actually useless, even on a movie set. No primer so you can’t use them as blanks. No bullet so you can’t use them just for appearances. Once you buy the casing, you can do anything you want with them, including loading live ammo. In Starline’s case, nobody “reloads” them because they are never loaded in the first place. Many people that use a lot of ammo load their own to save money or just because they can.

The problem seems to be that some of the Starline brass was made into live rounds and some into dummy rounds and the people who handled the weapons seemed not to have been able to distinguish them when it mattered.

I thought it was bad enough in the early news that the armorer would mistake a dummy or blank for a live round, but now the news stories say that the primers were different colors also. So even another big visual clue that the armorer missed.

Is there really any public interest (as distinct from ‘what the public is interested in’) in releasing this raw footage of peoples’ distress?

The reason I saw given was a Freedom of Information filing by news sources. I’m no expert, but I think once a judge rules that you have to hand it over, you hand it over. Why any news source felt they should release the footage of the paramedics taking off Halyna’s clothes while trying to revive her, I don’t know. Nobody needed to see that, especially her family.

I was hoping they’d release autopsy report (no photos) describing Halyna’s wound Why did a shot through the arm pit kill her? She received very quick medical care. Med flight to the hospital. I guess this could have gone either way?

Reports haven’t been clear. I have the impression she made it to the hospital alive.

If the shot hit a major blood vessel she might have bled out. If the docs can’t find and plug the hole fast enough, then replaced lost blood fast enough, it can be fatal.

That’s a good point. Trauma centers save a lot of people, but there’s always going to be fatalities.

Joel Souza is very fortunate to be recovering and probably looking for more work.

But can someone explain to me why on earth he would have taken a distinctive brand (Starline Brass) that make only dummy rounds for movies, and “reloaded” them to convert them to live rounds? Aside from the obvious stupidity, isn’t it just a lot of work to do that manually, rather than just buying off-the-shelf live rounds? Is it because they make the dummies in an obsolete caliber for antique guns or something like that?

This is exactly the question I have. .45 is one of the most common calibers on the market. Before the ammo shortage I could have walked into any Bass Pro Shop and bought a case of a thousand rounds any day of the week. Now I would likely be limited to 100 rds to preserve stock for other customers, but still.

On further thought I can see what the though process might have been. I’m in my shop and I know I’ll only be needing 20 or so rounds. The .45 dies are already mounted and the bullets and cases are right here. I’ll take 2 minutes to disassemble the prop rounds and 10 minutes to run them through the reloading press.

Note these are long estimates. A skilled reloader could do it in less time.

I’ll take 2 minutes to disassemble the prop rounds and 10 minutes to run them through the reloading press.

There’s no reason to think it happened this way. Starline only produces brass, it’s totally useless as it lacks primer, powder and the bullet. You start with the Starline brass and you can make whatever you want- blank, dummy round or live round.

At this point it’s a bit silly to talk about following rules, but the one rule everyone seems to agree on is no live rounds are allowed on set. If the armorer knew there were live rounds on the set, which she denies, she should have immediately removed them, not tried to disassemble them to use as blanks. As you pointed out brass is cheap and plentiful, no reason to repurpose live rounds.

To quote myself from above:

Way earlier in this thread I said it seemed that the original live rounds came from Thell Reed, as he told police that he had made live rounds with Starline brass and that Kenny had kept (stole) them after they used them for practice on a different movie. Kenny then supplied “blanks” for the Rust movie. Now, Kenny has named another guy, Joe Swanson, as being in possession of them. How he got them and how they got to the set is up in the air, as Swanson won’t talk to police.

If the shot hit a major blood vessel she might have bled out. If the docs can’t find and plug the hole fast enough, then replaced lost blood fast enough, it can be fatal.

I think it’s quite probable she was already dead before evac arrived. The angle of the shot as described would put the wound path thru both lungs and possibly the heart. That’s a lot of internal bleeding. That doesn’t mean the EMTs weren’t doing everything in their power to save her, but there must have been quite a bit of time between her being shot and arriving at the hospital.

I had been thinking the Alec would now limit himself solely to acting (so he wouldn’t have responsibility at all if something went wrong with a production), but no: 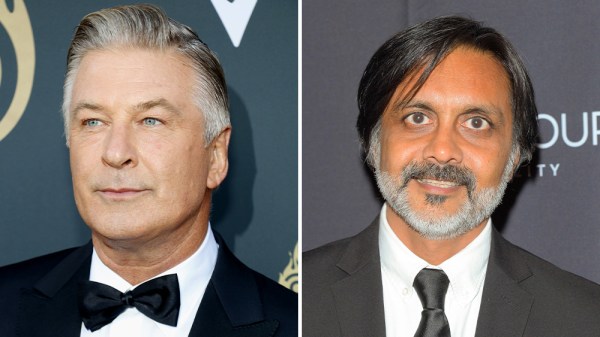 EXCLUSIVE: Alec Baldwin has partnered with veteran actor and producer Anjul Nigam (Grey’s Anatomy) to form film and TV production company Persona Entertainment, whose first project will be on…

Yes I’m morbidly curious but I don’t think my curiosity should be satisfied.

So well said. As artist Jenny Holzer put it, “protect me from what I want.”