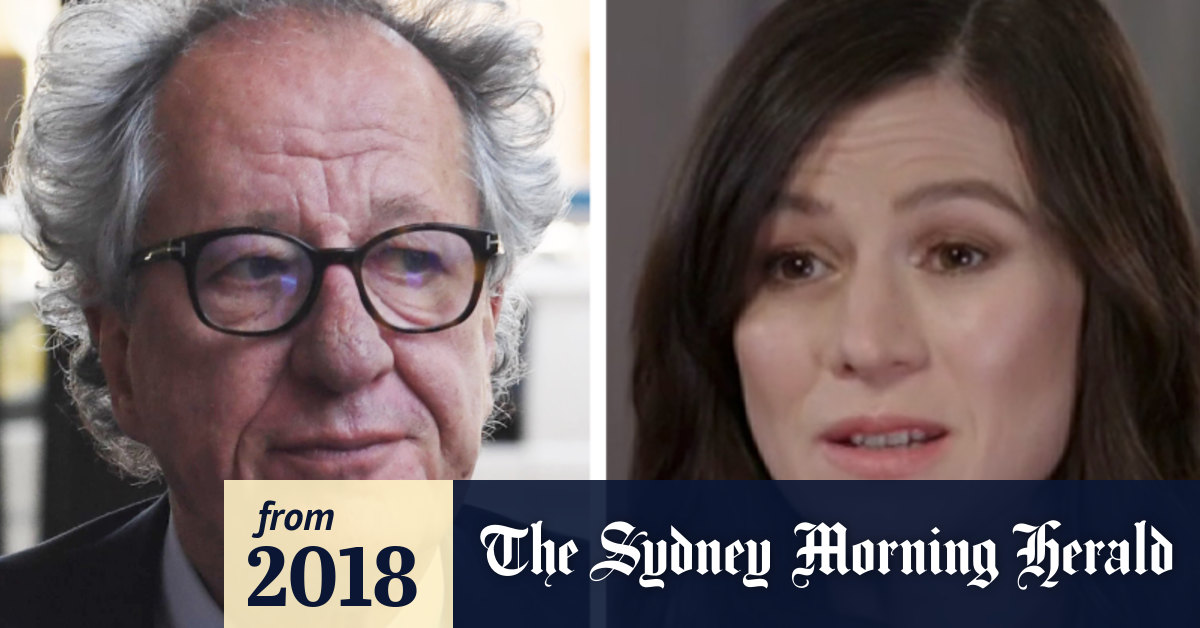 This shame isn't for the young and powerless to bear, it's not ours

Despite popular opinion, fame and money are rarely the rewards for making sexual harassment allegations.

Allegations (from actress Yael Stone) include the following:

*That Rush almost immediately began sending her a series of inappropriate and sexualised text messages, dressed up in what she called “high falutin language”.

*That Rush invaded her personal space in their shared dressing room, including requesting that she help remove his sweaty costume and once crawling underneath the dressing table to sleep next to her while she napped between performances.

*That he once stripped off his clothes and danced naked in front of her, without her permission.

*That he held a shaving mirror over a shower cubicle to spy on her while she was showering inside.

According to the article, several friends and family of the actress confirm that she told them about these instances at the time they occurred, and her diary entries also corroborate them.

Rush has denied the allegations, and offered the following apology: “Clearly Yael has been upset on occasion by the spirited enthusiasm I generally bring to my work. I sincerely and deeply regret if I have caused her any distress. This, most certainly, has never been my intention.”

That’s one of the most pathetic non-apologies I’ve ever seen for this sort of accusation.

Fuck each and every last harasser and abuser out there. Even the enormously talented ones.

I am not proud of this, but I have to admit it makes me giggle a bit to imagine the “spirited enthusiasm” that the ol’ boy undoubtedly exhibited while furiously mashing his monkey wilst deftly holding up a shaving mirror with his unoccupied hand to peep in on his showering coworker, some 35 years his junior.

What a creepy old asshole.

I mean, who of us hasn’t stripped naked and danced in front of a coworker?

I mean, who of us hasn’t stripped naked and danced in front of a coworker?

Rush has denied the allegations, and offered the following apology: “Clearly Yael has been upset on occasion by the spirited enthusiasm I generally bring to my work. I sincerely and deeply regret if I have caused her any distress. This, most certainly, has never been my intention.”

That doesn’t even sound like a denial. It sounds like he’s saying “Yeah, it happened, but I didn’t mean it in the way she took it.”

I despise sexual harassment/abuse, especially when coercion is implied because the abuser is richer in terms of strength or money or authority or prestige or et cetera, and I’m depressed at having to think less of someone I kind of liked, but I am posting to say (1) I honestly thought “high-falutin’”(and I think the hyphen and apostrophe are correct) was an Americanism and was very surprised to see it emitted by an Austrailian, and (2) I had to laugh at Rush’s “my work,” as if he thought that was part of what he was being paid for.

This is not the first allegation against him. I didn’t know who he was, so I looked him up. In his wiki, there’s this:

On 30 November 2017, the Sydney tabloid newspaper The Daily Telegraph published a front-page article alleging that Rush engaged in “inappropriate behaviour” onstage with a co-star during the Sydney Theatre Company’s 2015 production of King Lear. The story contained no corroboration for the allegations, though the STC divulged to the Telegraph that they had received a complaint about alleged sexual harassment by Rush. Eryn Jean Norvill, who had starred as Cordelia alongside Rush, alleged that the actor had touched her inappropriately without her consent and that he had followed her into a toilet during an after-party
. . .
After Norvill’s testimony, actor Mark Winter testified in support of Norvill, before the defense rested their case. In closing arguments, Rush’s attorneys presented the case that the journalist, Jonathan Moran, was looking for “a Weinstein story” and was “motivated by malice.” The trial was concluded on November 9. A decision is expected at the beginning of 2019.

Rush filed a defamation suit against the publication alleging inappropriate behavior. Their defense was truth.

It looks like this new allegation might be partially in defense of that case because of the timing.

Huh, for some reason I always assumed Rush was gay.

So I haven’t seen or watched the Stone interview, but I assume that her motive in coming forward was to support Eryn Norville, who has been treated appallingly by basically everyone involved in this case, male or female. This is basically the timeline:

*King Lear production - Rush does whatever it is that he does, depending on whose story you believe (and FTR, after following this case since the beginning I believe all of Eryn’s story and none of anyone who contradicts her)

*Eryn makes an OFF THE RECORD complaint to the Sydney Theatre Company with the purpose of shutting down future occurrences that other young actresses might have to suffer through. She also lets off steam with a couple of her friends.

*Telegraph gets wind of potential scandal. Runs big front page splash about Rush being a sleazebag without naming who he’s supposed to have harassed. And the reason why they don’t name her is that they never actually talked to her - or, really, did any proper fact checking of the story, which they used one of Norville’s aforementioned friends as a source for.

*Rush sues Telegraph for defamation. Norville comes forward for the defence - pretty reluctantly as far as I can see, since a huge media circus was exactly what she was trying to avoid. Entire Australian theatre establishment comes forward and lies their heads off for Rush, who’s a HUGE star in Australian terms, probably the biggest name in the entire theatre scene. The judge is still deliberating.

Honestly, I do feel somewhat sorry for Rush, who I’m pretty sure was never malicious, and has skipped through his happy successful life blithely assuming that just because HE was having fun everybody ELSE was having fun too. And is now getting a very nasty wakeup call. But it’s nothing to what I feel about Eryn Norville, whose story was used to make a quick buck by a paper which clearly gave not a single fuck about her actual interests, and whose career has been put through the shredder after her having done absolutely nothing wrong.

It looks like this new allegation might be partially in defense of** that case** because of the timing.

…to be pedantic: Stone didn’t come forward in defense of “that case.” The Daily Telegraph didn’t need her defense. She came forward in defense of Eryn Jean Norvill. The Daily Telegraph put Norvill in the spotlight without her permission and as a result she found herself under scrutiny and under attack from “theusualsuspects.” The whole business is an absolute disgrace.