The production would have been raked over the coals online had our plucky band of adventurers been depicted as they were in the book.

Right, I’ve seen a couple of thought piece articles about how this show is anti-trans since there are male powers and female powers but no scale in-between.

If this first season had been all white, which between EF, Caemlyn, and Shinar it could have been then it would have been destroyed even with a girl power angle and the world opening up to more colors as the show went on.

In the first book the closest to even a Mediterranean skin tone would be on someone like Bayle Domon and his crew. Elias’ race doesn’t mater so he could be dark skinned but he’s a wild man and having one of your few black guys be a savage who is close to beast is probably a no go. Min would have been a good opportunity to be black but she has a very minor role in book 1. Thom’s race doesn’t mater though he is from Caemlyn so it would be hard to drift too far if you want to be able to tell them by sight. I would have made the boarderlanders Asain but I’m not sure that is far enough from white for diversity purposes.

So, it would be difficult until they move on to the great hunt and the Aiel to have good people of color on the show. It makes total sense then to just make things more diverse rather than wait for the world to open up organically.

So, it would be difficult until they move on to the great hunt and the Aiel to have good people of color on the show.

Redheads are “people of color”? I guess they are, technically, but I think most people would think of the Aiel as being very, very white.

Sure, but as I said earlier you could make the Aiel black and not change anything about the story. Red-haired isn’t nearly as important as visibly different. You could change every instance or red hair to black skin without changing the story

On the plus side, each of the nationalities are also clearly distinct in fashion and custom; it could be a good way for viewers to mark folks out at a glance the way in-universe characters can (Tarabon and silly veils and handlebar mustaches (men) and hair with a multitude of braids (women), Domani and super-form-fitting, sheer dresses (women) and “beauty marks” (men), etc…) rather than using the combination of physical traits like skin/eye/hair color.

And every Illianer had better talk like a bad pirate!

On the plus side, each of the nationalities are also clearly distinct in fashion and custom;

Of course, this doesn’t help the Rand situation since his dress and custom is two rivers but his body is other.

As much as I’m taking about it I have faith that Sanderson is a good enough writer and a big enough fan to translate this correctly to the screen.

Lan is Shienaran, and as Alessan notes, Shienar is very heavily influenced by daimyo -era Japan; castle-dwelling warriors with a love of poetry.

No idea why I thought of this today, but I remembered having written this and was mortified at having been so wrong. Lan is Malkieri, not Shienaran. A lot of shared customs, but not the same people.

It’s not a typical generic European village? I pretty much got the impression from the books that Emond’s Field was a pretty generic European style village. They even have a holiday where they dance around a maypole. Personally I think it was “open casting call, race irrelevant, because woke” and I’m fine with that. The production would have been raked over the coals online had our plucky band of adventurers been depicted as they were in the book.

Right, sorry, badly phrased on my part. EF is very clearly a quaint English-y village, so it’s easy (based on so many representations of quaint English-y villages) to assume that the inhabitants will be primarily white, and thus, that so many of the main cast being dark skinned will stick out and appear to be forced diversity. Instead (I assume) EF will have a much wider range of skin tones, averaging what would be pretty clearly “black” by modern American standards, with Rand sticking out by dint of being so distinctly pale.

Is it unrealistic, based on human genetics, for a town as isolated as EF for so long to have that wide a range of skin tones? I mean, maybe? But having seen the main cast together, they look a lot more cohesive than “hey, a white guy and a black guy and an asian guy and a hispanic guy all grew up in the same isolated village” or something like that.

The actor playing Mat Cauthon (one of the most important characters in the series, and a fan favorite in the books) has been recast for season 2, with Dónal Finn taking over the role. 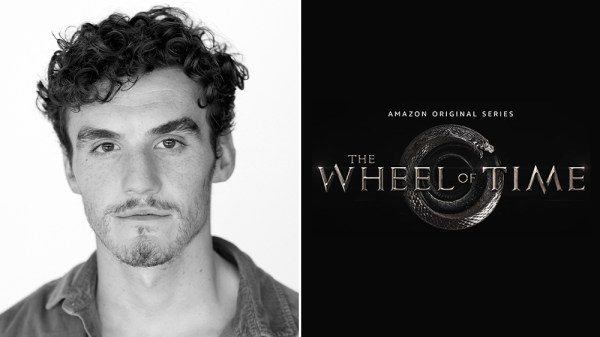 ‘The Wheel Of Time’: Dónal Finn To Play Mat Cauthon In Recasting On Amazon...

EXCLUSIVE: A major character on Amazon Studios and Sony Pictures Television’s high-profile fantasy series The Wheel of Time, headlined by Rosamund Pike, is being recast for Season 2. Dónal Fi…

The actor playing Mat Cauthon (one of the most important characters in the series, and a fan favorite in the books) has been recast for season 2, with Dónal Finn taking over the role.

Is it just me that feels really weirded out to learn that they’ve recast a major role for season 2 of a show that hasn’t even come out yet?!

I think it’s another sign that this is going to be a garbage fire of a series.

All the previews and interviews I’ve seen so far suggest (a) high production values and (b) a cast and crew who are passionate about the source material and are taking it seriously.

For all the issues that GoT ended up having, the fact that several roles got recast really never ended up mattering (granted, Daario, Myrcella and the Mountain aren’t as big characters as Mat).

I’m generally nervous about the casting and Matt getting recast is either a bad thing for season one or two. Everything else looks good so I’m still excited particularly that the books are over so the writers know where they are going if not how long they have to get there. With Harriet and Sanderson advising the producers and writers I think the story changes that are required to make it work for TV will be true to the story. I’d bet they try and hang Matt’s change on the artifact since it’ll make the most sense unless they just ignore it.

I did think it was weird that they didn’t cast Elayne until season 2.

I did think it was weird that they didn’t cast Elayne until season 2.

Yeah that is weird. Either the series will be extremely slow or they are going to dramatically edit the storyline, since she shows up as a major character pretty early in the first book.

Maybe in the first season, they just keep filming her from the back.

Right. That meeting is huge for Eladia if nothing else so I was more then a bit surprised that they’ve removed it.

As far as we know from casting rumors etc, none of the characters they “should” meet in Caemlyn were cast except Loial. So presumably they’re streamlining the book 1 plot by removing that entire set of encounters.

The question is, are they making that change because they’re too cheap to pony up for a nice set and hire the actors, or too lazy to care; or are they making that change because they genuinely thought about it and it was their considered opinion as competent and passionate artists that in the constraints of the television format, it makes more sense to introduce those characters later?

Again, I’m more than willing to give the benefit of the doubt. Getting the feel of the characters and the overall arc of the story is far more important than “wait, A was supposed to happen before B”.