"America was founded as a Christian nation," a guest preacher at my church claimed. Please help me dispute that

I don’t know, bobot. Take the red pill, and get back to me.

All this is an interesting example of where the OP conundrum comes from.

As mentioned, from every documentable source, the framers of the Declaration of Independence, Articles of Confederation, Constitution, Federalist Papers and Bill of Rights were creating this organized union, later federal republic, were constructing it on the basis of the Enlightenment Philosophers plus the Common Law. Not on the basis of the KJV.

The nation was constituted as a nation wherein the population was majority Christian, and the predominant sociocultural values and mores were Christian, yes. And many of the 13 colonies had institutional establishment of religion. That cannot be disputed. BUT, the Federal Republic, as created, nowhere is committed by its founding documents or by the words of their framers, to propagating and upholding Christianity. Liberty, yes, rule by consent of the governed, yes, fair trials, yes, sanctity of homes and of private papers, yes, protection of property, yes, the “pursuit of happiness” whatever that is, sure, throw that in also. The Praise and Glory to the Lord Jesus Christ and carrying the Good News to others? Appears nowhere.

That, @webwarrior, is our disagreement. At the time of founding, America was a “Christian nation” in that it was a nation of Christians living as such with many institutional norms based on Christian teachings. But America was not founded “as a Christian Nation” in some sort of sense that America, to be America, must live by Christian ways. The founders left that to each of us. It is not a function of “America” the institutional body to make us live on the righteous path, and it takes no legitimacy out of the American legal and political institution for it to adopt secularist-based policy.

Keep watching CNN and NPR – everything is okie-dokey

This is called the availability heuristic. If you see a lot of individual stories about something, like crime, you think it is widespread. That’s why for a long time people thought air travel was more dangerous than car travel - you got headlines about plane crashes.
You can’t judge the crime rate by the “if it bleeds, it leads” TV stations. Look up the statistics.

Plus, it is fallacious to assume that even if sorcerers use drugs, all drug users are involved with sorcery. But maybe you think Purdue Pharma is full of witches or something.

I agree with you that Paine was brilliant. You should read his “Age of Reason” some day, the book where he tears the Bible and Christianity to shreds.

It is hard to go online without seeing some mention or report of violent crime sweeping the nation. Search for yourself and see…dozens of pages.
100 Most Dangerous

I see a lot of Bible Belt cities in the top 25. From that I draw the completely valid conclusion that an excessive of religiosity is tied to violent crime. So we’d all be a lot safer in a city populated mostly or entirely by pagans or atheists.

Modnote: You’re failing to argue the content of the posts and are mildly attacking the posters with several of your replies. Please dial it down. I know you’re new, so I encourage you to follow our simple rules of debate.

You might want to review the rules for Great Debates and Politics and Elections:

Moderation in Great Debates and Politics and Elections In general, Great Debates and Politics and Elections are the most contentious fora on the SDMB. Because of that, you’ll find that moderation is more active and prone to sanctioning posters. You can compare it to sitting at the holiday dinner next to the crazy uncle who can’t help being unpleasant. Please don’t be that guy. Be aware that most rules are not ‘bright line’. This is intentional on our part as we believe such encourages poor …

This topic was automatically opened after 10 minutes.

You might want to take the tactic of accepting the conclusion, and then asking questions from there.

“So, if we are God’s chosen nation, why would he strike us with a plague in the fourth year of Trump’s reign?”

“If God wanted Trump to remain President, wouldn’t he have waited until after Trump’s Presidency to smite the US with a plague?”

“What sin were we being punished for re: COVID. Electing Trump?”

Along this vein, when online, I just throw my “Book of COVID” link at these people, then watch them froth.

the colonists fled either royalty or Empire. All of a sudden, they had all this free time with no one to tell them what to do and they couldn’t handle it.

Most of them were trying to build something similar to European living situations more or less from scratch, everything from buildings to gardens. All of them were trying to survive in a place with no infrastructure that they recognized as such and a climate and ecology that they didn’t understand. Why do you think they had lots more free time than they would have had if they’d stayed in Europe?

And why do you think the people who emphasized liberty in their founding documents did so because they wanted somebody to tell them what to do?

Amidst the enthusiasm for ideals, it is sometimes easy to overlook the fact that for most, the colonies attracted adventurers and businessmen. The religious idealists were vocal mainly in order to thwart, as I said in my orignal reply, a revival of the Inquisition.

Now you appear to be arguing that the nation at its founding was primarily secular.

When the Minutemen met the British at the bridge at Concord, they had soomething else in mind. Call it destiny.

I’d call it a desire not to pay their taxes.

Nowhere did I propose or support the idea that the Founding Fathers convened for the purpose of chartering a Christian nation. If anything, the Constitution was drafted in such a way as to prohibit a replay of what had been going on in Europe, (France, England, and the Netherlands in particular) where the heavy hands of some royalty and the fallen Empire of Rome has made life miserable for Northern Europeans. Individual freedom & individual rights – what a concept. My definition of the sad state the residents of Massachusetts found themselves in as a result of “too much time on their hands” is history. One year, they neglected to lay in provisions for the winter and the Indians had to bail them out from their storehouses. The Pilgrims were too busy partying. Yes, I likened the sloth of the colonists to the sad state of morality in America today. That set off a firestorm. Go figure.

The Pilgrims were too busy partying.

it is unsafe to walk the streets at night.

It’s not. I’ve been walking the streets of L.A. at night pretty frequently lately.

Violent crime in general is on a long term downward trend.

Maybe some does. But even if true, that doesn’t mean people using mind altering drugs are practicing sorcery.

Keep watching CNN and NPR – everything is okie-dokey

Crimes against Urban Households up 10%

Really? A one year increase? During a year like no other? That the best you got?

So if I eat mushrooms, am I a sorcerer only when I’m tripping, or do I become a sorcerer for good right then and there?

Does a candy flip make me super powerful?

One year, they neglected to lay in provisions for the winter and the Indians had to bail them out from their storehouses. The Pilgrims were too busy partying.

Cite, please, that their lack of laying in sufficient provisions for the winter was due to having spent too much time partying and not to other reasons: such as arriving diseased, not understanding or being equipped for the climate, and not understanding enough about the area to know how to make a living for themselves?

I thought the Pilgrims would whup your ass if you thought of not working on Christmas Day. Their theory was the Bible doesn’t explicitly mention Christmas so it’s not a holiday for them. So the furthest thing from party animals.

The Pilgrims and the Puritans actually don’t comport quite with many of the conceptions we have of them. While there was a streak of teetotaling in them, by all accounts when drink was available they did drink heavily. At Plymouth they didn’t have alcohol though early on, in fact the ships had run out of alcohol around the time they disembarked.

The most significant reason the Plymouth settlers had poor stores for the winter is they had essentially no fucking clue what they were doing. They weren’t professional colonists, they were people of mixed occupational background who had lived in England, then moved to Holland to prepare for their trip, and had no real familiarity with what plants grew or how to grew them properly in the New England environment.

That set off a firestorm. Go figure.

A firestorm where? In this thread?

Are you going to retract your claim that crime has been increasing since 2008? Or, at least provide some counter-cite for the ones provided to you?

Cite, please, that their lack of laying in sufficient provisions for the winter was due to having spent too much time partying…

I think it’s an established fact that the pilgrims were heavily into sorcery.

Don’t bother with it – it’s your average Jack Chick type of crankery.

You might want to take the tactic of accepting the conclusion, and then asking questions from there.

“So, if we are God’s chosen nation, why would he strike us with a plague in the fourth year of Trump’s reign?”

“If God wanted Trump to remain President, wouldn’t he have waited until after Trump’s Presidency to smite the US with a plague?”

“What sin were we being punished for re: COVID. Electing Trump?”

31 So Moses went back to the Lord and said, “Oh, what a great sin these people have committed! They have made themselves gods of gold. 32 But now, please forgive their sin—but if not, then blot me out of the book you have written.”

33 The Lord replied to Moses, “Whoever has sinned against me I will blot out of my book. 34 Now go, lead the people to the place I spoke of, and my angel will go before you. However, when the time comes for me to punish, I will punish them for their sin.”

35 And the Lord struck the people with a plague because of what they did with the calf Aaron had made. 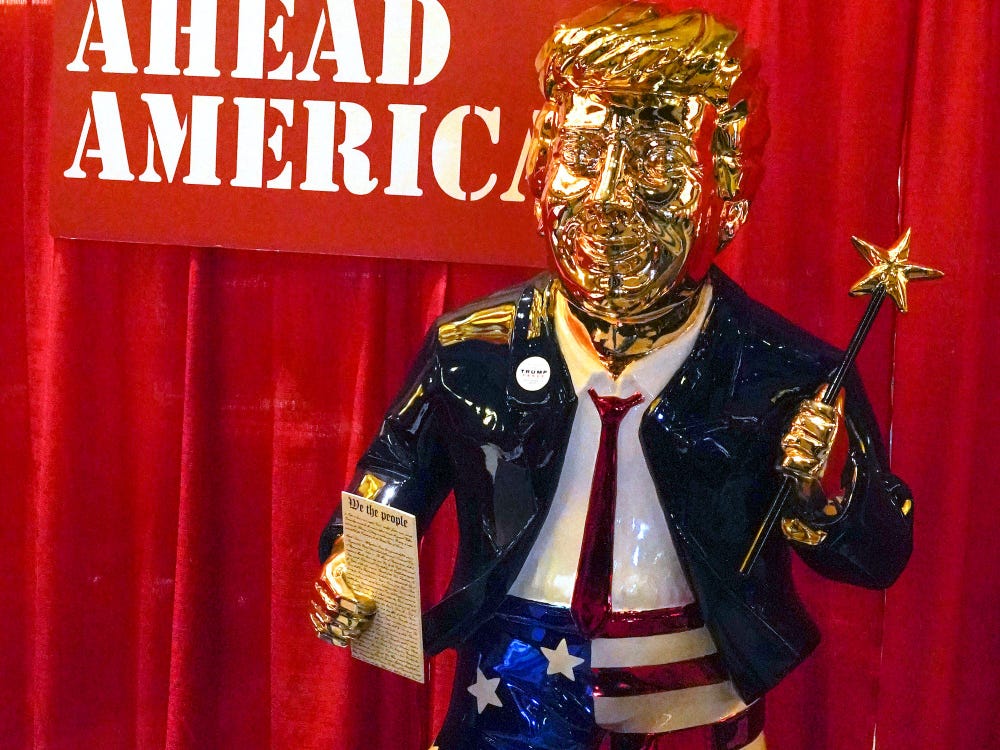 The Pilgrims were too busy partying.

I thought the Pilgrims would whup your ass if you thought of not working on Christmas Day. Their theory was the Bible doesn’t explicitly mention Christmas so it’s not a holiday for them. So the furthest thing from party animals.