“According to my careful prosthesis, you’ve got The Plague.” - Firesign Theatre

Turns out a bunch of Swedes probably died of the Plague roughly 5000 years ago:

In a nearly 5,000-year-old tomb in Sweden, researchers have discovered the oldest-known strain of the notorious bacterium Yersinia pestis — the microbe responsible for humanity’s perhaps most-feared contagion: the plague.
The finding suggests that the germ may have devastated settlements across Europe at the end of the Stone Age in what may have been the first major pandemic of human history. It could also rewrite some of what we know of ancient European history.

Plus, I hear they frequently lost their cattle due to chronic underuse of devices designed to make noise when the cattle move.

Plus, I hear they frequently lost their cattle due to chronic underuse of devices designed to make noise when the cattle move.

You are a very bad person. Never change.

I wonder what the next-oldest Y. pestis is.

Small, scattered bands of hunter-gatherers don’t have resistances to them for the very good reason that they don’t get that kind of disease – if plague evolved in a small band of hunter-gatherers, it would be highly likely to die out with them before spreading to anyone.

So Yersinia pestis couldn’t evolve into the form that afflicts humans until human population density reached a certain point – almost certainly after the development of settled agriculture and the attendant explosion of human population roughly 10,000 years ago.

Somewhere in time and geography was the first outbreak - the moment the plague bacteria invaded humans and became adapted to living in us. Is it possible that this find is that moment? Ground zero for one of humanity’s deadliest enemies?

Yes and Yersinia pestis had the perfect dense population - ground-nesting, colonial rodents. Remember this is a zoonosis, not something that evolved in humans. Recent evidence seems to point to it being ~20,000 years old.

So, are you saying they had a fever?

In general the typical Anthropological theories still tend to discount the mounting evidence that trade and contact was greater than expected by the currently earlier theories.

“These results suggest that sophisticated social networks linked the Neolithic front in southern Europe to the Mesolithic peoples of northern Europe,” the researchers concluded. 
In Britain, the steppe pastoralists may have arrived to a depopulated area too.

“It’s not necessarily a story of violent conquest,” Armit said. “There is some evidence of a declining population and increased growth of forests, suggesting that agriculture was in decline. We could be looking at climate change, or even an epidemic of imported disease to which they had no resistance. But we certainly now have the evidence that they were replaced – and they never came back.” 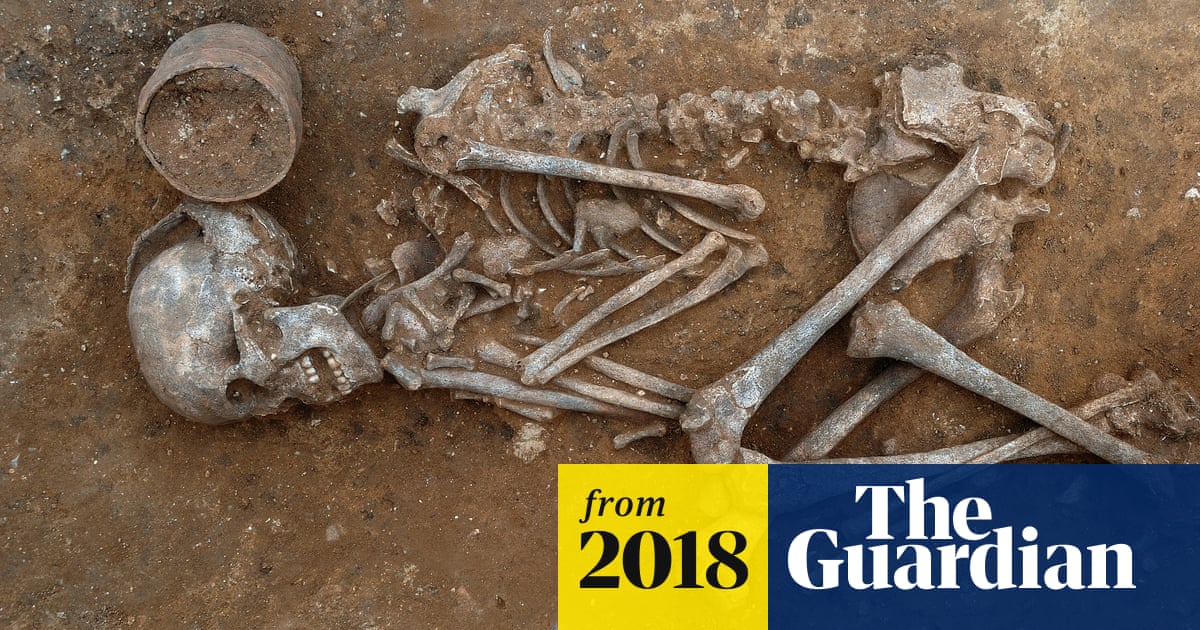 At least 90% of the ancestry of Britons was replaced by a wave of migrants, who arrived about 4,500 years ago, say researchers

While without the wheel and draft animals the quantity of trade was probably small, similar to the known networks in the pre-contact American South West; I expect that most of the current theories about mass-migrations and replacement are more about re-population with the skirmishes being against decimated populations.

Beaker is found in digs dated to 4460–3990 BP, which could be due to this type of event depopulating and destabilizing existing peoples more than an overpowering conquest that is commonly attributed to the change.

While not exactly the same due to the known introduction, colonization of the Americas would have most likely been far less successful and complete without the huge losses in population due to introduced diseases. I expect a similar more complex story to replace the fairly simplistic ones in Europe as more evidence like this is found.

It will be interesting to see where this all leads to over the next decade or so.